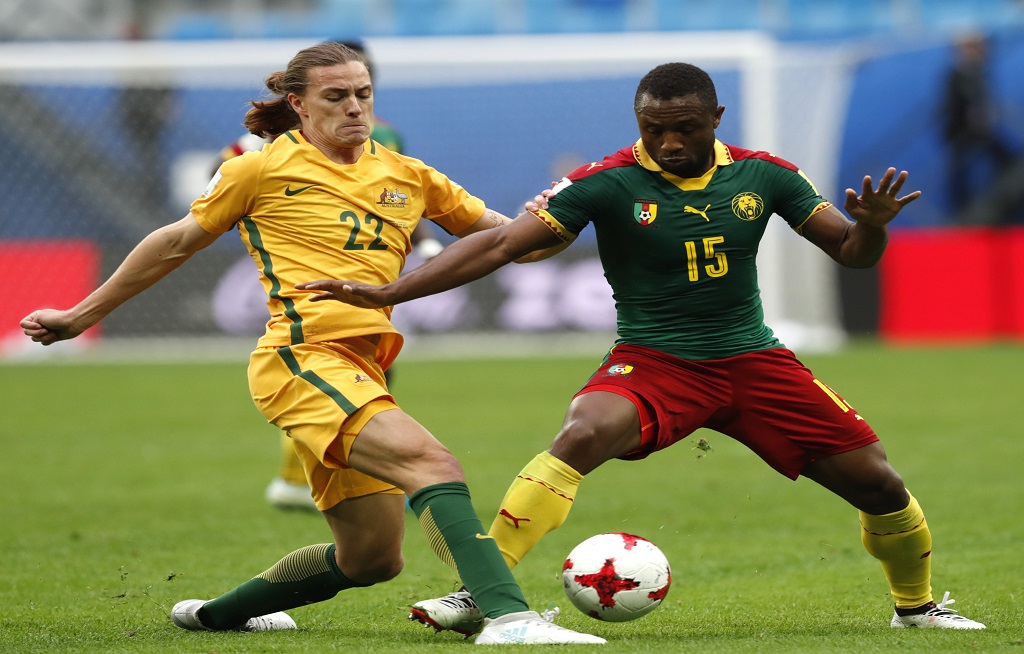 Sebastien Siani of Cameroon and Jackson Irvine of Australia in action during the FIFA Confederations Cup 2017 group B soccer match between Cameroon and Australia at the Saint Petersburg, 22 June 2017.

SAINT PETERSBURG – Cameroon and Australia played out a 1-1 draw in Saint Petersburg, with a point aiding neither of their hopes of reaching the FIFA Confederations Cup Russia 2017 semi-finals from Group B.

Another ponderous start had seen Cameroon lacking rhythm but, as the half wore on, they found their feet before Andre-Frank Zambo Anguissa lofted the ball over Australia goalkeeper Maty Ryan right on half-time.

Goalkeeper Fabrice Ondoa of Cameroon and teammate Adolphe Teikeu in action against Tim Cahill of Australia during the FIFA Confederations Cup 2017 group B soccer match between Cameroon and Australia at the Saint Petersburg stadium, Russia, 22 June 2017. (EPA / GEORGI LICOVSKI / BACKPAGEPIX)

Cameroon should have been two to the good but were left ruing Vincent Aboubakar’s miss when Socceroos captain Mark Milligan slotted home from the penalty spot.

Cameroon's Siani: "Sometimes the team that is supposedly the weakest can upset the odds so we are not going to be complacent." #ConfedCup pic.twitter.com/IpKQFA9cmV

The African champions looked most likely to find a winner, primarily through the Besiktas forward, but they could not convert.

Christian Bassogog of Cameroon (L) and Alex Gersbach of Australia in action during the FIFA Confederations Cup 2017 group B soccer match between Cameroon and Australia at the Saint Petersburg stadium in St.Petersburg, Russia, 22 June 2017. (EPA / SRDJAN SUKI / BACKPAGEPIX)

Having scored the opening goal of the evening with a coolly-taken lob, lifting the ball over Ryan on the run, Andre-Frank Zambo Anguissa was named Budweiser Man of the Match.