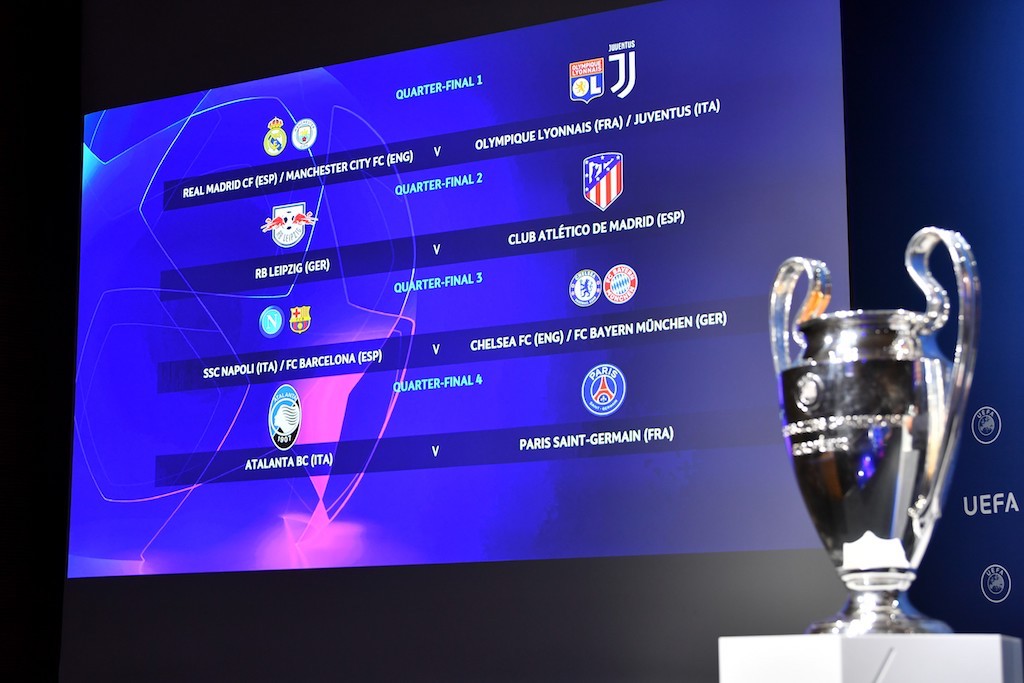 PARIS - The final eight of this season's Champions League in Lisbon is set to go ahead behind closed doors after UEFA confirmed Thursday that all matches in European competitions would be played without spectators "until further notice" because of the coronavirus pandemic.

The decision also affects the four outstanding last 16, second-leg matches, as well as the remainder of this season's Europa League and the women's Champions League final eight, to be played in Spain in August.

"Several elements were taken into account by UEFA when making a decision, such as the protection of the health of all those involved in the matches as well as the public at large; a responsibility to provide the safest environment for matches in order to guarantee the progress of competitions; as well as ensuring sporting fairness within a very inconsistent landscape (with some countries allowing and some forbidding stadium attendances)," European football's governing body said in a statement.

It added that "in light of the current situation, the UEFA Executive Committee felt it prudent to conclude that UEFA matches should take place behind closed doors until further notice."

UEFA said the decision had been made "in agreement with the national associations and authorities of the final eight tournaments' hosts Germany, Portugal and Spain".

It also confirmed that "irrespective of any future decision, for reasons of sporting fairness", all matches in the qualifying rounds of next season's European competitions which are due to be held as a single-leg ties -- so not including the play-offs for the Champions League -- will be played behind closed doors.

Meanwhile, the remaining last-16 games, which were postponed in March because of the coronavirus pandemic, will not be played on neutral grounds when they finally go ahead in August.

UEFA had indicated last month that the matches could be played in the northern Portuguese cities of Porto and Guimaraes depending on the health situation around the continent.

However, following a review, UEFA has decided to allow those sides who were supposed to be at home to play the matches in their own stadiums on August 7 and 8.

It means that Italian champions Juventus will host Lyon in Turin looking to overturn a 1-0 deficit from the first leg played in France in late February.

Manchester City will defend a 2-1 lead when they entertain record 13-time champions Real Madrid at the Etihad Stadium, while Barcelona will host Napoli at the Camp Nou with that tie poised following a 1-1 draw in the first leg.

The other outstanding tie will see German champions Bayern Munich entertain Chelsea at the Allianz Arena in pole position having won 3-0 in the first leg.

The winners of those four ties will join the already-qualified quartet of Atalanta, RB Leipzig, Atletico Madrid and Paris Saint-Germain in the last eight.

The Portuguese capital was announced as the venue in June but has since registered worrying numbers of coronavirus cases, with lockdown restrictions reimposed last week on 19 neighbourhoods across the northern periphery of Lisbon.

The restrictions concern some 700,000 people and will remain in place for at least a fortnight.

The Europa League will also be completed with an identical format, a final eight in Germany, with the final in Cologne on August 21.

However, none of the last-16 ties have been completed, with only six of the eight first legs having been played.

The other two ties -- Inter Milan v Getafe and Sevilla v Roma -- will be played as one-off ties in Germany.

The women's Champions League will be completed with a final eight in San Sebastian and Bilbao in Spain's Basque Country between August 21 and 30.