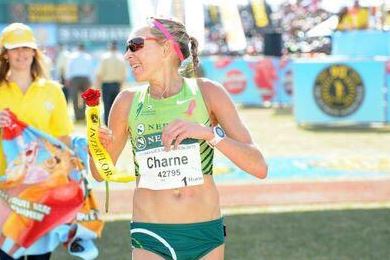 JOHANNESBURG – South African Charne Bosman won the women’s Comrades Marathon in a time of 6 hours 25 minutes and 55 seconds in the 89km ultra-race from Pietermaritzburg to Durban on Sunday.

Bosman beat out defending champion Caroline Wostmann 6:30:44, who had opened up an 11-minute gap at one stage, for top-honours. Wostmann had looked set to repeat her win in 2015 when she won by over 20 minutes, but battled cramp, injury and even a collision with a race motorbike in the latter stages of the event.

Bosman had never claimed victory in an ultra-race before but her steady pace throughout helped her pass Wostmann in the final two kilometres, and power through to a breakthrough victory.

Wostmann took the initiative early on, and began moving ahead near halfway as she upped her pace per kilometre by five seconds to 4:06 per km. Wostmann eased through Drummond Hill in 3:07:54. In second place was Bosman in 3:12:05, just over four minutes behind Wostmann.

The defending champion continued to increase her average pace throughout the race, forging an 11-minute gap between herself and Bosman. Like she did in 2015, Wotsmann took a walking break up Cowies Hill with around 17km to go. She used the break to take in an energy drink before she began running again. Less than a minute later, however, Wostmann stopped again to take another sip of her drink, but it would prove to be an even shorter break as she resumed her race pace with relative ease.

A third walking break followed, at the 5:30 mark for Wostmann but again she resumed quickly. It was at that point that Wostmann ran into a race motorbike which fell to the ground as a result.

Slow-motion replays showed that Wostmann had been reaching for a drink at one of the water stations, but the bike was way too close and the collision resulted. Wostmann, fortunately, was unharmed and continued on her way.

But the walking breaks continued for Wostmann as she did indeed look to be battling cramp or injury.

Further walk breaks continued for Wostmann as her gap at the front kept reducing.

At 5:45 into the race, Wostmann appeared to be struggling noticeably with her running style and rhythm before she fell. She got up slowly and even more sedately started running again.

Up another hill just before the 6-hour mark, Wostmann was reduced to walking for an entire minute once again as she appeared increasingly disorientated.

Eventually, Bosman came flying past with the finish at Kingsmead in sight, while Wostmann walked most of the way to the finish. – African News Agency (ANA)

SHE DID IT! Congratulations to Charne Bosman who won her first Comrades in a time of 06:25:55. What a race! ProudlySouthAfrican

It&39;s been a hard fight,and @charnebosman has earned it. Congrats on taking the title of Comrades2016 champ with a time of 6:25:55

She finished so strong! What an incredible athlete! Charne finished with 6:25:55 pic.twitter.com/E3nJOuox0w