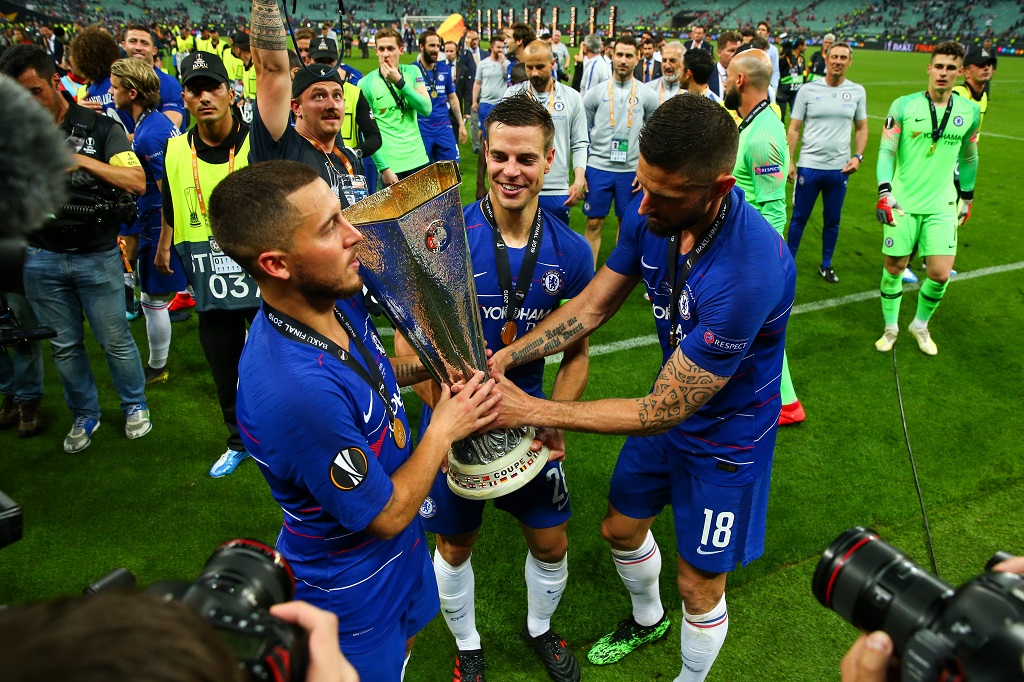 BAKU - Eden Hazard helped make it a night to celebrate for Chelsea in Baku, but the Belgian's confirmation that it was almost certainly his last game for the club opened the way to a summer of uncertainty at Stamford Bridge.

Hazard scored twice, including a penalty, and set up another goal for Pedro Rodriguez after Olivier Giroud had set Chelsea on their way to an emphatic 4-1 win over London rivals Arsenal in the Europa League final in Azerbaijan.

Maurizio Sarri's side deserved their victory as they won the competition for the second time in Hazard's seven-year spell at the club.

They will be back in the Champions League next season, by which time Hazard looks set to be wearing a Real Madrid shirt.

"I have made my decision already and now I'm waiting on both clubs. I think it is a goodbye, but in football, you never know," Hazard told BT Sport after the game.

The 28-year-old, whose Chelsea contract expires next year, has long been linked with Madrid and all signs point towards a transfer that could be worth in the region of 100 million euros ($111m).

"My dream was to play in the Premier League and I have done that for one of the biggest clubs so maybe now it is the time for a new challenge."

Chelsea has known this moment was coming, but it is a huge concern for a club who are facing up to a FIFA-imposed ban on signing players in the next two transfer windows, pending an appeal to the Court of Arbitration for Sport.

"I have a special relationship with him on the pitch and off it. He's a mate. I am really happy for him and for his future. We will miss him," said Giroud.

"He deserves it too, after seven years of good and loyal service to Chelsea. He deserves a new challenge."

Hazard will now hope to go on and win the Champions League, a trophy Chelsea lifted in 2012 just before signing the Belgian from Lille. In his time in west London, Hazard has won two Premier League titles, one FA Cup and a League Cup as well as two Europa Leagues.

"I knew. I knew Eden wanted to leave, of course, but as I said in every press conference, I wanted to respect his decision," said Sarri.

This was the former Napoli coach's first major trophy in management at the age of 60, at the end of a season in which he also steered Chelsea to third place in the Premier League to secure a return to the Champions League before this game, but it remains to be seen if the Italian will stick around for a second season.

He has struggled to win over supporters at Stamford Bridge and has been strongly linked with a move to Juventus.

The vacancy at the Serie A champions may be infinitely more tempting than staying to pick up the pieces at Chelsea without being able to sign a replacement for Hazard.

"We need to know what the club can do for me, what I can do better for the club. Then in a couple of days we will decide, but I have a contract so at the moment we are talking about nothing."

Any talks with Granovskaia and owner Roman Abramovich - who was present in Baku - are likely to centre around what sort of squad Sarri would have at his disposal next season.

"You know very well that I love the Premier League, the level of the competition.

"I am lucky because I am at Chelsea, one of the best clubs in the Premier League, in the best championship in the world, so at the moment I am happy, but of course I want to know if the club is happy, if we can improve."