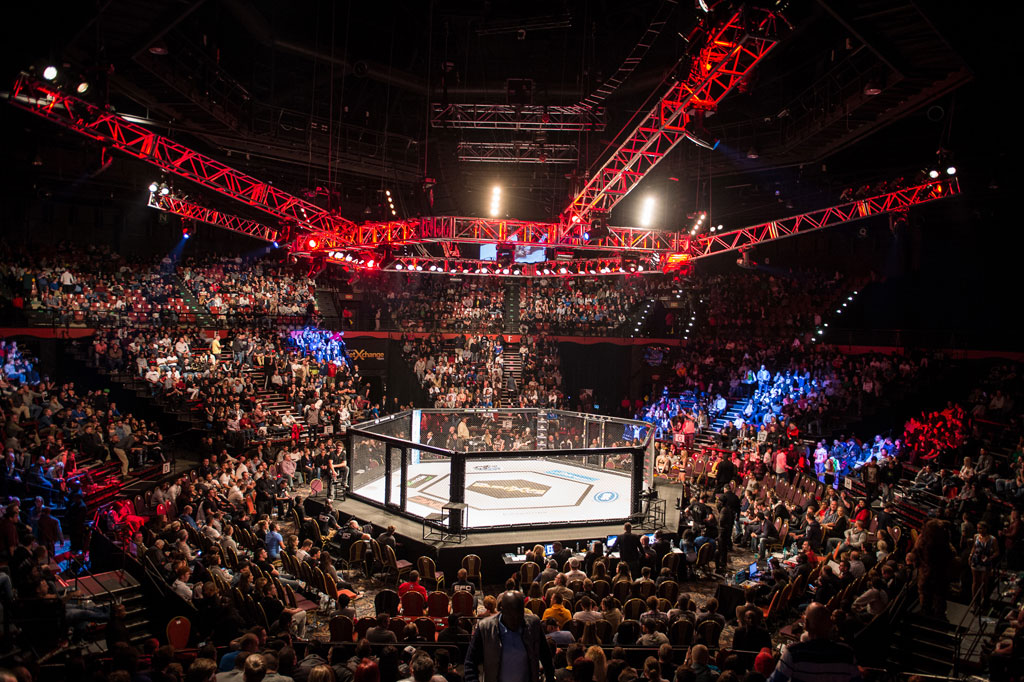 You can’t please every spectator in MMA.

Some want knockdowns and knockouts and a different demographic want scrambling and submissions.

Both groups represented strongly at EFC 41 on the East Rand this past Saturday evening, and were treated to six balls-to-the-wall wars that ended in the first round, and four drawn-out campaigns that went the distance.

I’ll start with the latter, but if you want to presage that with the massive breaking news of the returning son of Zeus at next month’s EFC 42 in Cape Town, scroll south on this page and don’t forget to pick your jaw off the floor afterwards.

After a first round in which Doyle threatened to invest in an account opened by his trash talk, it quickly transpired that his assets had been overestimated and a taxing Pena began exacting interest.

The Angolan put on a striking master class, peppering Doyle with the eight limbs from distance and never looking in danger with the laceration above the Wolf’s left eye insufficient to impede his laser-homed munitions.

As a former Air Force officer, Doyle should have experience in dealing with an airborne arsenal such as Pena’s, but perplexingly seemed unable to deploy counter-measures to control the distance and mount any form of offense whatsoever.

Thereafter the ‘Dominator’ suffered beneath his own cognomination for four enervated rounds.

As anyone who admires such outstanding natural athleticism I would have liked to witness Pena not only opening a can but blowing up the entire tin factory.

But it was not to be. Perhaps cautioned by the initial plasma-producing orbit wound and therefore content to reduce Doyles ITB’s to passata, the champion directed and determined the course of the whole bout to be bearing the burnished bantam belt at the bell.

If Pena vs Doyle was stand-up schooling, the co-main event was an exposition of grappling and indomitable resolution.

I’ve heard that CIT coach Morn Visser is lus for a rematch based on two rounds being scored 29-28 from the judges, but on second viewing the hindmost championship rounds seemed to consist entirely of Michiel Opperman defending his thorax off his back from Liam’s unremitting submission attempts, something The Dark Horse admitted to me after the post-event press conference. Understandably Cleland was cock-a-hoop with his metallic souvenir after a gruelling four-year campaign in the division.

Take a look at the following video of both athletes, an insightful instruction to some on how to be a courteous loser and magnanimous winner after a five-round war that garnered the evenings Fight Of The Night honours.

I have mixed feelings about this one. Principally because both men will always venture forth and swing like a clippers jib.

Unfortunately the fight becalmed before it really began with the foes mutually rapidly depreciating cardio, rendering the spectacle of two heavyweight warriors into mosquitos in amber.

My mind boggles at what Danie van Heerden’s record could be if he had the work ethic of someone like Pena; he really should be duking at Light-Heavy and not buying shares in Spur at Heavyweight.

I certainly wouldn’t expect him to return to middle where he struggled to make weight against Soldierboy three years ago, but his conditioning and fitness never synchronises with a sportsman who starves for buckles and bucks.

As for Bernardo Mikixi, he cracked his right hand with bone breaking skin with the first punch of the fight. Tellingly this had scant effect upon Van Heerden’s consciousness and the Angolan valiantly continued to the mid-point of the second round before failing to rouse to his feet at the behest of the ref.

At this point both were sucking in air like industrial turbines in what was a wholly unfulfilling conclusion to a contest that like their records, could have been so much more. Mikixi’s in particular now reflects more wins than losses at 5-6 while Van Heerden improves to 13-8.

I don’t know where Mark Hulme was on Saturday evening but his lack of violent conviction was notably absent. It’s a cheerless observation that whilst Lyle Karam didn’t put a foot wrong he wasn’t particularly outstanding.

Mind you, being undefeated in the EFC at 19 years of age with a blinding sunny disposition and a natural wrestler’s build is a pretty good portend for future glory. Team CIT will nurture and relish his PMA as Fight Fit will seek renovate Hulme’s. And honestly, I don’t think that’s a big ask.

I have a hunch that there’s a deep remote reason why Hulme fights and I haven’t figured it out yet, but it obviously gives him fuel and drive, which once tapped in full flow has the capacity to burn anyone at Welter. Equally greenhorned at 21 years of age, Sunninghill has plenty of time to reignite Hulme’s flame.

Look, Wesley Hawkey never was a total couch slouch on the mat so it’s difficult to gauge pragmatically the real effect that Morn Swanepoel has had upon the Young Assassin’s ground game, particularly when he submits his opponent with three seconds remaining in the first stanza.

I have to admit it was a consummate performance from the Bluff lad but far too concise to enthuse about at length. An ineffective Tumisang Madiba, who last year disposed of Pierre Botha by a first round guillotine, really should start concentrating on defending his own back, which is hopefully nothing that an extended horizontal schedule at Rio Grappling wouldn’t fix.

I have a great deal of compassion for the Danubian Varju, who travels far, interviews well, works the media and makes weight with all the professionalism we’ve come to expect from a Gracie fighter. But her opponent hit the scales a bewildering four kilograms heavier than her opponent, which 24 hours later can translate into twice as much, a completely unacceptable situation that translated into brute strength nullifying ANY form of technique.

Varju valiantly sunk in the armbar twice, only to be picked up like a matchstick and slammed into the canvas like a discarded ragdoll. Jacqueline Trosee who forfeited 30% of her purse to Varju won by TKO in the second round but lost by respect in the first.

The newbie from Newlands seems a thoroughly decent and deferential martial artist and your correspondent truly hopes she translates that respect into parity of ballast next trip in the Hex.

EFC 42 – Cooking Up A Cape Storm and Hercules en Reprsailles

I’ll preview 42 in a forthcoming edition of The Clinch, but there are two pre-eminent issues that command discourse immediately.

Firstly I can exclusively reveal that Henry Fadipe is returning to the Extreme Fighting Championship after exactly a year’s absence to the day since losing his Welterweight belt to Adam Speechly. He takes on the veteran Congolese wrestler Francois ‘The Frenchman’ Kabulu to complete the 42 enchilada.

Whilst I am beyond piqued at ‘Herculeez’ restoration, I am somewhat anxious about how he matches up against a ground specialist like Kabulu considering the manner in which he lost the strap.

Perhaps relegating his past private troubles and a camp switch to Andy Ryans place in Finglas has freed Prometheus once again and lifted the curse evermore. We find out at 8pm on the 8th of the 8th.

As soon as the curtain drew down over 41, EFC Management held a press conference immediately with both fighters and their trainers, Richard Quan and Quentin Chong respectively, and what occurred probably shouldn’t have shocked anyone, take a look.

Two very different approaches to intensity and passion with Chef in particular the epitome of Selachii confidence and hunger, but I’ll leave you with the posting from his Instagram account the very next day that punctuated the question that will only really be answered next month in the Mother City. See you then.

A photo posted by Graeme Cartmell (@efcgraeme) on

EFC 42 takes place on Saturday the 8th of August at Grandwest in Cape Town.

The Prelims take place at 16:15h and the main card available live on DSTV commences at 20:00, the latter being available online to our European chums on ESPN Player.

If you have any thoughts of observations about South African MMA you can tweet me @Schooman.