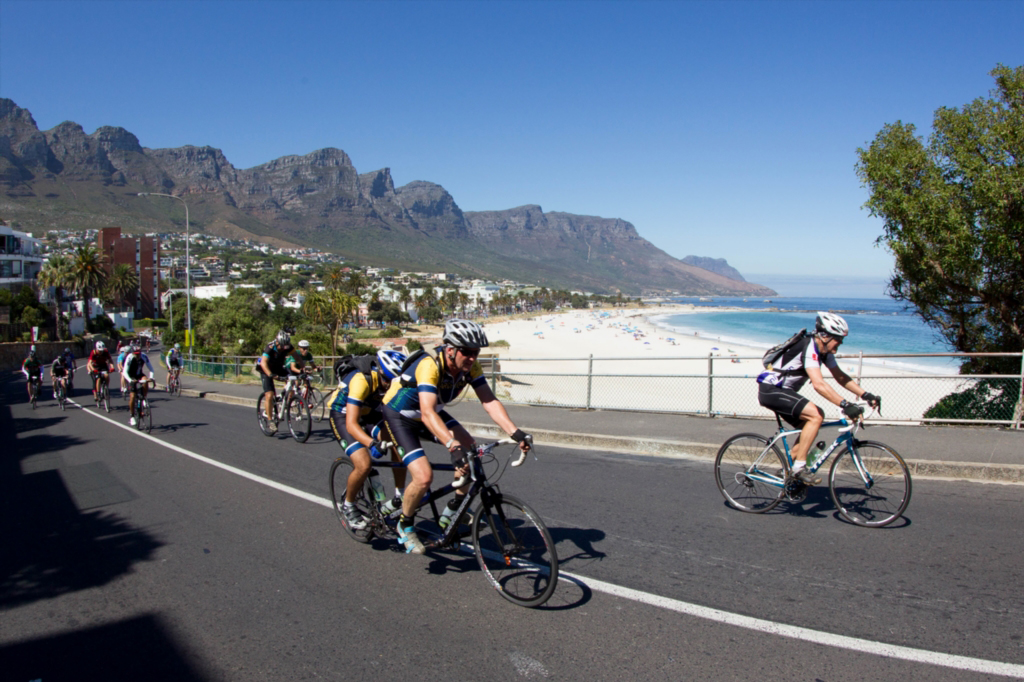 CAPE TOWN - Clint Hendricks, from team RoadCover, took first place in a time of 2 hours 35 minutes and 31 seconds (2:35:31) in a sprint finish in the Cape Town Cycle Tour on Sunday.

The 109 kilometre route played into the hands of tactical team racing, and with a number of cyclists gunning for the win, a group of three made a dash for the line with Hendricks coming out on top.

Retweeted In the Bunch (@In_the_Bunch):

Hoffman, who won the race in 2014 and 2015,  was unable to complete a hat-trick of consecutive tour wins.

Hendricks was suitably chuffed with his victory.

He said, “It’s been a long time coming – being second and third for as long as I can remember. To pull this one off for the team is the best feeling ever. I think this is the biggest race in the country, I just couldn’t ask for anything better.

“Today in the first five kilometres I knew my legs were feeling strong so I knew I was going to be good today. Coming second to Nolan was always like being in his shadow, and to get one up on him here in this race, I’m pretty happy with that. I will savour this victory for a long time.”

Julius said it was a tense finish to a difficult race.

“Going down to the finish it was always a bit of a gamble. I was very surprised at my sprint finish, I got a gap and just went,” said Julius.

“We had to go hard at Suikerbossie to break up the field. We knew Nolan was a threat. As a Team we decided to start going at Chapman’s. We tried to keep up a hard tempo and up Suikerbossies we destroyed the field.”

Hoffman, meanwhile, was disappointed at not being able to defend his title.

“It was not the result we were hoping for,” said Hoffman.

“We took charge from the beginning, but I wasn’t good on the climbs today. The Dimension Data boys rode so strong and we were on the back foot going up all the hills. Suikerbos took all my strength from me and I couldn’t get in my usual strong sprint finish.”

In the early stages of the men’s race there was a significant crash involving at least eight cyclists on hospital bend at the first real climb on the route, but none of the race favourites were involved.

At 35 minutes into the race before Muizenberg, Nicol Carstens broke away from the group and began attacking on his own. By the 54 minute mark, Carstens had opened up a 40 second gap on the chasing pack led by Team Telkom. But the main peloton caught Carstens as he began to tire into the strong headwind at Smitswinkel just under the 70 minute mark, 49km into the race.

Morne van Niekerk then took up the reins for Team Telkom up the steep slopes of Smitswinkel in increasingly windy conditions.

At the 61km mark through Scarborough, a group of around 15 riders took up the lead with Team Dimension Data and Team Telkom taking turns at attacking the front.

The next breakaway was led by Jaco Venter and Jared Hattingh with just over 90 minutes gone and under 50km left to the finish.

As the riders passed through the breathtaking views of Chapman’s Peak, 30 men emerged still gunning for a top placing at the 82km mark.

With the leading men passing through Hout Bay with 89km under the belt, James Reid took the lead with the chasers beginning to spread out in preparation for a sprint finish.

With 11km left, Hoffman was some 20 seconds from the front.

And just ahead Keagan Girdlestone took up the lead, frequently moving ahead of a leading pack of three riders with less than 5km left. But as it had threatened for much of the final third of the race, it came down to a sprint finish where Hendricks would emerge victorious.

An-Li Kachelhoffer powered to victory in a sprint finish to cross the line in 2 hours 51 minutes 26 seconds (2:51:26) in the Cape Town Cycle Tour women’s race on Sunday.

She held off defending champion Lynette Burger to claim the title.Third was Namibian Vera Adrian. Both Adrian and Burger crossed the line in the same time as Kachelhoffer.

It was a chaotic beginning with the elite women starting out just two minutes ahead of the men’s field and they were caught within the first five kilometres. It made life difficult for the elite women as they were part of much larger groups than usual.

A small group of women cyclists came through Chapman’s Peak in with a shout of victory. But ultimately it would be Kachelhoffer who would go on to to take the title.

Kachelhoffer said it was the biggest win of her career.

“I’ve been looking forward to winning this race my whole career. Coming back from the Continental Champs where I came second, to take the top step on the podium … I’m just over the moon,” said Kachelhoffer.

“Going up Chapman’s I put in quite a big effort to split up the bunch. And over Suikerbossie I went again. It was a crazy mess of a ride and I just managed to wriggle my way through to the line.”

Kachelhoffer said she was planning her year around the Rio Olympics.

“I’m on a long list for the Olympics, I’ve learnt that your slot is never safe. I’m going over in April for the European season before coming back here in June with the main focus on the Olympics.”

Despite not being able to defend her title, Burger was pleased with her runner-up placing.

“Unfortunately I couldn’t finish it off, but I’m still very happy with second place,” said Burger.

“We had a separate start, but the men were just two minutes behind us. So they caught up with us in the first five kilometres. Still, we managed some good racing today with some of the slower veteran men, even though they’re still very fast.

“I remember racing with her [Kachelhoffer] last year, and she did everything to help me to the win. It’s almost good payback for her even though she’s not on the same team. She’s very strong at the moment.”

Adrian, like Burger, was pleased with the top-three finish.

“I’m very happy with third and my team Time Freight, they got me up the climbs and motivated me all the way,” said Adrian.

Adrian said having the men join the elite women’s bunch definitely had an effect.

“It’s more hectic, you have to keep your nerves. There were so many people, there was screaming but I think that helped us to a faster time.”

Overall, Adrian was more than satisfied with the race outcome.

“An-Li rode very strongly on the climbs. I guess I’m not a good climber yet. The last kilometre I cramped really badly and I just couldn’t give anymore than I did.”

SAA Finds Its Wings | WATCH | SAA takes to the skies