Domingo: No scope for De Villiers in gloves in ODIs 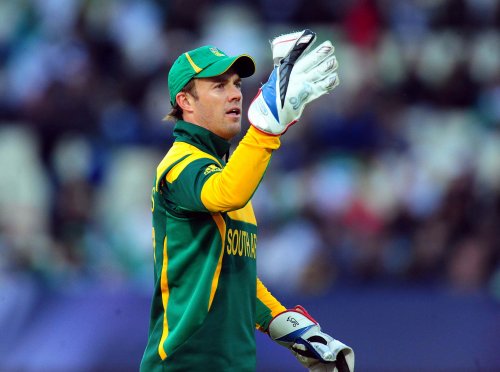 Proteas captain AB de Villiers won the toss and elected to bat in the fourth one-day international against Sri Lanka.

PORT ELIZABETH - With the World Cup edging closer, Russell Domingo is adamant he does not want AB de Villiers keeping wicket for the Proteas in One-Day Internationals.

De Villiers donned the gloves in the first two Tests for wicketkeeper Quinton de Kock, who injured his ankle in a warm-up session on day three of the first Test in Centurion on December 19. The injury was said to take six to 12 weeks to heal, placing the 22-year-old in doubt for the World Cup starting in February.

"In the one-day set-up, he&39;s [AB] found keeping much more tiring than in Tests. It&39;s a big burden on him in one days because of the captaincy, and being the so-called best batter in one-day cricket," said Domingo after his side drew the rain-hit second Test against the West Indies in Port Elizabeth on Tuesday.

Ahead of the World Cup in New Zealand and Australia, Domingo was reluctant to name Morne van Wyk as the obvious replacement, even though he is the only other wicketkeeper left in the 30-man preliminary World Cup squad.

"I need to sit with the selectors. There&39;s definitely times when he&39;s [AB] going to have to keep. For the balance of our side it&39;s a good thing for AB to keep.

"We&39;re fortunate that Quinton has been outstanding with the bat. Whether he&39;s keeping or not hasn&39;t been that important because he&39;s been so good with the bat."

De Kock had made a phenomenal start to his 35-ODI career, having already notched up six centuries at an average of 43.58 and a strike rate just under 89 opening the batting, and would definitely be a key member of the World Cup squad for the Proteas.

In De Kock&39;s absence, Van Wyk would have to be the man for the job, considering he is second in the run-scoring charts and boasts the best average in the domestic one-day cup at the halfway stage this season. The 35-year-old averages 176.5 including two centuries and a remarkable top score of 175 in the competition.

That innings was part of world record list, an opening partnership with Cameron Delport for the Dolphins where the pair were unbeaten after 50 overs amassing a staggering 367 runs for no wicket.

Still, Domingo, when pressed, would not confirm Van Wyk as his man for the job.

"There are definitely times when AB is going to have to keep in some one-day games for us. When there is an opportunity for him not to keep, we&39;re hoping to pursue that as well. I&39;m sure we&39;ll have another keeper in the one-day set-up. How many games that guy will play we&39;ll need to evaluate. There will be another keeper in the one-day side now that Quinton is not there."

On opener Alviro Petersen, who has not scored a Test century for 25 innings, Domingo said he expected his player to score a big one soon, but said the 34-year-old would be feeling the pressure.

"The big score might come next week and then we&39;ll probably be going with him a bit longer. He knows that if he doesn&39;t score soon he&39;s under massive pressure.

"The conundrum we sit with is that he&39;s an experienced player, he&39;s a hell of a slip fielder. He offers a lot to the team space at the moment as a senior player."