Guptill 237 takes wind out of Windies 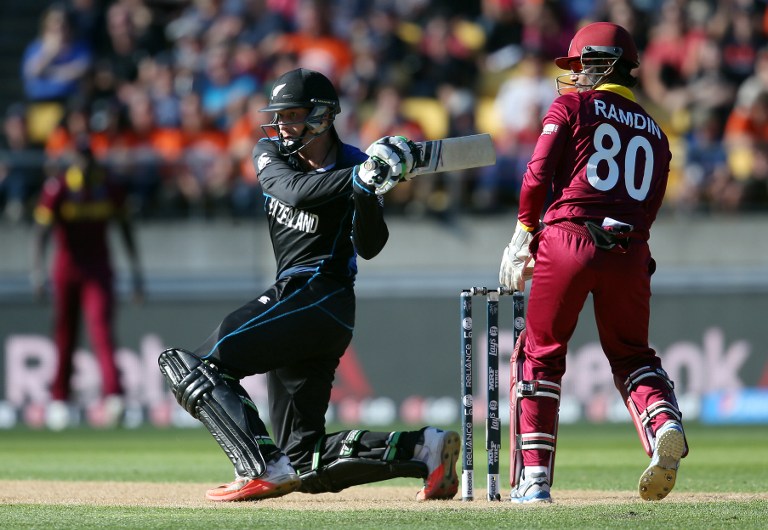 WELLINGTON - Martin Guptill followed up his century in the previous game with a record-breaking World Cup innings of 237 as New Zealand beat the Windies by 143 runs.

Guptill&39;s innings, compiled from 163 balls and including 11 sixes and 24 fours, was the highest by an individual in a World Cup match, beating Chris Gayle&39;s 215 against Zimbabwe on Feb. 24, and the second-highest in all one-day internationals after Rohit Sharma&39;s 264 for India in November last year.

It was the first double century by a New Zealander in ODIs, beating the record high score of 189 he set himself, and made Guptill the first New Zealander to score centuries in consecutive World Cup innings after having made 105 against Bangladesh.

He is the fifth batsman after Sharma, Sachin Tendulkar, Virender Sehwag and Gayle to top 200 in a one-day match - all five of those scores achieved in the last five years.

New Zealand will play South Africa in Auckland on Tuesday in a semifinal which will bring together some of world cricket&39;s most prodigious hitters - the Proteas&39; AB de Villiers who owns the fastest one-day international century and New Zealand&39;s Corey Anderson, from whom de Villiers took that record. There will also

Brendon McCullum, Kane Williamson and Guptill, Quinton de Kock and Hashim Amla, all set to meet at Eden Park - a ground with the shortest boundaries in world cricket.

The Black Caps lost captain and chief run-maker McCullum for 12, with West Indies captain Jason Holder taking a well-judged running catch after a mistimed drive off the bowling of Jerome Taylor. That setback produced groans in the capacity crowd, but Guptill more than picked up the slack.

The West Indies received a boost ahead of the match when star batsman Gayle was ruled fit to play after struggling with a back injury. He moved freely and took a catch at cover to remove Williamson from Andre Russell&39;s bowling in the 16th over and another to dismiss Corey Anderson, also off Russell, in the 44th.

When Williamson went, New Zealand was 89-2 and with its two best-performed batsmen back in the pavilion, but Guptill and Taylor soon established full control for the Black Caps.

Aside from Samuel&39;s dropped chance, the West Indies had another opportunity to dismiss Guptill when he was on 86. He skied a drive off Samuels towards Jerome Taylor at long on but the fielder was slow coming off the boundary and the ball fell at his feet.

He blasted his way to 237, peppering the boundary at all parts of the Wellington Regional Stadium.

It was a dismal day for West Indies bowlers, with the opening bowlers Taylor conceding 71 runs from seven overs and Holder 76 from eight, while Russell gave up 96 runs from his full quota of 10.

The West Indies faced an imposing task of even getting close to New Zealand&39;s score, and though the scored moved along at better than eight runs per over, the wickets fell at regular intervals and the innings ended on 250 in the 31st over.

Trent Boult then took the wind out of the West Indies top order, dismissing Charles, Simmons, Ramdin and Samuels, and leaving the Windies floundering on 80-4. Boult ended with figures of 4-44 in his 10 overs.

Although the Windies were always ahead of the run rate, their constant loss of wickets undermined any likelihood of success in the run chase.

When Chris Gayle fell for a rapid-fire 63 with the score on 120, bowled by Adam Milne, the writing was on the wall.

The Windies continued scoring at the required pace, but ran out of wickets with barely 30 overs completed and just 250 runs on the scorecard.

Trent Boult took 4-44 to regain his place as the tournament&39;s leading wicket-taker with 19 while Guptill took two catches.