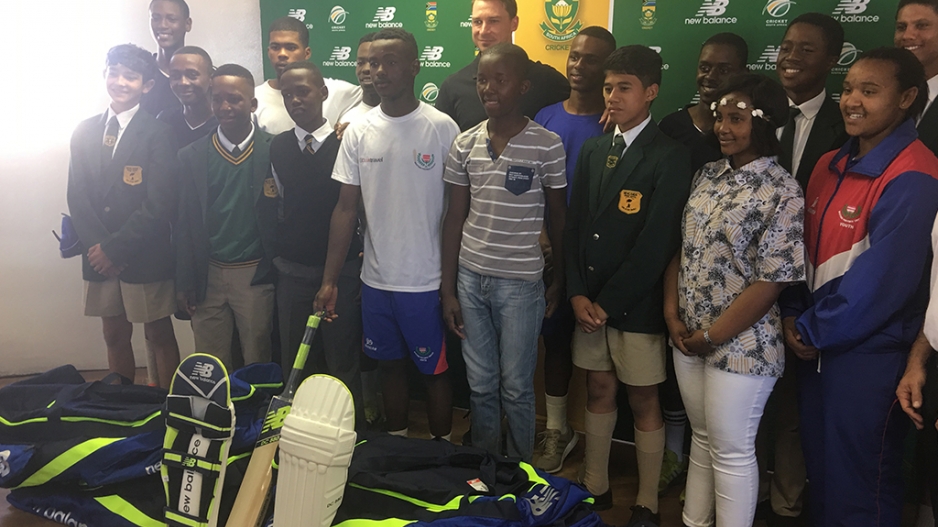 These were developed to provide opportunities for disadvantaged communities.

CSA technical partner New Balance have stepped in to sponsor the players with kit.

“As far as the Hubs are concerned, it’s really about access, making sure that players from disadvantaged areas where facilities are a major problem, that through the Hubs system players do have access to the game of cricket and what the Hubs system is doing is also linking up those players with the main stream High Performance pipeline if you want to call it that,” said CSA General Manager, Corrie van Zyl.

An investment of R1.4 million has been made for the development of cricket.

119 boys and girls who will represent their unions at the National Age Group Youth Week tournaments received a full set of equipment courtesy of New Balance.

“Obviously at the top performance level of the game, there’s obviously requirements in terms of representation and so on, but it all really starts at this level and New Balance wants to be part of that. So for us as a business we really align with CSA in terms of taking the game to everybody in the country,” said New Balance SA Country Manager, Craig Bowen.

Proteas speedster Dale Steyn was at the announcement where 19 Western Cape players received their bags at the Khayelitsha development hub.

“I think this equipment, doesn’t just serve them in the game, but going forward, it’s great, I don’t really know what to say about it because this is goosebumps stuff,” said Proteas Bowler, Dale Steyn.

“I think they are very glad to get the kit, but I think also it’s been something that they didn’t have for a very long time. And now I think going forward, in terms of developing their cricket, putting their cricket on the map. Remember that these boys, they’ve been identified and they are now in the Cricket South Africa pipeline and then from here it’s really going up to the Proteas,” said Khayelitsha Hubs Head Coach, Cyril Tshidi.

Hopefully Cricket SA and New Balance will see this investment bearing fruit as early as next week, when the various Youth Week tournaments from under-13 to under-19 will commence.