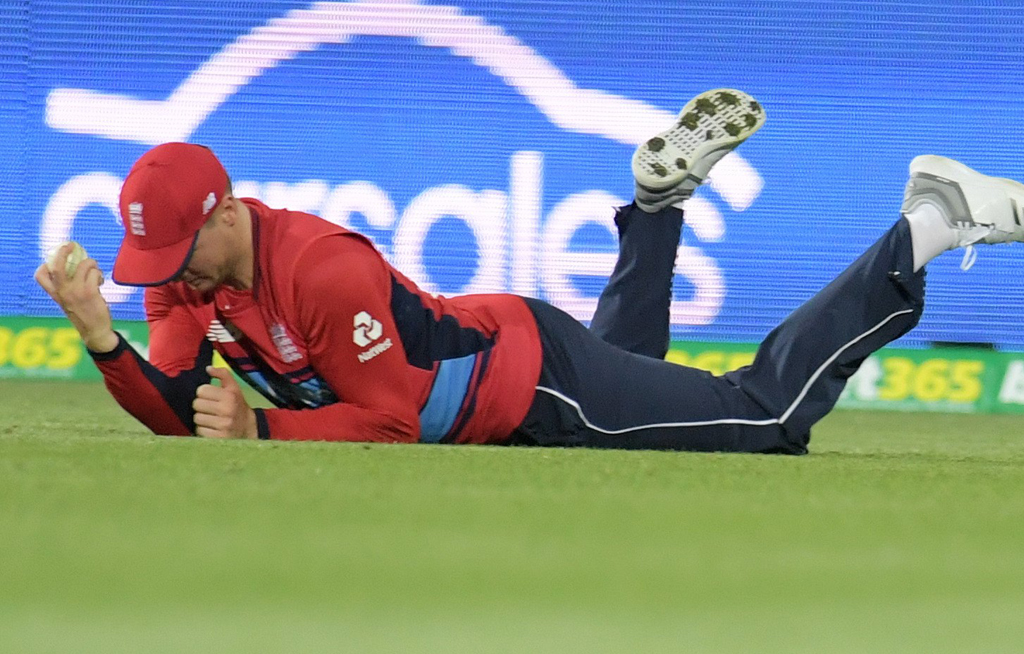 CHESTER-LE-STREET, United Kingdom - Jason Roy scored his second hundred of the series as England beat Australia by six wickets at Chester-le-Street on Thursday to move within one win of the first-ever 5-0 one-day international clean sweep of their arch-rivals.

But what was still England&39;s second highest total batting second to win a match at this level, behind their 350 for three against New Zealand at Trent Bridge three years ago, was made to look insignificant as in-form openers Roy (101) and Jonny Bairstow (79) put on 174.

WICKET! A terrific innings from Marsh comes to an end after a fantastic piece of fielding by Jason Roy. AUS 6/296 after 47.2 overs. AUSvENG 9WWOS pic.twitter.com/kjBWvMd6mZ

"I&39;m trying to control my innings, pace it so I can set some good foundations for the end," Roy told Sky Sports. "Unfortunately I couldn&39;t kick on today."

England finished on 314 for four, with Jos Buttler 54 not out, as they won with 32 balls to spare.

England, the world&39;s top-ranked side in this format, will now look to surpass their previous best ODI series result against world champions Australia -- 4-0, including a washout, in a five-match home campaign in 2012 -- at Old Trafford on Sunday.

"We came here with an inexperienced side. It&39;s not an excuse but they (England) are the best side in the world and they are really hard to beat."

Roy, who ran himself out for 82 on Tuesday, was quickly into his stride with two fours off successive Billy Stanlake deliveries.

Roy, following a 120 in the first ODI at The Oval, his Surrey home ground, completed another hundred when he hoisted recalled off-spinner Nathan Lyon for a huge six that saw him to the landmark in 83 balls.

And 174 for one became 183 for two when Bairstow, trying to run Stanlake to third man, guided a catch to wicket-keeper Paine.

When it rains, it pours

But Australia&39;s series was summed up when Alex Hales, on 17, edged medium-pacer Michael Neser only for Paine to drop a regulation two-handed catch.

"I&39;m trying to enjoy it but when it rains, it pours," said Paine. "You have to catch those but it just popped out."

But their failure to press on cost Australia a truly imposing total.

Their score was still a Riverside ODI record, surpassing England&39;s 307 for five against New Zealand in 2008.

Fast bowler Mark Wood took two wickets in an over on his Durham home ground before left-arm paceman David Willey grabbed three in five balls on his way to figures of four for 43.

Finch and Travis Head (63) got Australia off to a sound start and they were 225 for one come the start of the 40th over.

Yet they were three wickets down when it ended.

Wood broke a partnership of 124 when Finch was lbw to a ball that cut back, before he bowled Marcus Stoinis in similar fashion.

A ball after Alex Carey holed out off Willey, Marsh fell when he found Roy at long-on who, before he stepped over the boundary, reverse-flicked the ball back several yards to debutant paceman Craig Overton, who completed an extraordinary catch.

"I was lucky to have someone to throw that catch to, so well done to the big lad Craig Overton for getting the yards in to get there," said Roy.

Paine survived the hat-trick, but two balls later Neser was caught behind off Willey.