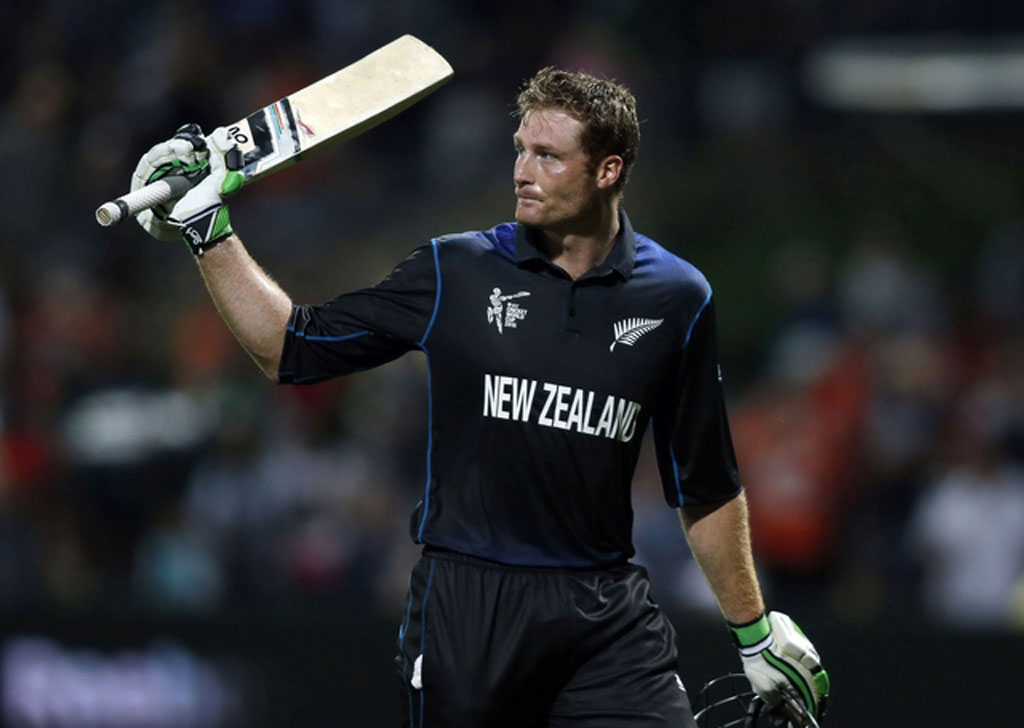 HAMILTON - Opener Martin Guptill hit a fighting century to guide New Zealand to their sixth consecutive victory in the World Cup with a three-wicket win over an inspired Bangladesh in Hamilton on Friday.
Guptill scored 105 for his sixth one-day hundred to help the co-hosts chase down a daunting 289-run target with seven balls to spare on a batting-friendly pitch at Seddon Park in a match in which the Black Caps were tested for the first time in the tournament.
Guptill&39;s knock overshadowed Mohammad Mahmudullah&39;s second consecutive hundred, his 128 not out propelling Bangladesh to 288-7 in their 50 overs.
New Zealand had already made sure of top spot in Pool A and they will face the fourth-placed finishers from Pool B -- where Pakistan, Ireland and West Indies are still alive -- in the fourth quarter-final in Wellington on March 21.
Bangladesh, who finished the group stage with seven points from six matches, will face defending champions India in the second quarter-final in Melbourne on March 19.
Bangladesh caught New Zealand napping at 33-2 by taking the key wickets of Brendon McCullum (eight) and Kane Williamson (one) by opening with spin from both ends -- only the second time in World Cup history when slow bowlers opened the attack.
New Zealand did the same against South Africa in the 2011 quarter-final in Dhaka.
Left-arm spinner Shakib Al Hasan took both the early wickets before Guptill and Ross Taylor (56) revived the innings through their 131-run stand for the third wicket.
Guptill took a single off paceman Taskin Ahmed to reach his hundred off 88 balls before holing out to Hasan after suffering leg cramps. He hit 11 boundaries and two sixes during his 100-ball knock.
Taylor, who hit five fours, added another 46 with Grant Elliott (39) before Bangladesh took three wickets in the space of 37 runs to get a sniff of an upset victory.
Corey Anderson, who hit three fours and as many sixes, fell for 39 before Tim Southee hit a six and a four to seal New Zealand&39;s first win after seven successive defeats against Bangladesh between 2010-2013 -- all away from home.
Hasan finished with 4-55.
Earlier, Mahmudullah rescued Bangladesh from a struggling 27-2 after they were put into bat.
Mahmudullah, dropped on one by Anderson off Southee, anchored the innings and added an invaluable 90 for the third wicket with Soumya Sarkar (51) and another 78 for the sixth with Sabbir Rahman who made a fiery 23-ball 40.
Mahmudullah steered paceman Mitchell McClenaghan towards third man for a couple to complete his hundred off 111 balls before blowing a kiss to the applauding Bangladeshi fans.
He became only the second Bangladeshi batsman to score back-to-back hundreds in all one-day internationals after Shahriar Nafees who achieved the feat against Zimbabwe at home in 2006.
In all Mahmudullah hit 12 fours and three sixes as New Zealand&39;s bowlers were tested for the first time in the tournament with Southee going wicketless.
Rahman raised the tempo by hitting two sixes and five fours to help Bangladesh add 104 runs in the last ten overs.
Left-arm paceman Trent Boult had jolted Bangladesh by dismissing Imrul Kayes (two) and Tamim Iqbal (13) in his first spell to finish with 2-56.
Anderson removed senior Bangladeshi batsmen Shakib A Hasan for 23 and Mushfiqur Rahim for 15 to finish with 2-43.
Bangladesh were without their regular skipper Mashrafe Mortaza after he was ruled out due to a soar throat and a calf injury while New Zealand had to leave out unfit Adam Milne and brought in McClenaghan for their first change in the tournament.