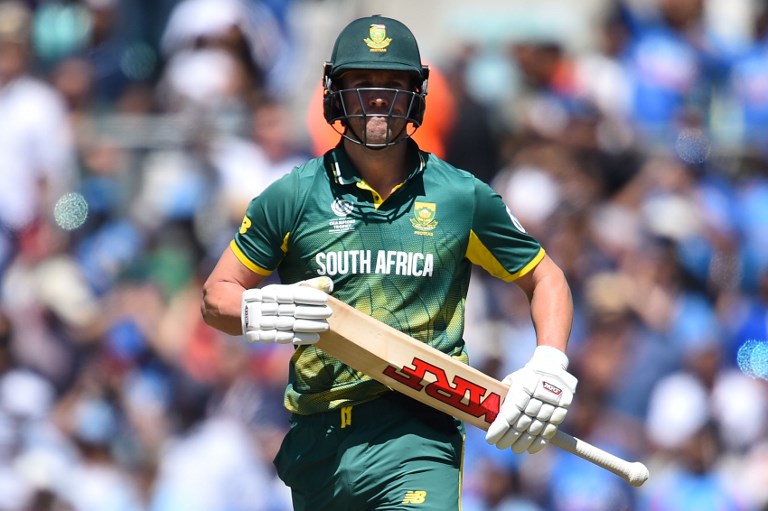 South Africa's AB de Villiers leaves the field after being run out for 16 during the ICC Champions Trophy match between South Africa and India at The Oval in London on June 11, 2017.

MUMBAI - AB De Villiers has made no bones about his desire to win a World Cup with South Africa.

Such was his drive to get the coveted prize that he chose to skip most Tests in 2017 to focus solely on white-ball cricket in the lead up to the ICC Cricket World Cup 2019.

De Villers, 34, returned to play all three formats of the game in 2018 and had a successful Test series against Australia at home, where he scored four fifties and a century in South Africa&39;s 3-1 victory.

It now seems the World Cup has moved down on his bucket list.

At an IPL media conference on Monday, De Villiers said that winning the trophy was not his ultimate dream anymore.

"I&39;ve committed to all three formats last season and I loved every second of it. I&39;ll take it one game at a time from here on."

De Villiers has been a part of three World Cup squads – 2007, 2011 and 2015 – but the closest he came to the trophy was in 2015 when he led South Africa to the semifinals, only to go down by four wickets in a humdinger against New Zealand.

He was at the helm again during the ICC Champions Trophy in June 2017, where South Africa could not make it past the group stage.

De Villiers relinquished the captaincy in August, handing over the reins to Faf du Plessis, who has since been leading the side in all three formats.

“I have known Faf for many years. He was captain of the primary school when I played with him," said De Villiers.

"He has always been a good leader and I see a lot of good years coming from Faf. He has already done fantastic things and I am seeing more to come."

Playing under Virat Kohli in the Indian Premier League as part of the Royal Challengers Bangalore franchise, De Villiers&39;s relationship with the Indian captain has been well documented.

Both batsmen have gone on record to say how much they have benefited from each other&39;s company.

"The true judge of a good captain is when you don’t perform well and still do a good job of leading a side," said De Villiers about Kohli&39;s captaincy.

"He’s come through with flying colours when it comes to that. He’s still putting in a lot of effort and energy into the team, into preparing us and keeping energy during training sessions. That’s the characteristic of a true captain and a really good leader.”

READ: Markram: It wasn’t nice watching AB being run out

Another player that has caught De Villiers&39;s eye is Heinrich Klaasen. Picked up by Rajasthan Royals as a replacement for Steve Smith, Klassen hasn&39;t had the best of starts to his IPL career with scores of 7 and 0 in his first two outings, but De Villiers was confident the wicket-keeper batsman would come good.

"Klassen&39;s a fantastic player. I worked with him in the off-season and I actually got a few tips from him," he revealed.

"He has a lot to offer and he will have a fantastic career. It didn’t start well for him in the first two games that he played, but if he is backed, he’s definitely going to come through.”