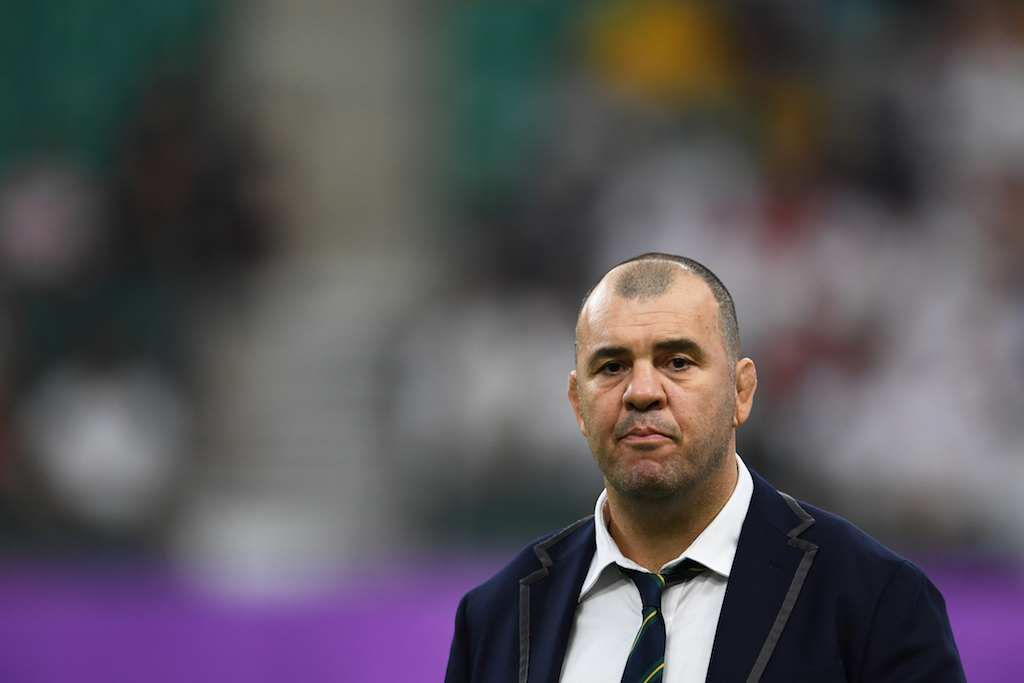 Australia's head coach Michael Cheika looks on before the Japan 2019 Rugby World Cup quarter-final match between England and Australia at the Oita Stadium in Oita on October 19, 2019.

JAPAN - Dejected Australia coach Michael Cheika urged the media to show "compassion" when asked about his future after England knocked the Wallabies out of the World Cup with a 40-16 quarter-final win on Saturday.

Cheika's contract expires at the end of the year and he has previously indicated he would not be reapplying for his job if they failed to win the World Cup, having overseen Australia's defeat in the 2015 final by New Zealand.

But asked about his position following Saturday's emphatic defeat in Oita, which equalled England's record 24-point margin of victory over Australia, Cheika said: "I will be honest, it is a cruel, cruel world nowadays when you are asking that question two minutes after we've been knocked out of the World Cup.

"And if you find it inside you, to find a little bit of compassion for people who are hurting, to just ask the more relevant questions, because I will tell you, I came here with only one thought in my mind about winning here and that thought has just disappeared now.

"I know that is what the papers demand but perhaps whatever your news outlet is should think about people's feelings just for a minute."

Told his position was of great interest to the Australian public, Cheika replied: "When the time comes, I'll tell them. They don't need to know today."

This result meant the Wallaby boss has presided over seven straight losses to England since his former team-mate at Sydney club Randwick, Eddie Jones, took charge of the Red Rose brigade after the 2015 World Cup.

"Exit is an exit, it doesn't matter if it's a final or quarter-final," said Cheika.

"The opponent is irrelevant. For all the carry-on (exchanges between Cheika and Jones), we are just going out to compete... it's painful either way."

England outscored Australia four tries to one, with wing Jonny May marking his 50th cap with a first-half double in three minutes.

Prop Kyle Sinckler crossed for the first time in Test rugby before Anthony Watson went over four minutes from the finish.

England captain Owen Farrell was faultless from the kicking tee, landing eight out of eight shots for a match haul of 20 points.

Yet Australia, thanks to a converted try from wing Marika Koroibete were only a point behind at 17-16 early in the second half.

The Wallabies gave away two intercept tries but Cheika insisted that playing a tighter game was not in Australia's nature.

"I'm not going to go to a kick-and-defend game," he said. "Call me naive but that's not what I am doing.

"I would rather win playing our way, that's the way Aussies want us to play."

Meanwhile Jones, Australia's coach when they lost the 2003 World Cup final to England, was asked if he felt any sympathy for Cheika.

"It's tough when you lose a game, particularly at this level," he said.

"But not a lot of sympathy now because I'm enjoying the win and I think I'm allowed to enjoy the win."