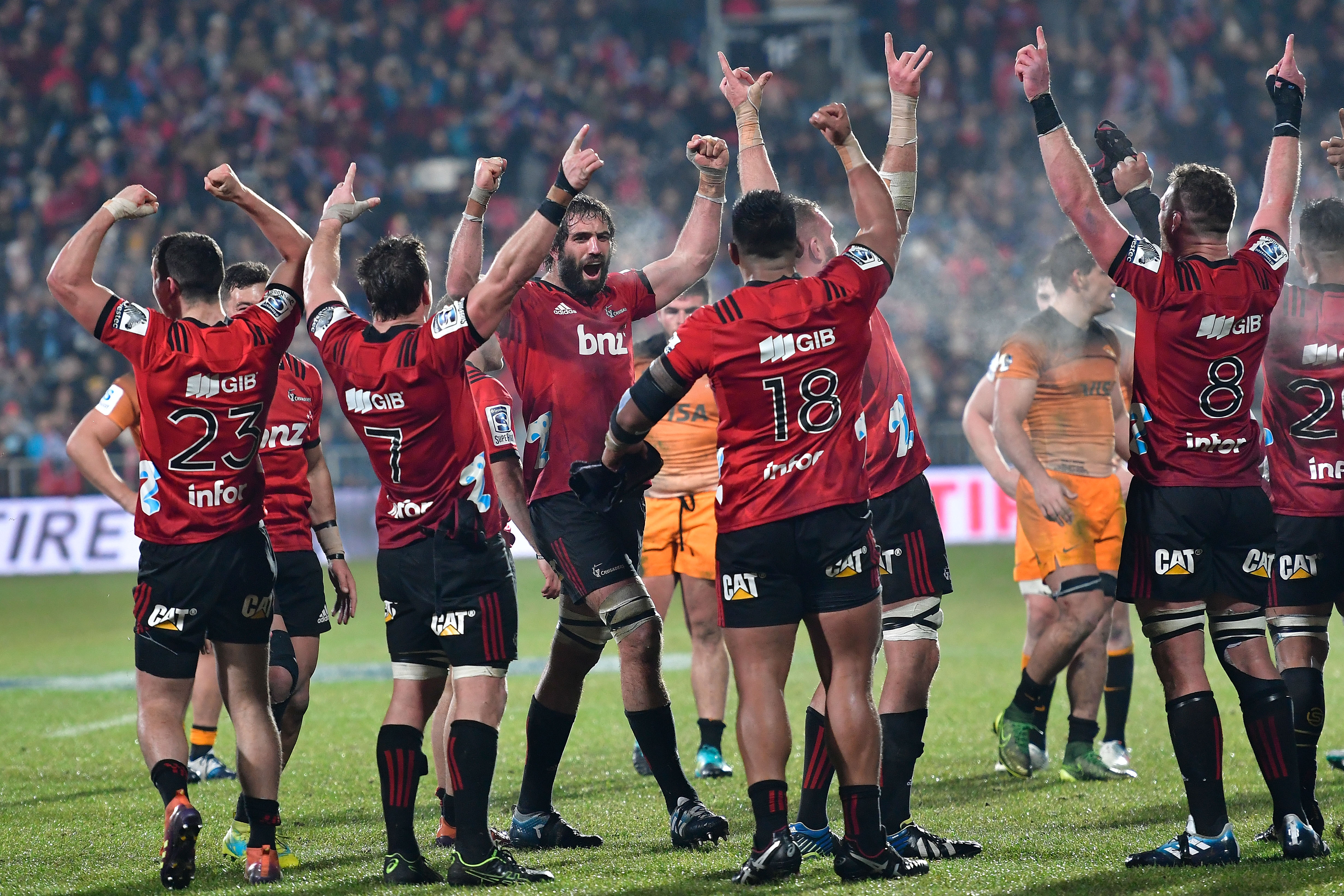 Crusaders players celebrate their win in the Super Rugby final match between New Zealand's Crusaders and Argentina's Jaguares in Christchurch on 6 July 2019.

WELLINGTON - The Canterbury Crusaders soaked up the pressure from an enterprising Jaguares side to clinch their 10th Super Rugby title with a tight 19-3 victory in chilly conditions at Rugby League Park in Christchurch on Saturday.

It was also their third successive title under Scott Robertson, who became the first coach to guide a Super Rugby team to three consecutive championships.

Hooker Codie Taylor scored the only try for the home side, while flyhalf Richie Mo'unga added 14 points with the boot.

Joaquin Diaz Bonilla slotted a penalty for the Jaguares, who were playing their first Super Rugby final following a remarkable rise after only joining the southern hemisphere competition in 2016.

The Jaguares entered the final having won 11 of their last 12 games and held no fears of facing the Crusaders at their home venue, where the New Zealand side were on an unbeaten 30-match streak over the last three years.

After defending for much of the initial period, flyhalf Diaz Bonilla opened the scoring in the 16th minute with a 35-metre penalty when Crusaders scrumhalf Bryn Hall was caught offside at a defensive scrum.

Diaz Bonilla, however, gifted the Crusaders their only try to Taylor in the 25th minute when he had the ball stripped by flanker Matt Todd inside his own half.

The tactical battle continued in the middle of the field and only a superb tryline tackle by fullback David Havili on winger Matias Moroni prevented the visitors from taking the lead into halftime.

Mo'unga instead slotted a 45-metre penalty after the hooter had sounded when hooker Agustin Creevy was penalised at the breakdown to give the home side a 10-3 lead at the break.

The Jaguares threw everything at the Crusaders in the opening minutes of the second half, but the home side withstood the onslaught and then began to mount pressure on the visitors.

Referee Jaco Peyper awarded them a succession of penalties for their dominance with Mo'unga slotting two by the 60th-minute mark to give the home side a 16-3 advantage entering the final quarter.

The experienced All Blacks in the Crusaders pack in captain Sam Whitelock, Kieran Read and Luke Romano then took control of the match and Mo'unga's fourth penalty in the 75th minute from long range was enough to keep the title in Christchurch.