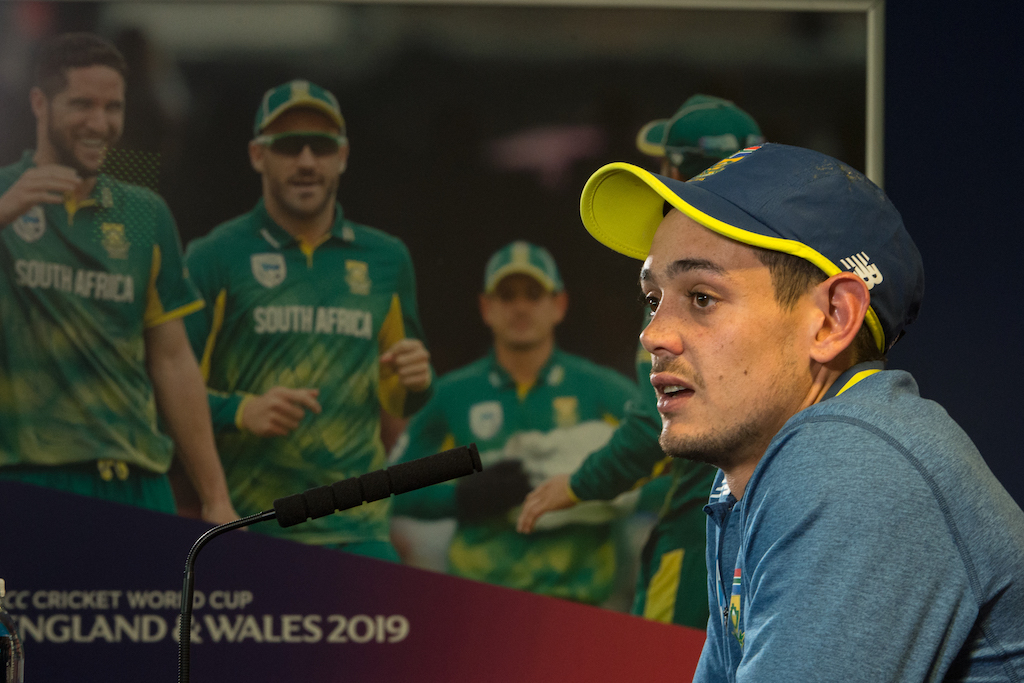 Quinton de Kock takes part in a press conference on the eve of the 2019 ICC Cricket World Cup match between New Zealand and South Africa.

BIRMINGHAM - Quinton de Kock has told his South Africa teammates to keep their heads when they face New Zealand in a must-win World Cup match on Wednesday.

South Africa's hopes of making the semi-finals would effectively be over if they lose at Edgbaston after a wretched start to the tournament.

A nine-wicket victory over Afghanistan on Saturday was their first win in this World Cup in England and Wales.

The Proteas cannot afford any more slip-ups in their remaining games against New Zealand, Pakistan, Sri Lanka and Australia if they are to maintain slender hopes of a semi-final berth.

De Kock admits South Africa's chances of avoiding an embarrassingly early elimination will be wrecked if they do not cope with the stress of playing in a do-or-die situation.

"Obviously it's a big game for us but, in saying that, our next three or four games that we have, they are all going to be big games for us for the rest of the tournament," he said.

"We're just going to have to go out there, keep our heads steady and play freely.

"Tomorrow is a quarter-final, I guess you could say it, but if we do win it, then it's another big game again.

"We have to win all the games, not just focus on tomorrow. But in saying that, we know how good New Zealand are playing at the moment. They are a big team in World Cups. They always seem to step up."

Unbeaten New Zealand are favourites to push South Africa towards the World Cup exit door and De Kock admits morale among Faf Du Plessis's squad has not been as high as he would like.

But he hopes the comprehensive victory against minnows Afghanistan will provide a much-needed spark in the nick of time.

"I think before our first game that we played against England, we were in a pretty good space also then, mentally and with our preparation," he said.

"Then obviously, during the course of the tournament, obviously after losing all the time, there's always a bit of a slump in being mentally strong.

"Getting a win again has given us high hopes. It just becomes a mental game at a World Cup, trying to deal with all the pressures and stuff.

"We've put a lot of emphasis on our energy going into the games, and the situation we're in right now, our energy needs to be better than ever."