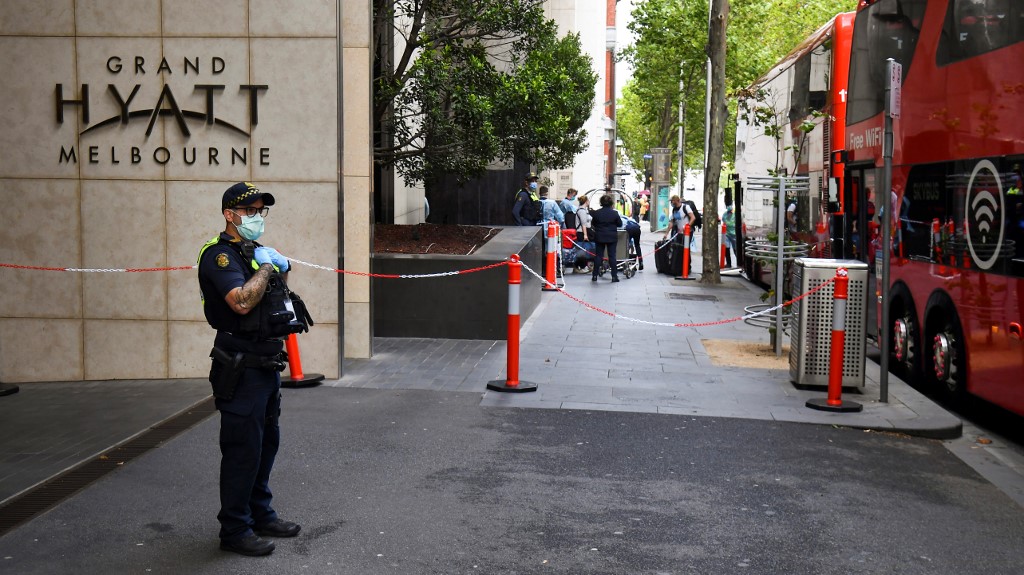 A policeman keeps watch as tennis players, coaches and officials arrive at a hotel in Melbourne on January 15, 2021, before quarantining for two weeks ahead of the Australian Open tennis tournament.

AUCKLAND - Forty-seven players were barred from practising for a fortnight Saturday in a major setback to their Australian Open preparations after passengers on two charter flights that brought them to Melbourne tested positive to COVID-19.

While the three people who failed the tests were not players, everyone on board was considered a close contact and ordered to stay in their hotel rooms for the entire 14-day mandatory quarantine period.

It means none of them will now be allowed out to practise and train for the five hours each day agreed to as part of their build-up to the opening major of the year, Tennis Australia said.

That included 24 players on a plane from Los Angeles, where a crew member and one other passenger, reportedly a coach, tested positive.

According to local media, former Australian Open champion Victoria Azarenka, 2017 US Open winner Sloane Stephens and Japan's Kei Nishikori were among those on board.

A positive case -- not a player -- also emerged from a flight from Abu Dhabi, with 23 players affected, reportedly including Grand Slam winners Bianca Andreescu, Angelique Kerber, and Svetlana Kuznetsova.

READ: Aussie Open aspiring for up to half-full stadiums

"We are communicating with everyone on this flight, and particularly the playing group whose conditions have now changed, to ensure their needs are being catered to as much as possible, and that they are fully appraised of the situation," tournament organiser Craig Tiley said of the Los Angeles service.

French player Alize Cornet, who is in Melbourne but was not on either plane, called the situation "insane".

"Soon, half of the players from the AO will actually have to isolate," she tweeted.

"Weeks and weeks of practice and hard work going to waste for one person positive to Covid in a 3/4 empty plane. Sorry but this is insane."

The world's top players began arriving in Australia on Thursday for the delayed Grand Slam, which is due to start on February 8.

Most touched down in Melbourne, although the biggest names in the game, including Novak Djokovic, Rafael Nadal and Serena Williams, flew into Adelaide.

All must undergo a 14-day quarantine, but are allowed out for five hours daily to train in strict bio-secure bubbles ahead of a host of warm-up tournaments, all in Melbourne, in the week leading up the Grand Slam.

According to the Melbourne Herald Sun, the Los Angeles flight was the same one that sparked controversy on Thursday when American player Tennys Sandgren tweeted he had been allowed to board despite returning a positive test.

It was his second positive result, having been diagnosed with Covid-19 in November, but Victorian state health chiefs insisted his infection was historical and he had "met the rigorous health criteria that has been set".

Players were only allowed to board with proof of a negative test prior to departure, or with approval as a recovered case at the discretion of the Australian government, as with Sandgren.

It was the latest setback for a tournament that has spent months working through the logistical nightmares of hosting a Grand Slam during a pandemic, with Melbourne only emerging from months of lockdown in October.

The tournament has already lost some key players, with Roger Federer out injured and world number 25 John Isner opting not to travel due to the coronavirus restrictions.

Three-time major winner Andy Murray tested positive for the virus and is isolating at home in London, casting major doubt over whether he will be able to play.

Meanwhile, world number three Dominic Thiem arrived without coach Nicolas Massu, another to test positive, and Nadal is missing his coach Carlos Moya who has decided not to make the trip.