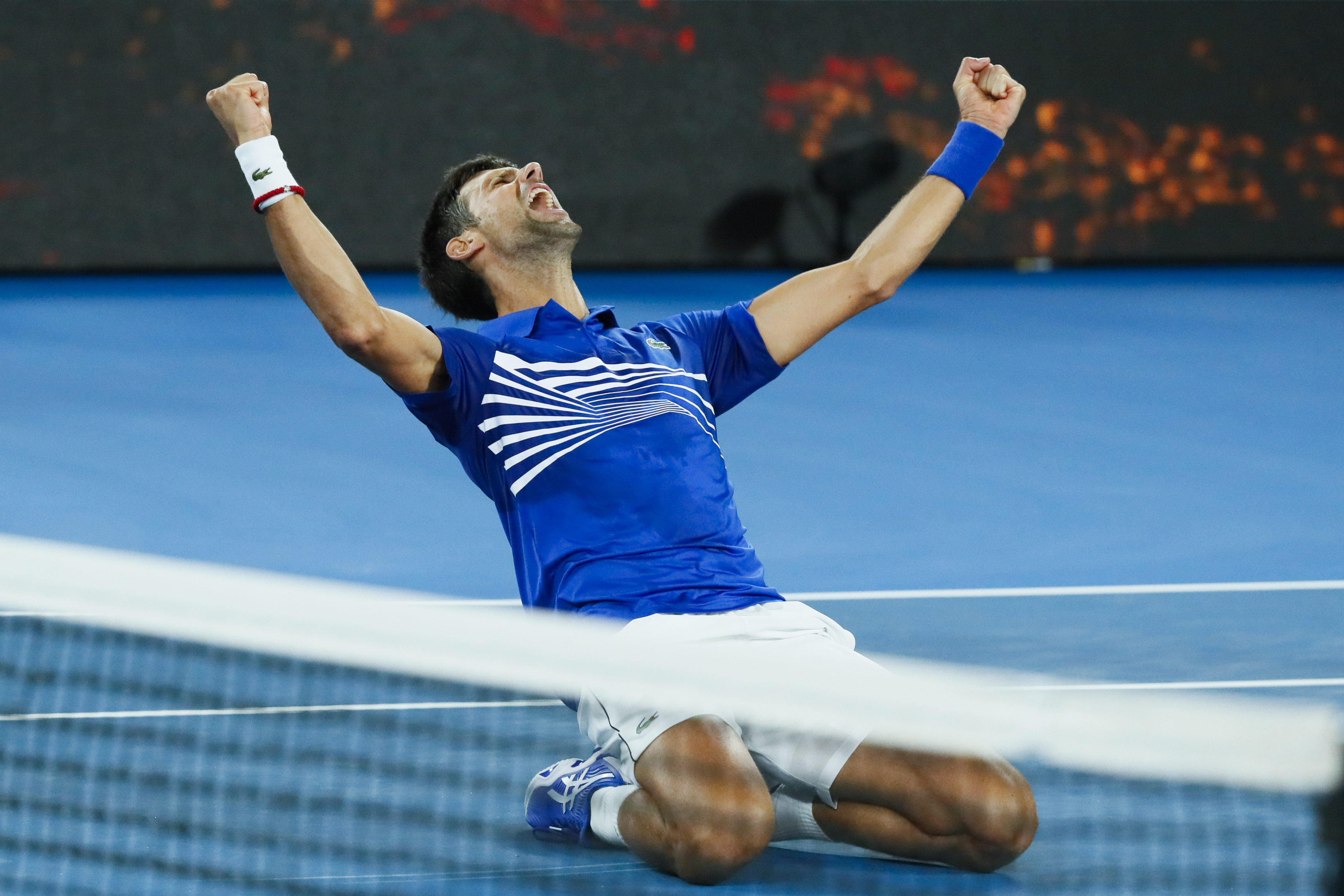 Serbia's Novak Djokovic celebrates his victory against Spain's Rafael Nadal during the men's singles final on day 14 of the Australian Open tennis tournament in Melbourne on January 27, 2019.

It put Djokovic, 31, out on his own ahead of Roger Federer and Roy Emerson, who both won six Australian Open men's singles titles.

Djokovic dropped to the court and kissed the ground after vanquishing his greatest rival.

No two men have met more often in the Open Era, this was their 53rd meeting, and no pair have pushed one another harder or further.

Their only previous final in Australia, in 2012, developed into a record-breaking 5hr 53min slugfest -- the longest in Grand Slam history.

A repeat of that epic never materialised with Nadal uncharacteristically nervous at the start and Djokovic taking immediate advantage.

The Spaniard had not had his service broken since the third set of his first round match but that streak ended in a flash as the Serb came sprinting out of the blocks.

Djokovic was in imperious control on his own delivery and won his first four service games without conceding a single point, even inducing Nadal to miss a forehand completely on the way to grabbing the set in 36 minutes.

The second set followed a similar pattern, with Djokovic racing through games on his own serve, while Nadal struggled to hold.

The pressure told in the fifth game and Djokovic broke again when Nadal hit a lob volley long after an exchange at the net.

Djokovic had only conceded two points on serve in the entire match to this point but Nadal had his first sniff at breaking when he got to 30-15 ahead and deuce, twice.

Djokovic had to withstand pressure for the first time in the match, overcoming the threat with a roar and a fist pump to go 4-2 ahead.

The on-song Serb was so fired up he came straight out and broke Nadal again to go to 5-2 before serving out for a two-set lead with three aces in a row with just 1hr 16min on the clock.

The statistics were as telling as the scoreline: Djokovic had served eight aces to Nadal's one and made just four unforced errors while the Spaniard had coughed up 20.

When Djokovic broke again in the third game of the third set it was just a matter of how quickly he would finish off Nadal.

The end was swift, as Djokovic withstood one break point at 3-2 before administering the last rites in a flurry of winners off both wings.

Victory extended his win-loss record against Nadal to 28-25 and squared the Grand Slam final count between the pair at 4-4.

Djokovic has now completed a hat-trick of Slams following his wins at Wimbledon and the US Open.

He will go to Paris in May for the French Open seeking to become the only man in the Open Era to win all four majors twice.