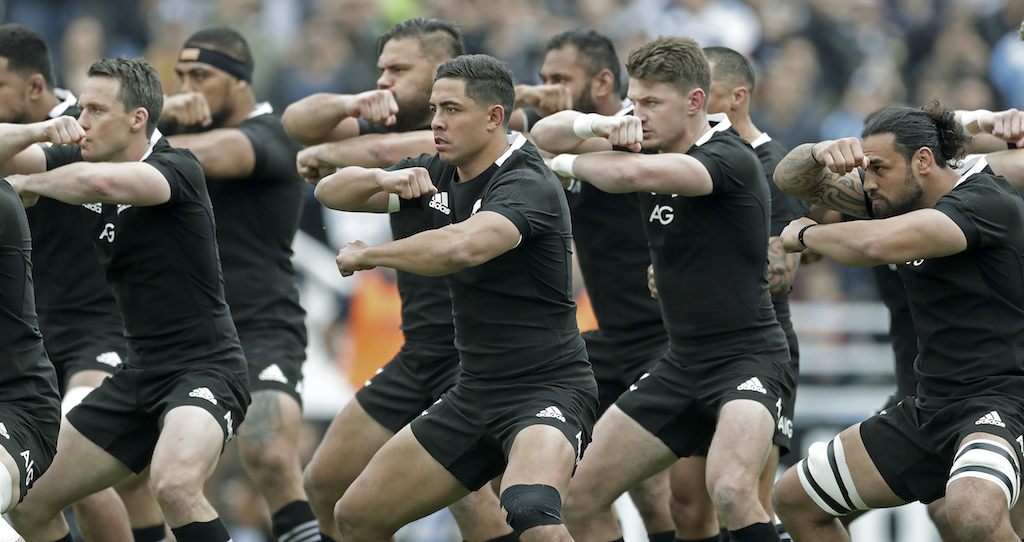 File: New Zealand perform the Haka ahead of a 2019 Rugby World Cup match.

TOKYO - When England and New Zealand last met in a Rugby World Cup semi-final, it took just one barnstorming run to confirm Jonah Lomu's status as a star of the game.

The 1995 edition in South Africa saw All Blacks wing Lomu burst onto the global stage with a series of tries that included four in a 45-29 semi-final win over England in Cape Town.

As the teams prepare for just their second World Cup semi-final clash in Yokohama on Saturday, memories of Lomu, who died aged 40 from kidney disease in 2015, have been brought back into focus with Samoa-born England centre Manu Tuilagi acknowledging the impact of his childhood hero.

"You'd always watch the All Blacks back in Samoa," said Tuilagi, who while no slouch himself when it comes to making his presence felt, was happy to accept that Lomu was in a different class.

"Big Jonah - I was a massive fan. Just the way he played. No one plays like him. Big legend of the game. I tried to be like him. You try, but you don't succeed."

The first of Lomu's four tries at Newlands 24 years ago proved Tuilagi's point.

Just minutes into the match, the giant Lomu gathered a loose pass, fended off opposing wing Tony Underwood, stayed upright despite a desperate ankle tap from England captain Will Carling and then ran straight over the top of helplessly exposed fullback Mike Catt.

READ: England 'not our fiercest rivals': All Blacks coach Hansen

Traditionally, wings such as Wales's Gerald Davies or New Zealand's Bryan Williams were diminutive figures who relied on speed and a sidestep to evade their opponents.

The idea of simply running through them as demonstrated by Lomu - who weighed 18 stone (114 kgs), stood 6ft 5in (1.96 metres) tall and had plenty of pace - was something else.

A dazed Carling summed it up after the match when he said with a wry smile: "He is a freak and the sooner he goes away the better."

'Couldn't get hold of him'

"I've got to thank Jonah for putting me on the map," Catt told BBC radio following Lomu's death.

"I still blame Will Carling for the incident. He ankle-tapped him. Jonah is then stumbling towards me, rather than standing upright, and like you do in your Under-10 days you get your feet close and you drive your attacker.

"Unfortunately, the next thing I remember is turning around to see Jonah scoring the try. He's 18 stone, I was 13 stone. The rest is history.

"I laughed at myself, I thought it was brilliant," insisted Catt.

"He scored every time he got the ball, you couldn't get hold of him."

Utility back Catt was capped 75 times by England and helped them win the 2003 World Cup, coming off the bench during a 20-17 win over Australia in the final.

This year's World Cup has seen Catt involved as a member of Italy's coaching staff but their pool game against New Zealand was cancelled because of Typhoon Hagibis.

Yet Catt long ago accepted that when many people recall his rugby career, the first thing that springs to mind is the sight of him being trampled underfoot by Lomu.

"It's one of those things that'll continuously be shown," he said.

Unlike Catt, however, Lomu never did win the World Cup.

Four years later, Lomu scored two early tries in a Twickenham semi-final as the All Blacks surged into a 14-point lead only for France to stage an astonishing recovery that saw them to a 43-31 win.

"He's what rugby union is all about," said Catt of Lomu.

"He was a proud and respectful person and was selfless in everything he did. It's sad he didn't win the World Cup. If there's one person who deserved the medal, it's Jonah."