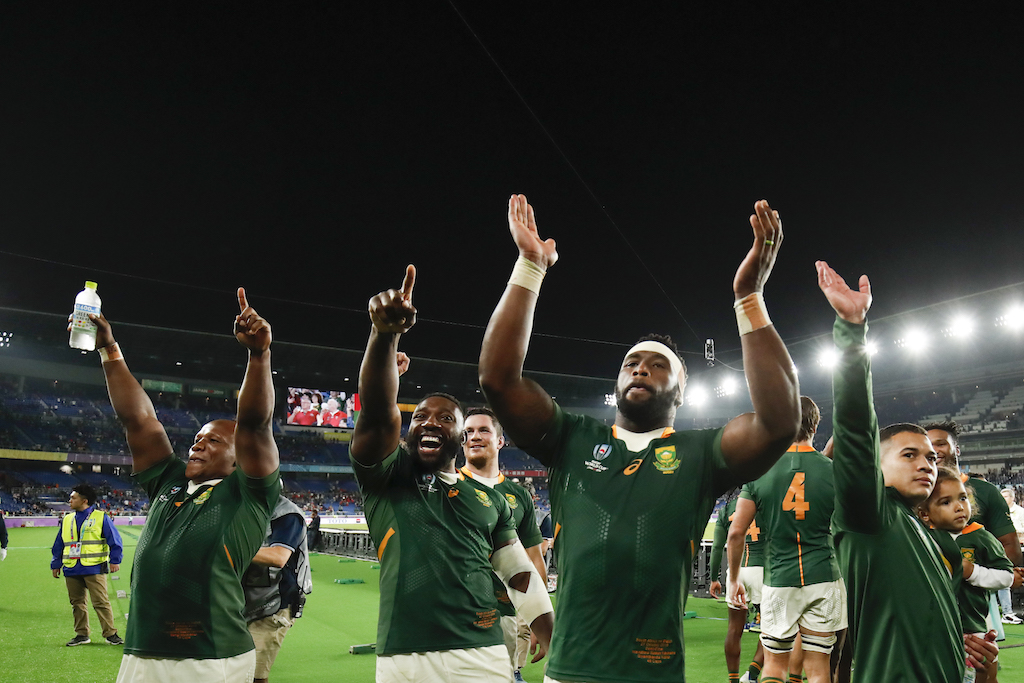 FILE: The Springboks will face off with England in the Rugby World Cup final in Japan on Saturday.

TOKYO - When England and South Africa face off in the Rugby World Cup final in Yokohama on Saturday, it will be the latest chapter in a history of classic encounters on the game's biggest stage.

Look back at their four previous World Cup matches, with the Springboks ahead in the series 3-1 :

A disallowed try sparked tensions in 2007 when South Africa faced off with England in the Rugby World Cup.

The two sides have met in the final once before, in 2007, when Springbok fullback Percy Montgomery outkicked England legend Jonny Wilkinson to secure a try-less 15-6 victory in the Stade de France in Paris.

England fans still claim that wing Mark Cueto should have been awarded a try early in the second half that would have given them the lead. However, the Television Match Official ruled that Cueto's left boot had grazed the touchline and disallowed it.

The English had long periods of possession towards the end and battered the Springbok defences but South Africa held firm to claim their second Webb Ellis Cup, 12 years after their famous 1995 win in front of Nelson Mandela.

Another dozen years on, the Boks will be hoping that the 'rule of 12' also applies to 2019.

England won their pool match against South Africa in 2003.

Wilkinson gave the world a preview of what they could expect in the 2003 final with two drop goals that pulled England away from the Springboks in a 25-6 Pool C victory in Perth.

England centre Will Greenwood scored the only try of the match after flanker Lewis Moody charged down a clearance kick, controlling the ball brilliantly with his feet before diving over for the score.

The metronomic Wilkinson added four penalties to his drop goals, with only two penalties from fly-half Louis Koen in return for the Springboks.

After the pool defeat, South Africa would go on to qualify second from the pool, meaning a match-up with New Zealand in the quarter-final, which the All Blacks won 29-9.

It turned out to be England's year, their only World Cup win so far, after they beat Australia in the final with another drop goal from Wilkinson in extra time.

The Springboks silenced many of their critics when they put together a fine performance.

It was a match dominated by kicking with a dearth of free-flowing rugby but it was close at half-time, the Springboks sneaking ahead 16-12 by virtue of a controversial try by legendary scrum-half Joost van der Westhuizen, which England said was in touch.

But then de Beer embarked on his astonishing run of drop goals, seemingly trying for the posts whenever South Africa were in England's half and with staggering accuracy.

He finished with a perfect goalkicking record of two conversions, five penalties and five drop goals -- a total of 34 points -- and even contributed to South Africa's second try as Pieter Rossouw latched on to his towering up-and-under.

Key players in the 2007 Rugby World Cup, including Bryan Habana and John Smit, speak on their experience.

Before the final in 2007, the two teams met in a pool match, with the Springboks running out massive 36-0 winners -- a dreadful start to the defending champions' campaign, and presaging South Africa's second title.

Wing JP Pietersen touched down for two tries to add to a sixth-minute score from flanker Juan Smith, all converted by Percy Montgomery.

Montgomery kicked four out of four penalties and Francois Steyn also bagged a penalty to pour further misery on England in one of their worst-ever World Cup defeats.

England bounced back to come second in the group and squeezed past Australia and France to reach the final.

Arguably South Africa's pool win gave them the edge in the final, as by winning the pool, they had a much easier route through, taking on Fiji and Argentina.