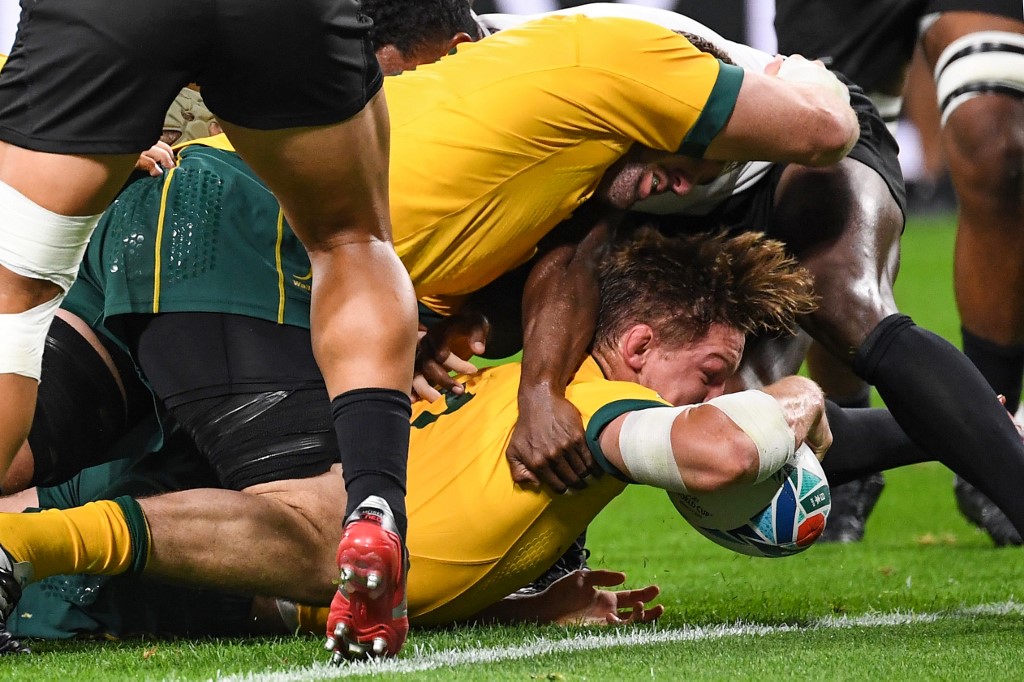 Australia's flanker Michael Hooper scores a try during the Japan 2019 Rugby World Cup Pool D match between Australia and Fiji at the Sapporo Dome in Sapporo on September 21, 2019.

Things are suddenly very real with regards to the Rugby World Cup. Teams can no longer rest on their laurels or breathe easy against minnow opposition. It’s do or die as the quarter-final stages come to life on Saturday with England versus Australia.

It will feel like ages since England last ran out with their final pool encounter against France cancelled last weekend due to the typhoon so they’ll probably be ruing the opportunity for a chance to take on some decent opposition heading into the knockouts.

Australia haven’t been overly convincing so far in this tournament and they go into this as slight under dogs, perhaps a moniker that might suit.

The history between these two teams suggests that they’ve always been fairly closely matched. They’ve met 50 times, a history that dates back to 1909, and of those England have won 24 and there’s been a solitary draw.

But it is the recent history that we are most interested in and that’s where England have a definite edge. They’ve won six encounters on the bounce against the Australians. And they haven’t just beaten them, they’ve actually managed to do it very comfortably. In their most recent meeting, at Twickenham in November last year, the English were 37-18 winners.

These two sides met in the last World Cup and it was the Australians who prevailed, 33-13, in a pool encounter. they also met in the 2007 tournament as well and on that occasion it was England who came out on top, winning by two points in a low-scoring affair.

The Half Time Result sees England offered at 5/10 and Australia at 7/4 while you can get 13/20 on England to be on top at Half Time/Full Time while Australia are 33/10.

In these crunch encounters, things like the Team to Score Last or First make for interesting prop bets. You can get 6/10 on England to score last in this match and 13/10 on Australia.

For a full range of betting options available on the quarter-final between England and Australia then click here.