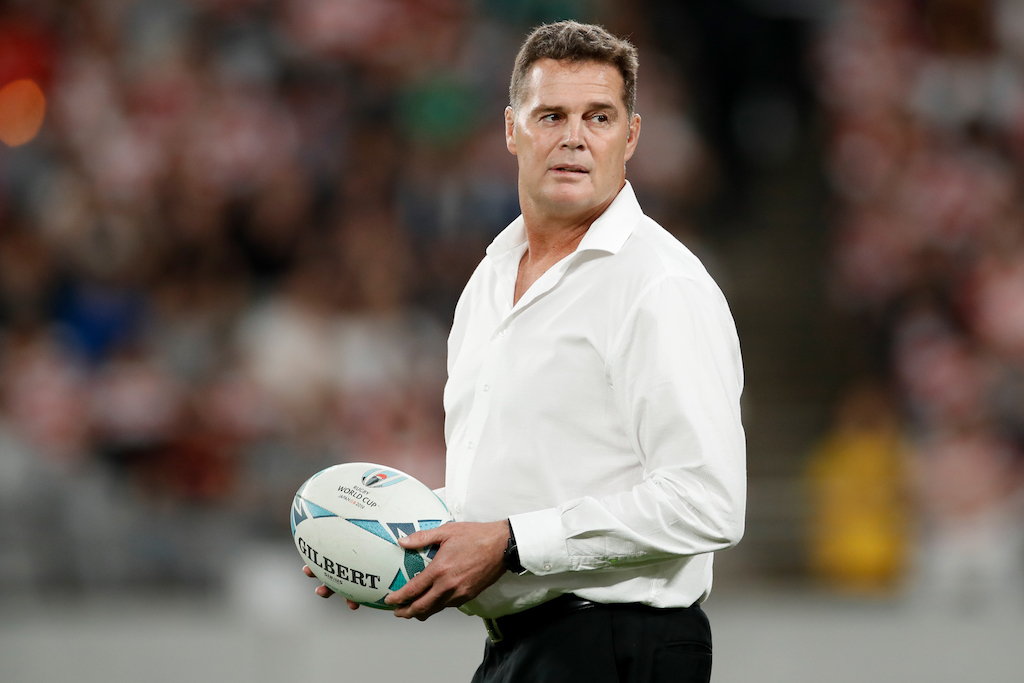 South Africa's head coach Rassie Erasmus takes part in a warm-up session before the Japan 2019 Rugby World Cup quarter-final match between Japan and South Africa at the Tokyo Stadium in Tokyo on October 20, 2019.

TOKYO - South Africa coach Rassie Erasmus admitted his team was "very nervous" leading only 5-3 at half-time against Japan in Sunday's quarter-final and urged his team to show greater concentration and consistency.

After an early Makazole Mapimpi try, the Springboks went scoreless for the rest of the first period and squandered some gilt-edged opportunities to put daylight between themselves and their underdog opponents.

"We were very nervous at half-time," said Erasmus.

"Overall, we were nervous going in to this match playing against Japan, with home support and the way they played against Ireland and Scotland.

"They were definitely building momentum," he said in reference to two wins by the Brave Blossoms that allowed them to top Pool A.

However, he revealed that there was no shouting and screaming at his players at the break to turn the situation around.

"If guys miss tackles and there's a lack of commitment and effort, then harsh words normally help," he said.

"But when it is a bad pass or a missed opportunity or a skill error, then it's more trying to get the guys' confidence up and I guess that was the challenge at half-time," added the coach.

Whatever he did obviously worked, as South Africa scored two quick penalties within 10 minutes of half-time to ease the nerves and then extended their lead with two more tries for a comfortable 26-3 win.

"It wasn't really harsh words, it was more trying to calm the guys down and trying to execute," he said.

Captain Siya Kolisi, who did most of the talking in the half-time team-talk, said the message was "be patient and trust in our plan."

South Africa will make history if they lift the Webb Ellis Cup for a third time as the only champions to have lost a match - after defeat in their opening Pool B game against defending champions New Zealand.

Erasmus noted that two All Black tries in the space of just a few minutes had been the cause of that 23-13 defeat and warned his team that they could not switch off if they hoped to run out winners.

"Be consistent. I think that's the biggest work-on for us," he said.

He said he believed he had the players in the squad to go all the way, but only if they focused for the whole match.

"I guess we don't have to improve in specific departments... it's more to concentrate for the full 80 minutes. That's where we need to improve if we want to win the World Cup," said the coach.

Erasmus paid tribute to the Japanese team and their fans, who he said should be "proud of the way you are hosting this World Cup".

"Overall, I think Japanese rugby is in a really good space," he said.