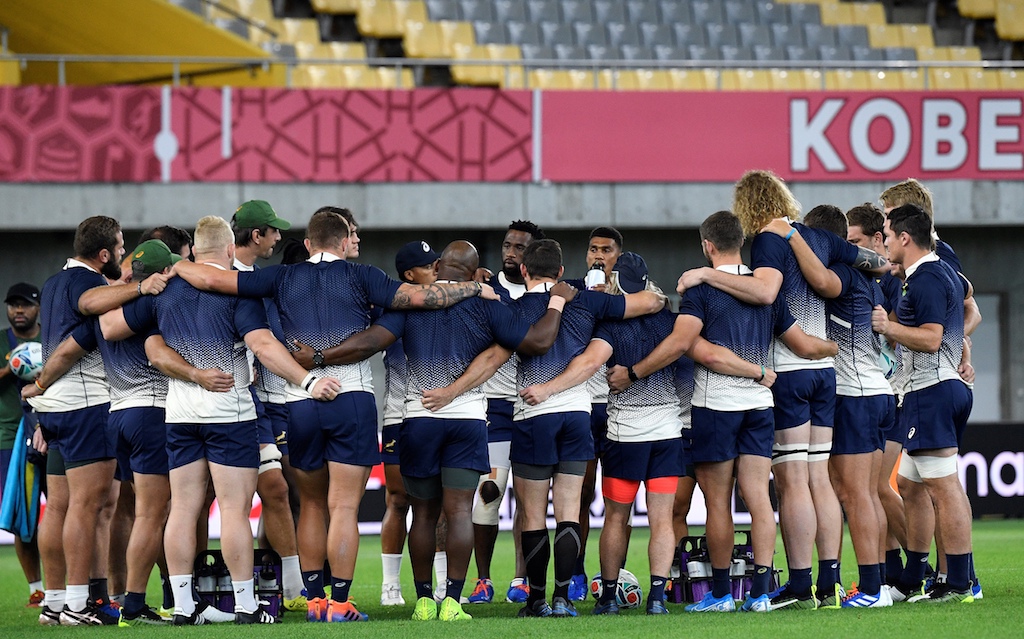 South Africa's players huddle at a captain's run training session at the Kobe Misaki Stadium in Kobe on October 7, 2019, on the eve of their Japan 2019 Rugby World Cup Pool B match against Canada.

KOBE - South Africa coach Rassie Erasmus wants no let-up from his side as they look to book their place in the Rugby World Cup quarterfinals against minnows Canada.

The two-time champions need a bonus-point win from their final Pool B match at the covered Kobe Misaki Stadium on Tuesday to be virtually assured of a place in the last eight.

That should not be a problem given Canada will be coming into this match on just a five-day turnaround after a 63-0 thrashing by New Zealand, the reigning title-holders.

Erasmus, however, has made 13 changes to the South Africa side that overwhelmed Italy 49-3 last time out, although captain Siya Kolisi has retained his place in the starting line-up as he continues his return to full match fitness following a knee injury.

"The team's make-up is a bit different but we expect the same intensity in all four of our next games (should the Springboks make the final)," said Erasmus. "One thing that will be vital going into the knockout stages is intensity and big moments.

"If these players don't step up then they will fail to stay in the team. They know that and it will be one of the challenges for them."

Turning to Kolisi, Erasmus said: "He played a full 80 minutes (against Italy) and was wonderful. I think it was his best game since he has been back from injury.

"The plan was always just to get him to the World Cup, to make sure the knee holds up.

"After that, we wanted to get him to play a full 80 minutes. He can do that now and his form is back to where it was, so to take him off the pitch would be like starting the process all over again. The more game-time he gets the better."

Damian Willemse will start at fullback for the Springboks just days after arriving as an injury replacement for Jesse Kriel.

New Zealand top Pool B with 14 points from three games, while South Africa and Italy have 10 each.

Both Canada and Namibia have yet to claim a point.

Canada have made six changes to the side overwhelmed by the All Blacks, including a brand new front row that sees props Hubert Buydens and Jake Ilnicki packing down either side of hooker Andrew Quattrin.

Kyle Baillie comes into the second row, with Andrew Coe starting at fullback and Phil Mack at scrumhalf.

And the Tier Two countries are well aware of what they are up against.

"For any Tier One nation, playing the All Blacks and the Springboks in one week is a challenge," said Canada assistant coach Huw Wiltshire.

"We are hugely respectful of the South African team. They and the All Blacks are probably the two best sides at the minute in the tournament," he added.

"Two things you can't defend against in rugby are speed and power, and both those countries have got it across their teams, across the park and across their whole squads."

The two previous meetings between Canada and South Africa include their infamous 1995 World Cup clash that became known as the 'Battle of Boet Erasmus'.

Canada's Gareth Rees and Rod Snow, as well as South Africa's James Dalton, were sent off following a mass brawl before the Springboks won 20-0 on the way to lifting the Webb Ellis Cup.