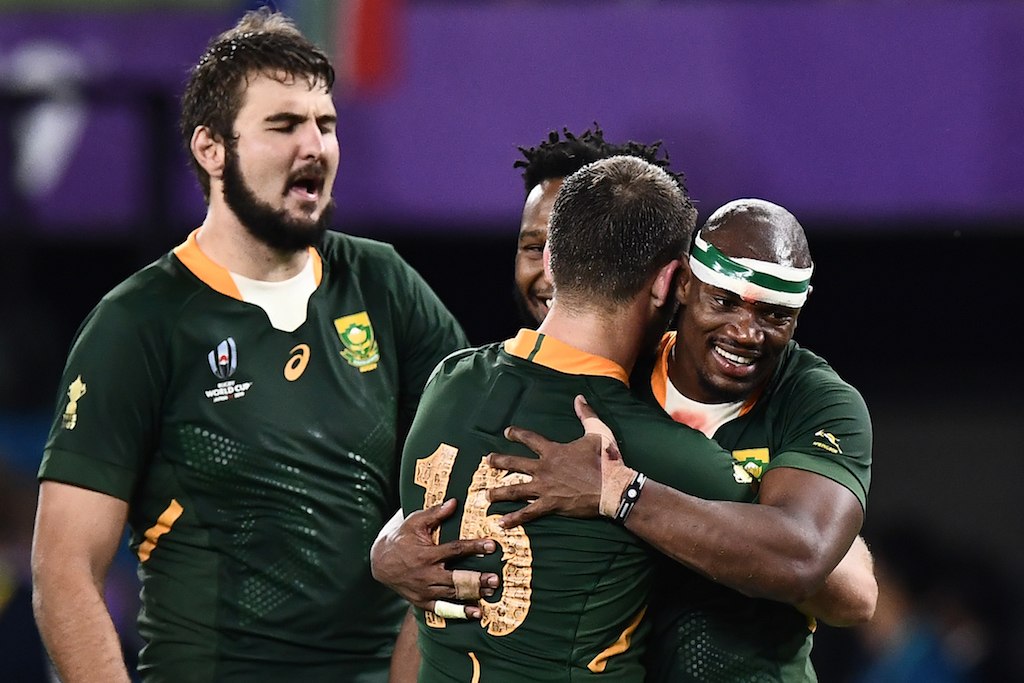 Makazole Mapimpi (R) celebrates with Willie Le Roux (2R) after winning the Japan 2019 Rugby World Cup Pool B match between South Africa and Italy at the Shizuoka Stadium Ecopa in Shizuoka on October 4, 2019.

KOBE - South Africa coach Rassie Erasmus insisted he would never tolerate racism within his squad after a clip on social media appeared to show black Springbok Makazole Mapimpi frozen out by white teammates.

Erasmus said those who rushed to condemn his side on Twitter had misunderstood a "standing joke" within the squad that saw the starting XV and matchday replacements split into different groups.

The clip was posted after the Springboks' 49-3 World Cup thrashing of Italy in Shizuoka on Friday, with Mapimpi, who started against the Azzurri, walking away from a group of white replacement players.

But Mapimpi himself insisted he was doing so because he was not a member of "the bomb squad", the name given to South Africa's matchday replacements at this tournament, with the wing saying: "There is nothing wrong. We are one."

Erasmus addressed the issue on Sunday after naming his side to play Canada in South Africa's final Pool B match, saying he was bothered by some people's "negative" interpretation of the clip.

"Everybody who has been part of a touring side or a Springbok side knows that in a squad of 31, there are guys who make the (matchday) 23 and the eight guys outside the 23 are called the 'dirt-trackers'," Erasmus explained.

"Then you get the starting XV and then you get the reserves. He said the reserves had been dubbed "the bomb squad" because they either have to fix things on the pitch or "it's a false alarm and they are not even going onto the park."

"It's a kind of standing joke in the team," said the coach.

Erasmus said it was "so sad" the clip had been misinterpreted and stressed: "I would not as a head coach allow anything like that in the team."

Rugby in South Africa has traditionally been a sport of the white Afrikaner community and making the game more representative has been a thorny issue in the post-apartheid era.

The Springboks have seen legal action launched against lock Eben Etzebeth over allegations of racial abuse and assault, which he denies.

Erasmus said he had a "really united" and "close-knit" squad, with players of "different languages and cultures."