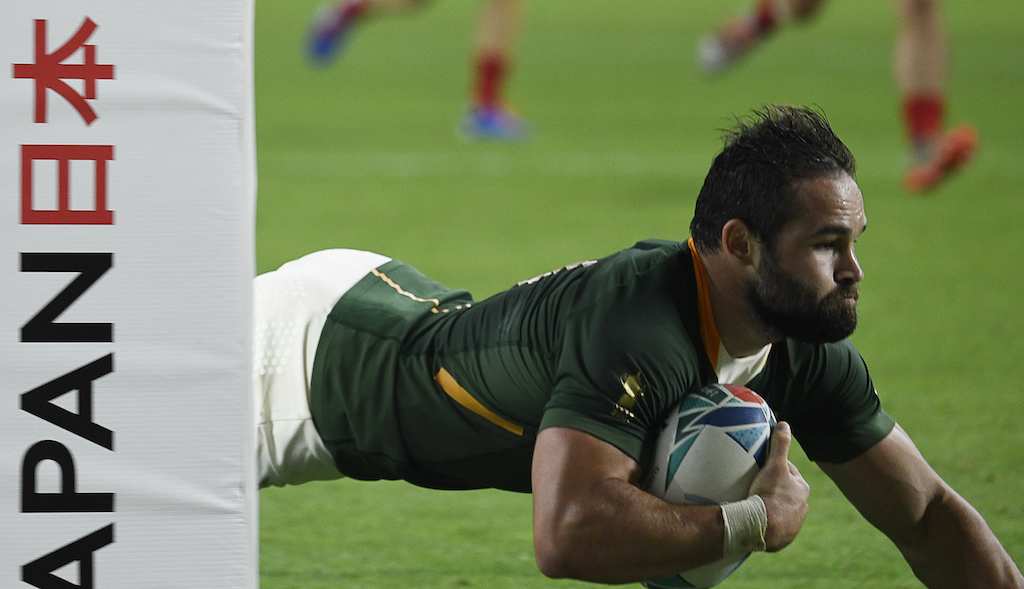 South Africa's scrum-half Cobus Reinach scores a try during the Japan 2019 Rugby World Cup Pool B match between South Africa and Canada at the Kobe Misaki Stadium in Kobe on October 8, 2019.

KOBE – South Africa coach Rassie Erasmus said the "X-factor" Cobus Reinach was a chip off an old block as the Springbok scrum-half scored the quickest World Cup hat-trick in a 66-7 rout of Canada in Kobe on Tuesday.

Reinach, son of late South Africa wing Jaco Reinach, took just 11 minutes to score three tries in a first half where the two-time world champion Springboks scored seven of their 10 in the match.

Reinach, whose treble was faster than Australia fullback Chris Latham's 25-minute hat-trick against Namibia at the 2003 World Cup, is widely regarded as the third choice scrum-half in the Springboks' squad behind Faf de Klerk and Herschel Jantjies.

His first try, in particular, was a fine example of Reinach's quality, a searing break followed by a chip over the top and regather before he sprinted clear.

"Everybody knows he has the X-factor - I knew his dad well," said Erasmus.

"He's got exceptional speed, he hasn't had a lot of game time with us since I've been coach, but he's got good speed and anticipation.

"We're lucky to have three quality nines at a World Cup."

While the Springboks have all but booked their place in the last eight, the identity of their quarterfinal opponents from a tightly-contested Pool A remains far from clear.

South Africa could find themselves up against one of Japan, Ireland or Scotland in Oita on October 20 depending upon the outcome of this weekend's matches.

Japan famously stunned the Springboks 34-32 at the 2015 World Cup in England although South Africa hammered them 41-7 in a warm-up match for this edition in September.

Erasmus, pleased to have a "clean bill of health" across his whole squad after he made 13 changes to the side that beat Italy 49-3, said:

Erasmus, who recalled he had lived on the same street as some of Ireland's players in Limerick for two years during his time in charge of Irish provincial side Munster, added: "I know the Irish so well, and they are so professional.

"They have been under pressure and they handle it well. They will be a big threat, and I will be nervous if we play them," added Erasmus, whose side lost their opening match at Japan 2019 to reigning champions and arch-rivals New Zealand.

"Japan is a much bigger threat than people think they are. They smashed teams like Fiji in the Pacific Cup, and they beat Ireland (19-12) the other day.

"Scotland can still sneak in there... We'll enjoy these next two days off, watch those games and then just buckle up and prepare as well as we can."

Canada, who came into this match on a six-day turnaround after being hammered 63-0 by the All Blacks, had to play more than half the game a man down after replacement lock Josh Larsen saw red for a shoulder charge on Springbok prop Thomas du Toit.

They have yet to win a match at Japan 2019 but will look to finish with a flourish against fellow minnows Namibia on Sunday.

"We've planned for this game for a long while," said Canada coach Kingsley Jones of the Namibia fixture.

"There'll be a lot of rest and recovery. I think it's going to come down to the legs of the guys on Sunday."

Asked whether victory would mean Canada had enjoyed a successful World Cup, the former Wales back-row replied: "It would be considered, from my point of view, very successful if we did get the win. "But it's about performance against a team that's at a similar level to us."