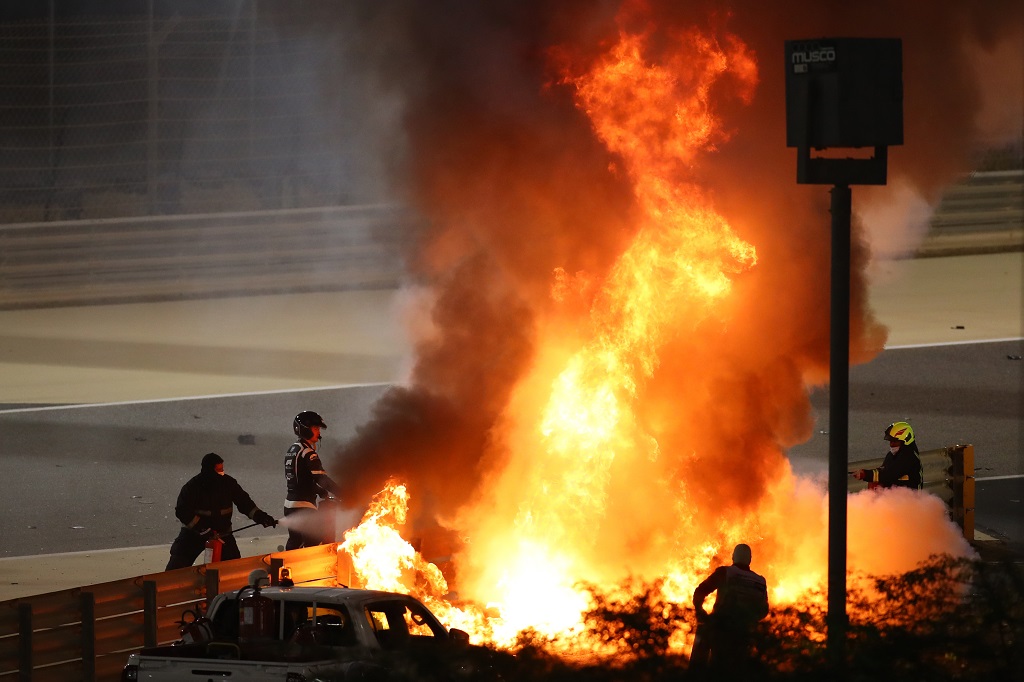 Fire marshals put out a fire on Haas F1's French driver Romain Grosjean's car during the Bahrain Formula One Grand Prix at the Bahrain International Circuit in the city of Sakhir on November 29, 2020. Bryn Lennon / POOL / AFP

MANAMA - Race officials and drivers praised the modern safety systems developed for Formula One on Sunday after Romain Grosjean said he was "okay" after surviving a high-speed crash and fireball blaze on the opening lap of the Bahrain Grand Prix.

The Frenchman's car rammed into the barriers as he braked hard from around 250 km/h during the opening lap, the front part hammering into the steel guardrails which buckled.

Grosjean, 34, trapped in his cockpit, flew under the barrier as it gave way and as his car burst into flames, splitting in two on impact, but managed to escape with only "light burns" to his hands and ankles.

"Hello everyone, just wanted to say I'm okay, well, sort of okay," said Grosjean from his hospital bed in a video posted on social media.

"Thank you very much for all the messages."

Safety and official medical car driver Alan van der Merwe was on the scene within seconds as he followed the field after the start of the race and along with chief medical officer Dr Ian Roberts they battled the blaze to save Grosjean's life.

"It's a miracle that he's alive," said 1996 world champion Damon Hill, who was Ayrton Senna's team-mate at the 1994 San Marino Grand Prix when the Brazilian was killed.

Van der Merwe said: "It was a big surprise for us as well, we've never seen that much fire in 12 years.

"Romain started to get out of the car himself which was pretty amazing after an accident like that. It was a relief to see he was okay. It just goes to show all the systems we've developed worked hand in hand --  the halos, the barriers, the seatbelts, everything all worked as it should.

"Without just one of those things, it could have been a very different outcome."

Grosjean lost control of his Haas car after clipping the front left wheel of Daniil Kvyat's Alpha Tauri, having skewed right in the intense battle for position at Turn Three on the opening lap.

His Haas team boss Guenther Steiner said: "When you see something like this the only thing you think is 'I hope we get lucky' –- you don't think how it happened or whatever.

"I would like to thank all the marshals. They did a fantastic job to get him away as quick as possible from the fire. It was amazing what they did."

Grosjean said the once controversial 'halo' safety device had saved his life.

"I wasn't for the halo some years ago but I think it's the greatest thing we brought to Formula 1 and without it I wouldn't be able to speak to you today," he added.

- Grosjean 'conscious at all times' -

Steiner added that Grosjean, who is set to leave F1 at the end of the season, had suffered "light burns on his hands and ankles".

Grosjean was taken to hospital, with reports suggesting he had also suffered a suspected broken rib.

"The driver self-extricated, and was conscious at all times," the FIA said in a statement. "He was taken to the medical centre before being transferred to Bahrain Defence Force (BDF) Hospital by helicopter where he is undergoing further evaluation."

The race restarted after a lengthy delay, with newly-crowned world champion Lewis Hamilton going on to take victory.

"I'm so grateful Romain is safe," Hamilton wrote on Twitter.

READ: Hamilton scorches to pole in Bahrain with record-breaking lap

"Wow... the risk we take is no joke, for those of you out there that forget that we put our life on the line for this sport and for what we love to do.

"Thankful to the FIA for the massive strides we've taken for Romain to walk away from that safely."

The safety car was quickly back in action following the restart as Lance Stroll's car flipped over.

The Canadian's Racing Point made contact with Kvyat's Alpha Tauri at Turn 8, his car coming to a halt upside down.

Stroll was uninjured and stayed cool inside his car.

"I'm okay, just hanging upside down," he told his team before climbing out.