Fans pray for rain relief ahead of India-Pakistan clash 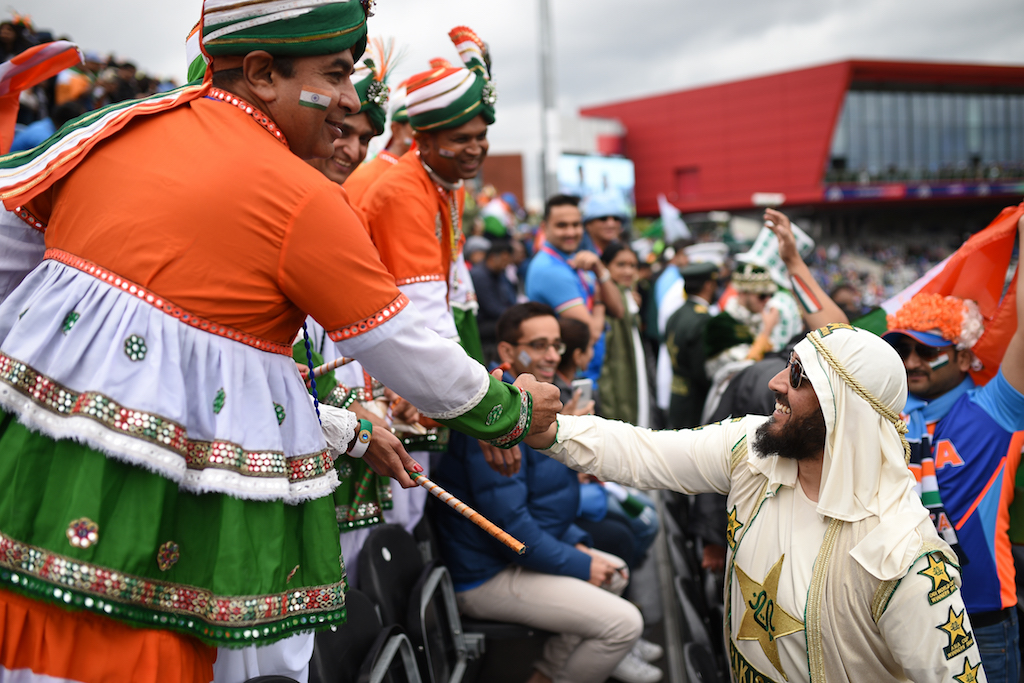 A Pakistan supporter (R) shakes hands with his Indian couterparts in the crowd ahead of the 2019 Cricket World Cup group stage match between India and Pakistan at Old Trafford in Manchester, northwest England, on June 16, 2019.

MANCHESTER - India and Pakistan fans were divided in colours but united in their desire for rain to stay away from the highly-anticipated World Cup clash in Manchester on Sunday.

The arch rivals are set to lock horns in one of the biggest games of the tournament, with an expected television audience of up to one billion people.

But the threat of rain looms large over the World Cup clash at Old Trafford, with a light drizzle in the morning already forcing the ground staff to cover the main pitch.

"We have come all the way from Ohio to witness this spectacle and hope that rain doesn't spoil our party," Harsho Singh, an Indian fan, told AFP.

"My wife and I came were so glad that it was sunny at 7 in the morning but suddenly it has turned grey. God give us a match even if it is a shortened one," he added.

Players from both the teams have made their way into the stadium and are going through their practive drills before the big game.

READ: Battle of wits and wickets before Pakistan, India showdown

Pakistan won the boss and elected to bowl first, with a large gathering of Indian fans taking their seats at the stadium that can house 26,000 spectators.

Pakistan fans are also trickling in with a splash of green on their dresses and bodies to mark their support for the Sarfaraz Ahmed-led side.

"Inshallah (God willing) Pakistan will win but for that to happen a match should happen and I pray to God that rain stays away," Mohammed Irfan, a Pakistan fan with orange beard and his country's flag wrapped around him, told AFP.

"India might be a strong team but we can beat them. We have some great players in Babar Azam and Mohammed Amir," the 55-year-old man said.

Games between the two countries, who currently only face each other in multi-nation tournaments, are always about more than just what happens on the pitch.

However, India captain Virat Kohli had downplayed the hype surrounding in the pre-match presser and said, "enjoy the game of cricket" in his parting message.