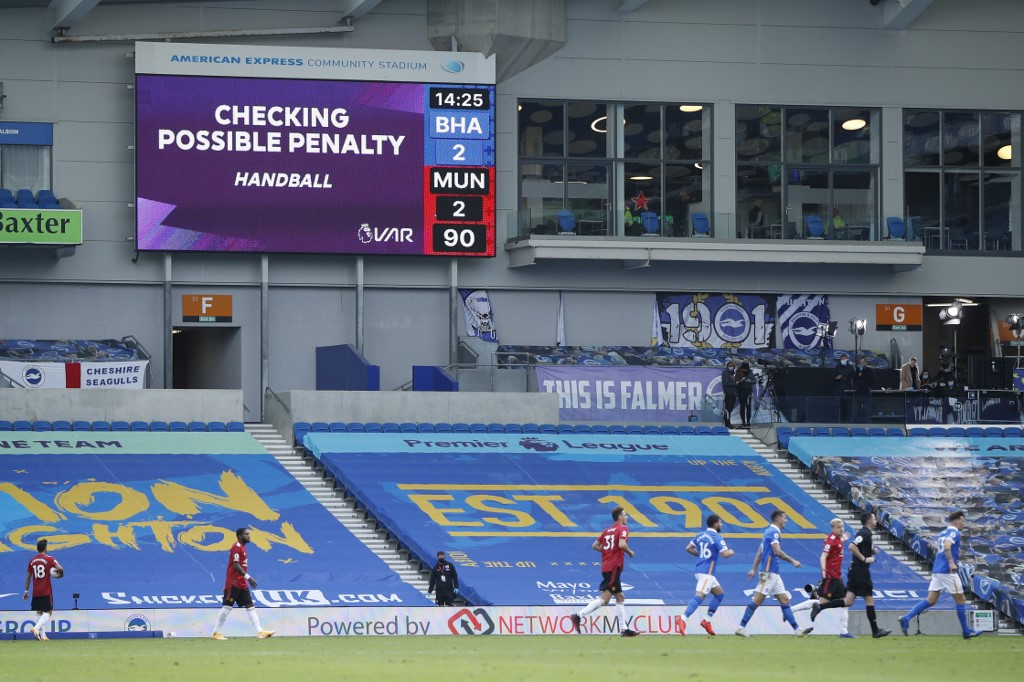 Referee Chris Kavannagh checks for a possible penalty decision during the English Premier League football match between Brighton and Hove Albion and Manchester United at the American Express Community Stadium in Brighton, southern England on September 26, 2020.

BRIGHTON - Bruno Fernandes scored a penalty, awarded on a VAR review after the final whistle had blown, as Manchester United rode their luck to register their first Premier League points of the season with a thrilling 3-2 win at Brighton on Saturday.

The Seagulls hit the woodwork five times and thought they had earned a deserved point when Solly March headed home to equalise in the 95th minute.

However, Neal Maupay's handball was penalised by referee Chris Kavanagh after he had blown for full-time and Fernandes converted from the spot in the 100th minute.

Pre-season hopes that United could mount a title challenge to their biggest rivals Liverpool and Manchester City dissipated after a dire display in losing 3-1 to Crystal Palace last weekend.

Ole Gunnar Solskjaer resisted the temptation to make wholesale changes and got more of the same for the first 45 minutes as Brighton controlled the game.

Leandro Trossard hit both posts with shots from outside the box, while Adam Webster's looping header came back off the crossbar.

It took United 33 minutes to muster a flowing move involving the front three of Marcus Rashford, Anthony Martial, and Mason Greenwood, who found the net but the goal was ruled out for offside against Rashford.

Brighton finally got their reward when the tireless Tariq Lamptey burst into the box from right wing-back and was clipped by Fernandes.

The United midfielder was lucky to escape a second yellow card, but Maupay ensured they did pay the penalty with a cheeky chip down the middle of the goal as David de Gea dived to his left.

However, the lead lasted just three minutes as from a fiercely driven Fernandes free-kick, Nemanja Matic turned the ball back across goal and Lewis Dunk turned the ball into his own net.

VAR came to the rescue of both sides within the first 10 minutes of the second half.

United had already conceded a penalty in consecutive games for the first time in 11 years in the Premier League and thought they had given a away a second spot-kick of the match when Paul Pogba was penalised for pulling back Aaron Connolly.

However, Kavanagh overturned his initial decision when he saw a replay of the incident.

At the other end, United's front three was beginning to click as Rashford swept home Greenwood's low cross but this time VAR ruled against United with the goalscorer marginally offside.

There was no stopping Rashford moments later when he raced onto Fernandes's ball over the top and left Ben White trailing on the ground before his deflected effort found the top corner.

Brighton's bad luck continued when March became the next player to hit the woodwork as his low shot across De Gea came back off the inside of the far post before Trossard smashed against the bar with just the Spanish number one to beat.

The Seagulls seemed to finally have their reward when March ghosted in at the back post to head home Alireza Jahanbakash's cross.

But in a chaotic finale, Harry Maguire's header from a corner struck Maupay's arm and to Brighton's dismay, a penalty was awarded.

Fernandes has never missed a top-flight penalty and stayed cool under the pressure to ensure Solskjaer's men escaped with all three points.

END_OF_DOCUMENT_TOKEN_TO_BE_REPLACED

COVID-19 in SA: Could selenium be the mineral miracle?