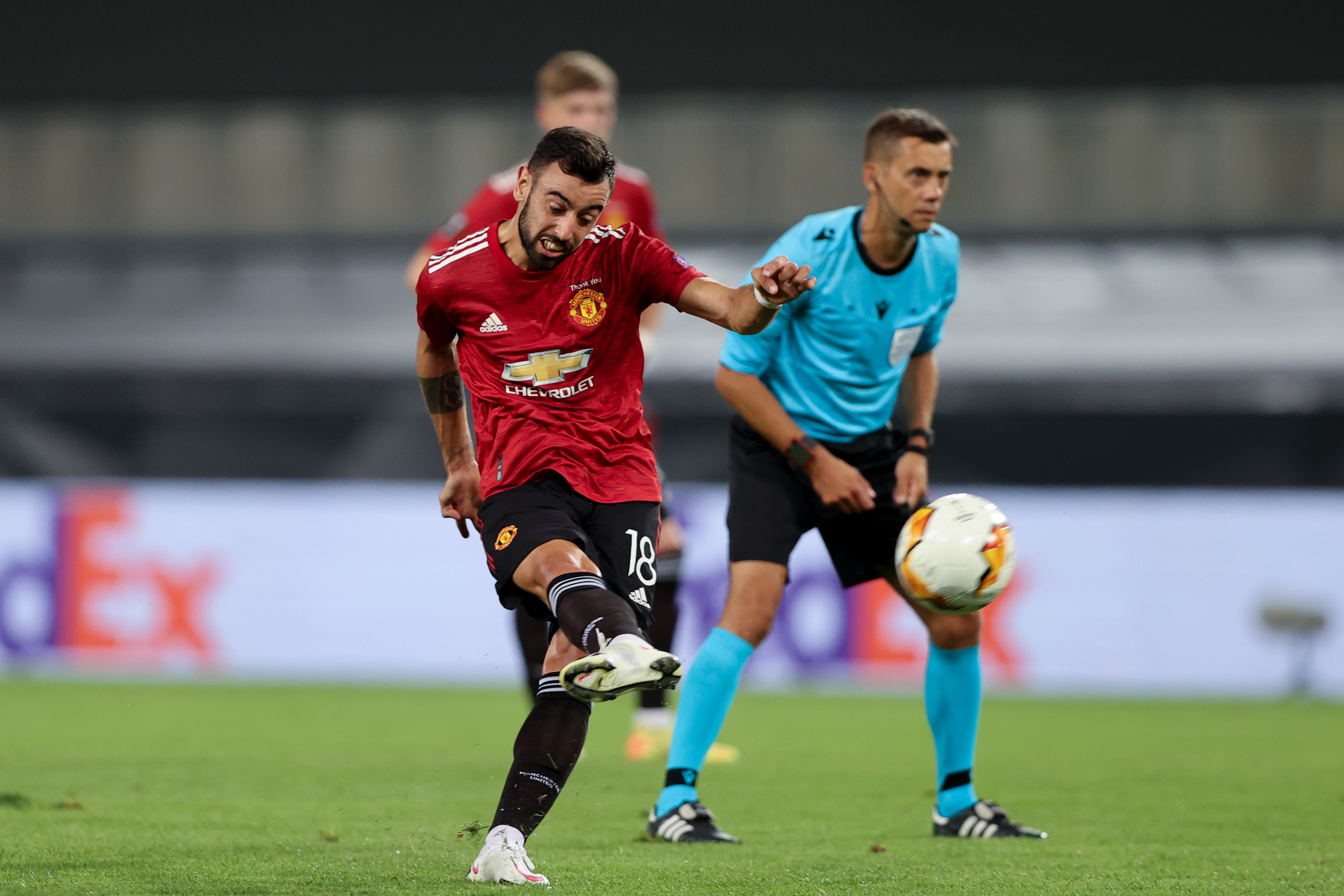 COLOGNE - Bruno Fernandes scored a penalty in extra time as Manchester United scraped past FC Copenhagen 1-0 on Monday in the quarter-finals of the Europa League, reshaped into an eight-team straight knockout tournament in Germany due to the coronavirus pandemic.

The Portugal international notched his competition-best seventh goal of the season as United set up a semi-final clash against Sevilla or Wolves, joining Inter Milan in the last four following the Italian side's 2-1 victory over Bayer Leverkusen in Dusseldorf.

"Third time this season we've been to the semis, every competition we've been in. Delighted we've gone through, we deserved to win tonight," United manager Ole Gunnar Solskjaer told BT Sport.

"Their keeper was fantastic, unbelievable. We hit the post a few times, there were a couple of VAR decisions against us. It could have been one of those nights that you end up with penalty shoot outs. They made it hard for us."

All games from the quarter-finals onwards in this season's Europa League are being played behind closed doors as one-off ties across four venues -- Cologne, Duisburg, Dusseldorf and Gelsenkirchen -- in a unique format following a five-month interruption.

Eric Bailly intervened just as Daramy attempted to stab home a bouncing cross, and the Ivorian defender was then played into trouble by Fred with Jens Stage's subsequent effort blocked.

Rashford finally tested Karl-Johan Johnsson just before the interval with a long-range shot -- the first of a multitude of saves for Copenhagen's outstanding Swedish goalkeeper.

Greenwood looked to have put United ahead as he drilled in via the far post moments later only for the teenager to be ruled offside following a VAR review.

He again went close early in the second half when he slammed against the upright, with Fernandes promptly smacking the opposite post with a dipping 20-yard drive.

The Portugal international, who scored five times in the group stage with Sporting, stung the palms of Johnsson with another hit from distance -- shortly after Aaron Wan-Bissaka made a desperation block to thwart Bryan Oviedo after a mesmerising dribble from Rasmus Falk.

Appearing in their first European quarter-final, and the first Danish club to reach this stage since 1997, Copenhagen continued to frustrate United as they sought a repeat of their 1-0 win when the clubs last met in the Champions League group stage in 2006.

Martial nearly won the game in normal time but again a sprawling Johnsson tipped away his curling attempt that appeared destined for the top corner.

The France striker was once more repelled by Johnsson at the start of extra time, but Martial won a penalty as United kept the attack alive and the striker was upended by Andreas Bjelland.

Fernandes blasted home from the spot on 95 minutes but Solskjaer's team were left to sweat until the end as Johnsson pulled off sensational stops from the Portuguese and substitute Juan Mata, with Victor Lindelof the third United player to strike the post.

United though ultimately ensured their 2019-20 campaign will extend into a second year, having started the season 365 days ago with a 4-0 Premier League win over Chelsea. Awaiting them on Sunday will be Sevilla -- who have won the Europa League and its precursor, the UEFA Cup, a record five times -- or domestic rivals Wolves.

Former United striker Romelu Lukaku grabbed the decisive goal for Antonio Conte's Inter against Leverkusen as the Serie A runners-up moved a step closer to adding to their titles from 1991, 1994 and 1998.

Inter struck first as Nicolo Barella guided in from the edge of the area on 15 minutes, with Lukaku bundling in a second six minutes later.

Kai Havertz reduced the deficit in possibly his final game for Leverkusen on 25 minutes after exchanging passes with fellow Germany international Kevin Volland, but Inter held on to seal their place against Shakhtar Donetsk or Basel in next week's semi-final.

"The defence did a tremendous job again tonight. We are growing but we have to learn to kill games off when we have the chances to do it, and we didn't tonight," said Lukaku.

"Now we have time to recover physically and prepare for another great game. We will have to be ready."