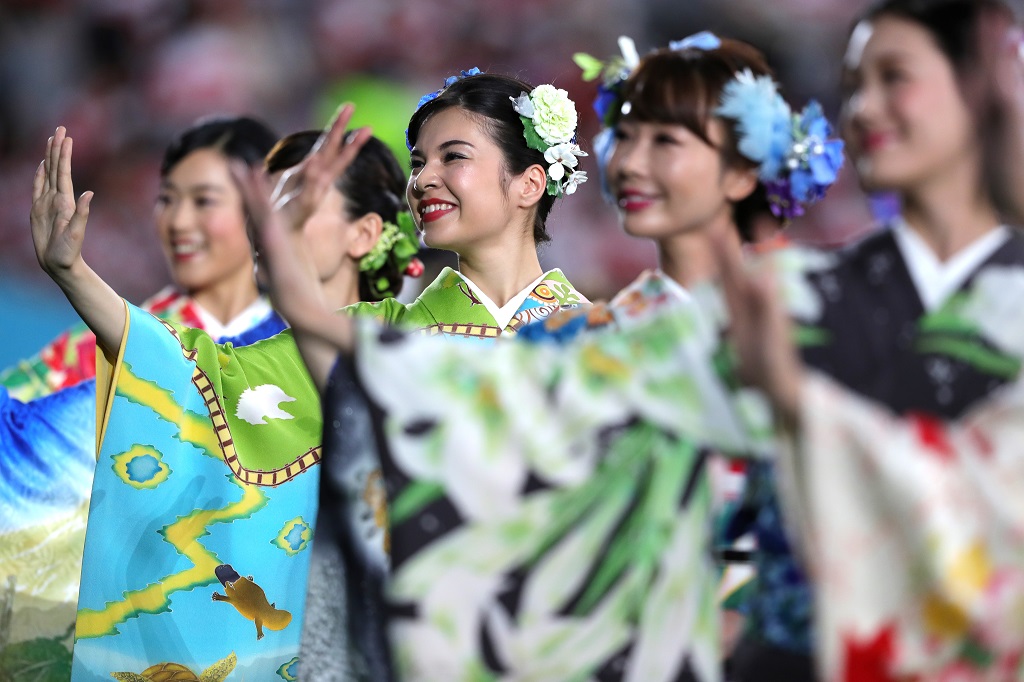 Dancers perform in the opening ceremony ahead of the Rugby World Cup 2019 Group A game between Japan and Russia at the Tokyo Stadium on September 20, 2019 in Chofu, Tokyo, Japan.

TOKYO - Rugby fever swept through Japan on Friday as fans flocked to Tokyo Stadium for the start of the 2019 World Cup, ushering in the tournament to Asia for the first time with a lavish opening ceremony inspired by Japanese-style festivals and Kabuki dance.

Japanese "taiko" drums set the beat as the names of the 20 participating countries were projected onto a likeness of Mt. Fuji. Huge cheers went up for defending champions New Zealand but the biggest, of course, were reserved for hosts Japan.

Incredible scenes as Mount Fuji is beautifully depicted with all 20 team's emblems surrounding it. This is one special Rugby World Cup opening ceremony #RWC2019

A choir of children sang the "World in Union" theme before former All Blacks captain Richie McCaw raised the Webb Ellis trophy to rousing cheers from the 50,000 capacity crowd.

"The stage is set ... to make this the best World Cup ever,” World Rugby chairman Bill Beaumont said.

The hosts are kicking off the tournament against Russia on Friday and supporters both local and from overseas turned out overwhelmingly in the red and white jerseys of Japan to root for the home side.

Fans squeezed on to trains for the journey to the stadium on the western edge of the city, then drank beer, had their faces painted and sang songs as they walked from the station to the venue. `

"I couldn't sleep well and woke up early in the morning. I'm so excited," said Hiroshi Moriyama, who painted his upper body in the colours of the Japan uniform with the message "Welcome RWC 2019 Japan" on his back.

"So excited, can't wait. It's going to be awesome and the atmosphere has already been awesome so yeah all dressed in the gear, ready to go. Go Japan!" said Maia, pumping her fist in the air.

Many fans also said they were excited to see the blockbuster clash between New Zealand and South Africa on Saturday, a sign that local fans' interest in the World Cup will spread well beyond the home team’s matches.

Strong support for the tournament will be welcome news for World Rugby, who took a major risk in awarding the tournament to Japan 10 years ago, taking the World Cup out of the sport's traditional heartlands for the first time.

Japan, ranked 10th in the world, are looking to advance to the quarterfinals for the first time after coming oh-so-close in 2015 in England, where they scored one of the sport's biggest ever upsets with a victory over South Africa.

In Pool A they will also face Ireland, Samoa and Scotland.