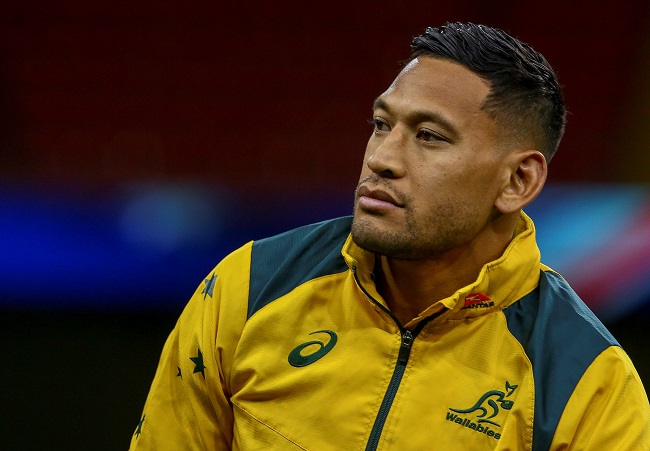 Australia's wing Israel Folau attends the captain's run training session at the Principality stadium in Cardiff, south Wales on November 9, 2018, on the eve of their autumn international rugby union match against Wales.

AUSTRALIA - Money flowed in Friday for rugby star Israel Folau after he launched a controversial crowdfunding campaign to pay his legal fees in a battle with Rugby Australia who sacked him for homophobic comments.

Folau, a devout Christian, was fired last month after a Rugby Australia tribunal found him guilty of "high-level" misconduct for posting on social media that "hell awaits" gay people and others he considers sinners.

He has since taken the divisive issue to Australia's employment watchdog, the Fair Work Commission, asserting that he simply posted a message from the Bible.

His case reportedly involves claims of breach of contract and unlawful termination under the Fair Work Act, which protects employees from being sacked because of their religion.

But taking on Rugby Australia in the courts will not be cheap and the 30-year-old is asking supporters for help to raise Aus$3 million (US$2 million), despite previously being one of the highest-paid players in the world.

"I believe the termination of my contract is unlawful, which is why I have started legal proceedings against Rugby Australia and Rugby NSW," Folau, who played 73 Tests, said in a message on the GoFundMe site Friday.

"In response, Rugby Australia have already said that they will 'divert significant resources' to fight me in court.

"I would be very grateful for your support. I have the fight of my life on my hands and every little bit will help," he added.

Folau revealed he had already spent Aus$100,000 of his own money dealing with the issue and suggested the case could take years to resolve if it ends up in the High Court.

Super Rugby's most prolific try scorer also Friday launched a Twitter hashtag #standwithizzy, asking: "Do you believe in the right of Australians to practice their religion without fear or discrimination in the workplace?"

Earlier this month, the Sydney Morning Herald said he was seeking Aus$10 million in his claim, including for lost sponsorship and marketing opportunities, a sum it said could bankrupt Rugby Australia if they lose the case.

The fullback was on a four-year contract worth more than Aus$1.0 million annually when he was sacked. His dismissal followed earlier incendiary remarks about the gay community last year, for which he escaped sanction.

Rugby Australia, which had no immediate comment on the funding campaign, insists his axing was purely a breach of contract issue after it said he agreed not to disparage anyone based on sexual grounds.

Folau's comments and subsequent sacking split the rugby community, and his plea for money appears to have done the same.

The tabloid Sydney Daily Telegraph called him "shameless", claiming he owns a multi-million dollar property portfolio. Comments on its website reflected the differing opinions hold by its readers.

"Bloody cheek. Put your hand a little deeper into your bulging pockets Izzy," said one poster, but another noted: "The only shameless thing about this is the way Rugby Australia handled this."

Meanwhile, the popular Squidge Rugby YouTube channel has started its own crowdfunding campaign to raise money for British LGBT charity Stonewall under the banner: "Israel Folau's intolerance will not be tolerated."

"The money will be going to a good cause," said Squidge Rugby creator Robbie Owen, who is aiming to raise 1.6 million pounds but has so far only managed 635 pounds.

"And it'll send the message once and for all: If he wants to continue to use his profile and platform to preach hate, Israel Folau picked the wrong sport, because intolerance such as his will never be tolerated in rugby," he added.