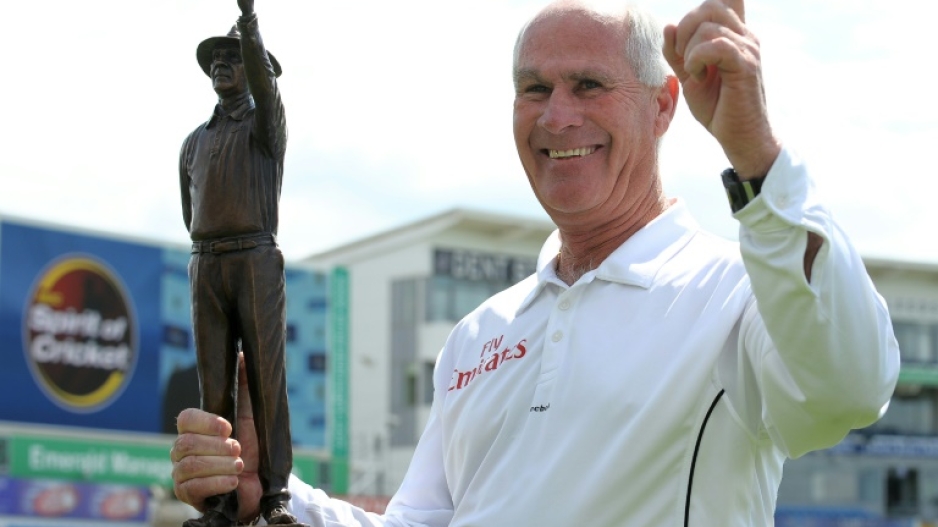 South African Rudi Koertzen holds a statue of himself while umpiring his final Test, between Australia and Pakistan in England during 2010.

CAPE TOWN - Former South African umpire Rudi Koertzen, labelled the 'slow finger of death' by the media, has died in a car accident, a family member told AFP on Tuesday. He was 73.

"Rudi suffered fatal injuries after an accident near Stilbaai between Cape Town and Gqeberha," said the family spokesperson, who requested anonymity.

"My father went to a golf tournament with some friends and they were expected to come back on Monday, but it seems they decided to play another round of golf," his son Rudi told a Gqeberha radio station.

The South African team will wear black armbands on Wednesday in honour of Koertzen when they face England at Lord's in London in a Test match.

Koertzen first umpired in 1981, handled his maiden international assignment 11 years later, and retired in 2010 after a Test between Australia and Pakistan in Leeds, England.

He became known as the 'slow finger of death' because he very slowly raising his finger whenever indicating a batsman was out.

"Every umpire has their trademark and that was mine. The media labelled it the 'slow finger of death' and I found that pretty interesting. There is a story behind it," Koertzen said in an interview.

"When my umpiring career first began, I used to hold my hands in front of me and every time there was an appeal, I would fold them against my ribs," said Koertzen.

"Then someone told me 'Rudi, you cannot do that. Every time you raise your hands to fold them, the bowler thinks you are going to give him a wicket'."

"So I started clasping my wrists at the back. The finger comes out slowly because it takes time for me to release my grasp at the back."