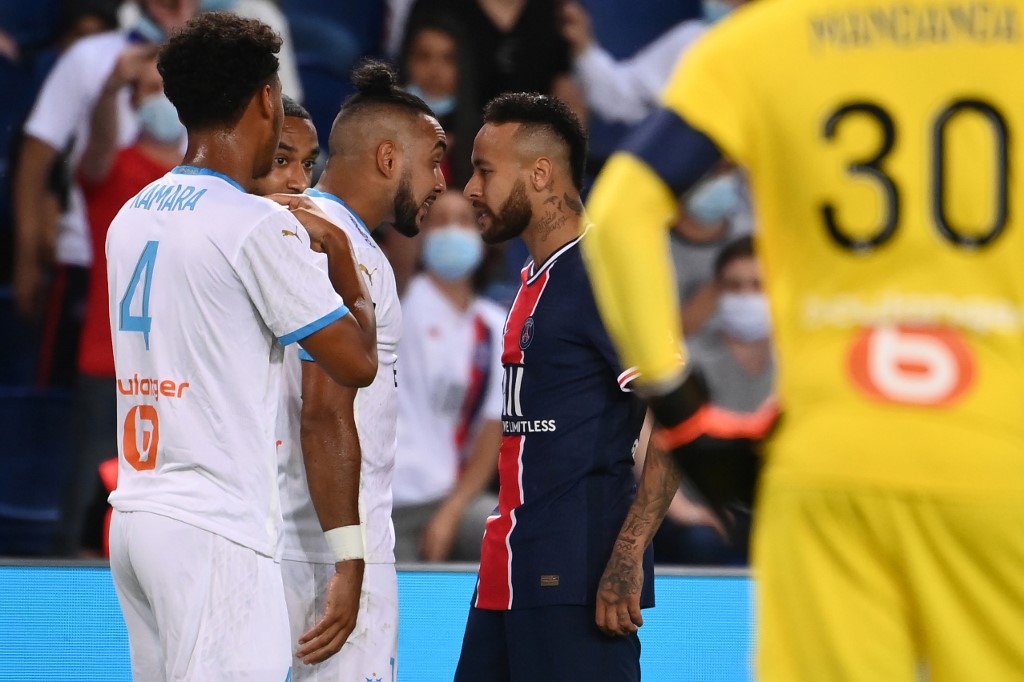 PARIS - Neymar insisted he had been the victim of racism as he was one of five players sent off in a mass brawl at the end of Marseille's 1-0 win over Ligue 1 champions Paris Saint-Germain on Sunday.

PSG's Brazilian star appeared to accuse Alvaro Gonzalez of calling him a "monkey" in a series of furious tweets after he was sent off in injury time for slapping the Marseille defender on the back of the head.

"Look at the racism. That's why I hit him," Neymar, who was returning from coronavirus quarantine, said as he left the pitch. Gonzalez later denied making a racist comment.

"The only regret I have is not hitting this idiot in the face," Neymar, the world's most expensive player, tweeted after the game.

Neymar was red-carded after a VAR review, while teammates Layvin Kurzawa and Leandro Paredes were also sent off. Marseille striker Dario Benedetto and defender Jordan Amavi were also expelled.

"It's easy for VAR to show my 'aggression'. 'Now I'd like to them to show the image of the racist who called me a 'MONKEY SON OF A BITCH'. I'd really like that!" Neymar tweeted.

Florian Thauvin's close-range volley on 31 minutes earned Marseille a first victory over their bitter rivals since November 2011 but the ugly scenes overshadowed the game at Parc des Princes.

Neymar "told me it was a racist insult, but I didn't hear anything on the pitch", PSG coach Thomas Tuchel said.

"There is no place for racism in football but I don't think that was the case," Marseille coach Andre Villas-Boas told Telefoot. "We'll have to look at it."

According to Telefoot, Gonzalez replied "What racism?" when he was asked about the incident. He also tweeted a picture of himself surrounded by multi-racial teammates.

"There's no place for racism," the Spaniard wrote, adding: "Sometimes you have to learn to lose and take it on the field."

"Fourteen yellow cards and five reds means the match was out of control," said Leonardo. "Not to criticise the referee but perhaps it's not the time to officiate a 'clasico'."

Tuchel tried to downplay the defeat.

"I'm not angry. I think you have to separate the performance and the result. We played a great match, I'm happy with the quality, mentality and the effort," he said.

"I told the players if we continue to play like that we'll win every match. It was a great performance but the result is what it is."

PSG, runners-up to Bayern Munich in the Champions League final last month, have now lost their opening two games of a season without scoring for the first time since 1978/79.

A frenzied schedule awaits Tuchel's coronavirus-hit side, starting with the visit of Metz in midweek and a trip to Nice next Sunday, and Neymar now faces a suspension.

Marseille find themselves with an early six-point advantage as they attempt to close the gap on PSG, French champions seven of the past eight years.

After fielding a depleted line-up at Lens on Thursday, Tuchel was able to recall Neymar and Angel Di Maria for a match played in front of around 4,000 supporters in Paris.

However, Kylian Mbappe remained absent after testing positive for the coronavirus on France duty at the start of the week with Mauro Icardi and Marquinhos also still missing.

Marseille 'keeper Steve Mandanda produced a magnificent reflex to keep out an effort from Marco Verratti just a minute in as tempers bubbled over frequently in the capital.

Thauvin, who shone in Marseille's opening 3-2 win at Brest before the international break, made the breakthrough when he turned in a Dimitri Payet free-kick from point-blank range.

Di Maria found the net for PSG just past the hour but had strayed behind the last defender, and Marseille's celebrations were cut short in similar fashion moments later when a Benedetto goal was ruled offside.

PSG's last goal came in the 3-0 win over RB Leipzig in the Champions League semi-final on August 18, and Neymar poked wide from a Pablo Sarabia cross before the contest deteriorated at the finish.

"It's a bit disappointing we ended like that," said Thauvin. "We didn't want to get into that sort of game."