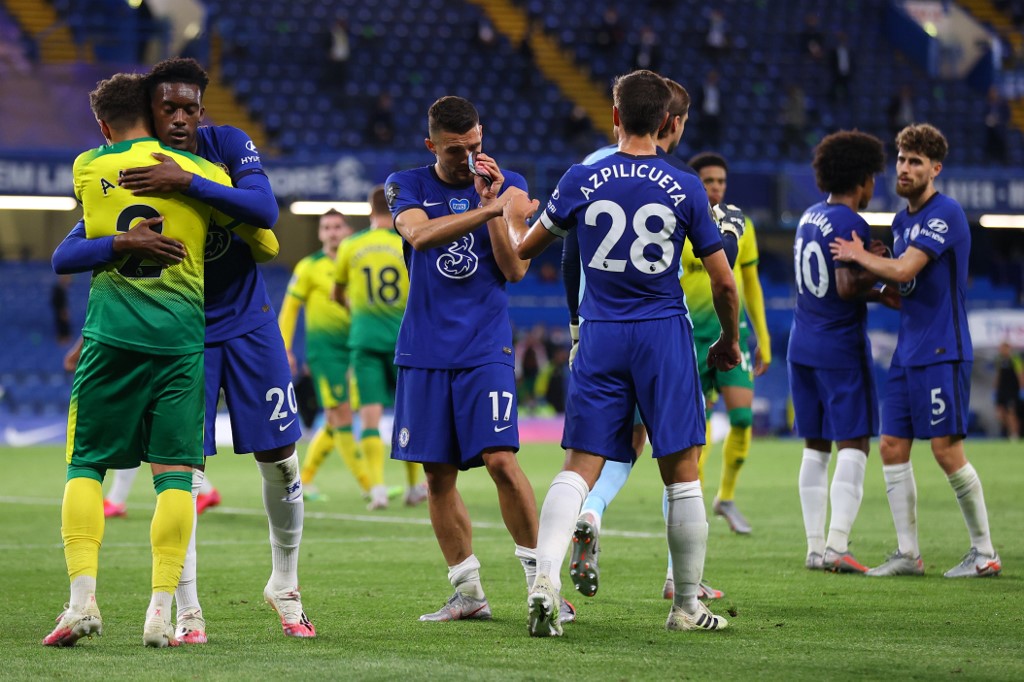 Players react at the final whistle during the English Premier League football match between Chelsea and Norwich City at Stamford Bridge in London on July 14, 2020.

LONDON- Frank Lampard admitted Chelsea are struggling with nerves as they chase a place in the Champions League next season after Olivier Giroud scored the only goal in a 1-0 win over already relegated Norwich at Stamford Bridge on Tuesday.

Victory opens up a four-point lead for third-placed Chelsea over Leicester and Manchester United, who both have a game in hand later this week.

But Lampard knows there is still plenty of work to do with a trip to champions Liverpool and sixth-placed Wolves visiting Stamford Bridge on the last day of the season to come in Chelsea's final two league games of the season.

"I want more but that can wait. Where we are at as a team and our position in the table, three points is everything," said Lampard.

Lampard was furious with his side's lack of fight in surrendering to a 3-0 defeat at Sheffield United on Saturday that plunged Chelsea's chances of a top-four finish into doubt.

The former England international made five changes from the battering at Bramall Lane with Giroud among those restored to the starting line-up.

Chelsea have already significantly bolstered their frontline for next season with the signings of Timo Werner and Hakim Ziyech.

But Giroud has more than justified the decision to also extend his contract by a year during football's shutdown as Chelsea's most potent striker since the restart.

"He's a big character for us and scoring important goals," added Lampard.

Giroud saw a number of chances come and go in the first half as an attempted lob over Tim Krul fell gently into the Dutch 'keeper's arms before he sliced well over the bar when unmarked inside the area.