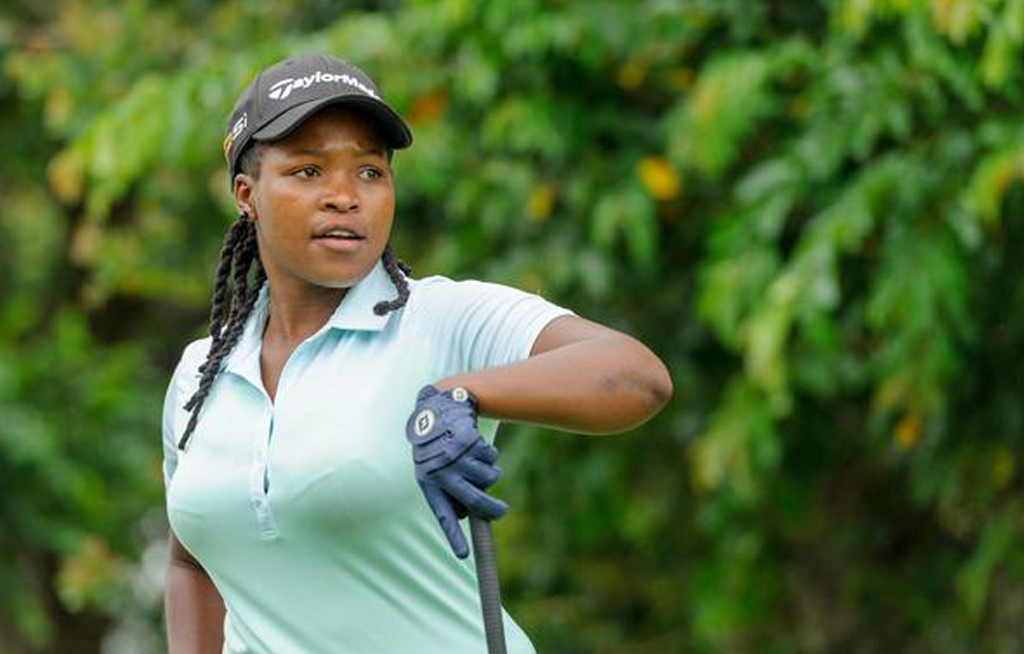 JOHANNESBURG - Amateur Zethu Myeki notched up a victory, joined a new golf union and moved to Gauteng at the start of the year as she prepares to write a new chapter in her golfing career.

Myeki, 24, celebrated New Year in her native East London, but three weeks into the year, she moved to Randpark, joined Ladies Golf Gauteng and became a member at Randpark Golf Club. In early February, she flew to Port Elizabeth and returned with Eastern Province Championship trophy.

These four black women are the pioneering women golfers of Southern Africa, playing on the pro Sunshine Tour in South Africa: They are: Nobuhle Dlamini of Swaziland, Zethu Myeki (amateur), Siviwe and Yolanda Duma from East London in SA pic.twitter.com/U5dej8PfuG

Myeki was three off the pace after an opening three-under-par 69, but she reeled in overnight leader Kaiyuree Moodley with a four-under 68 in the second round at Port Elizabeth Golf Club. She stretched a one-shot lead to two strokes at the turn in the final round and she provided the most memorable moments of the championship with incredible par-saves and birdies at 13 and 18 for a closing 71.

The six-stroke victory on eight-under 208 followed her success in the season-ending Mpumalanga Open last November.

At the end of a frustrating 2017 season – punctuated by four runner-up finishes and six further top five placings – Myeki celebrated a three-shot victory at Ermelo Golf Club. And the good run of form continued at Sun City where, a week later, she outpaced the professional field in the Sun PinkStig Finale on the Sunshine Ladies Tour at the Gary Player Country Club to finish third overall.

For the last two seasons, the Border golfer maintained a third place ranking in the Women&39;s Golf South Africa Senior Rankings, but she has set herself some lofty goals for 2018.

She is targeting the top spot, hence the move to Gauteng.

“My biggest goal is to complete my studies,” said the Ernie Els and Fancourt Foundation member, who just started her third year studying Golf Club Management through the Club Managers Association of America.

“My second goal is to shoot for the number one spot in the rankings. To give myself a realistic chance to get to number two, and then number one, I had to make this move. I have had the most amazing support from the moment I joined the South African Golf Development Board under their head coach Michelle de Vries 11 years ago, and I’ll never be able to repay Michelle or the SAGDB for all they did for me to give me a career in golf.

“But to reach number one, I need to compete more frequently. I need to raise my game and I need to play against stronger competition. It was a really hard decision to leave East London, my family and friends and everything that is familiar to me, but I believe I’ve done the best thing for my career.”

North’s Danielle du Toit sealed a match play spot in the All India Ladies Amateur Championship, but Zethu Myeki from Border was forced out in a six-way play-off for the final 4 spots in the 36-hole qualifier in Bangalore, India on Wednesday.
Read More: https://t.co/AQIUi1667h pic.twitter.com/XQhsyBWs3L

“I gain so much from the camps and this time, in particular,” she said. “I’d really been struggling with my swing. Our national coach Val Holland and my new coach Constanza Trussoni identified some of the issues and I was able to work on my swing before the Eastern Province Champs.

“It wasn’t 100 percent when I arrived in Port Elizabeth and I struggled to hit the ball with confidence. My short game saved me, though. I made so many great up-and-downs and sand-saves and I putted really well. It felt really great to win after losing the last two years by one shot.”

Her next start is the Border Championship at East London Golf Club in on Friday, and Myeki be out for blood again, having lost to Swiss amateur Chloe Grand by one shot last year.

“I am in a really good place,” said Myeki. “I have the backing of the Ernie Els and Fancourt Foundation and GolfRSA. I have a good home with Judy (Katzenellenbogen) and my studies are going well. I’ve been welcomed by Ladies Golf Gauteng and Randpark Golf Club. I’ve enlisted a new coach. Everything is in place and I set the tone for my season in Port Elizabeth. I’m ready to face all the challenges 2018 will bring.”