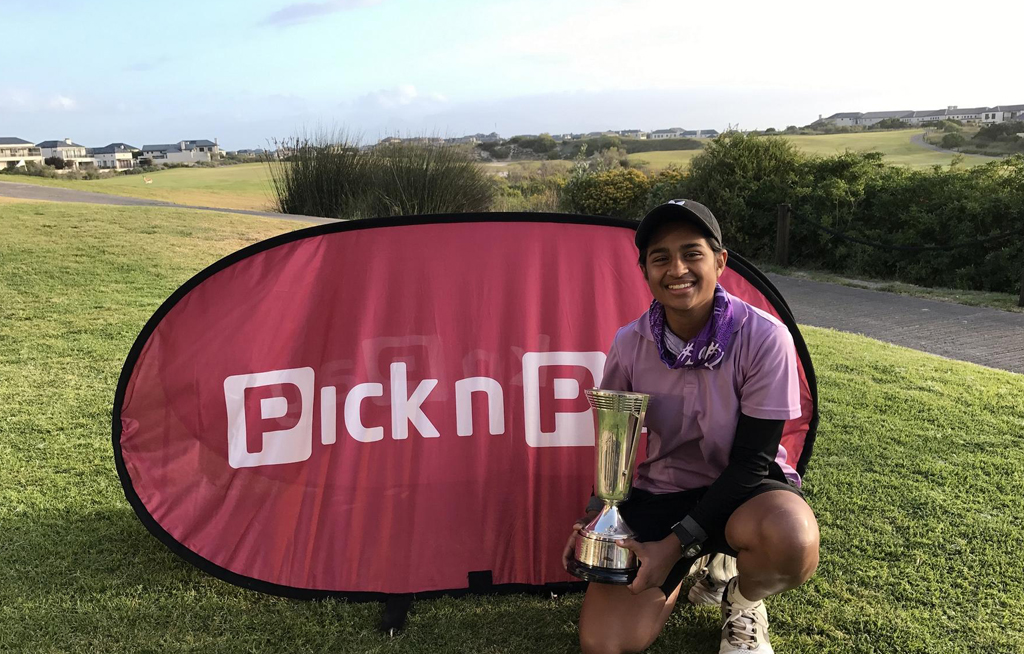 JOHANNESBURG – South Africa’s top-ranked Kajal Mistry continued her dominance of the women’s amateur golf circuit as she raced to her third victory in as many months in the prestigious Ackerman Championship on Sunday.

The 16-year-old from Parkview defied gale force winds and sweeping rain to construct a four-stroke victory on four-under 220 with rounds of 74, 74 and 72 at Atlantic Beach Country Club.

The reigning Sanlam SA Women’s Amateur Stroke Play champion admitted that she had high hopes of winning the Gus Ackerman Trophy when she boarded the plane in Johannesburg for the weekend trip to Cape Town and she was justifiably delighted with the result.

“This was definitely one of my toughest victories yet, but I am absolutely thrilled,” said Mistry.

Although she was two off the pace at the end of the opening round, Mistry didn’t feel that she had left herself with too much to do over the last two rounds on Sunday.

“The conditions on day one were extreme,” she said. “The driving rain wasn’t that bad, but it was bitterly cold and club selection in the wind was a huge challenge.

“We had three club wind in round one, but it didn’t blow quite as hard on Sunday. It was still two to two and a half clubs, but I knew I still had 36 holes to challenge. I didn’t really feel any pressure.”

Mistry hit enough quality shots for another 74, but Zethu Myeki from Border fired successive rounds of 73 to replace Caitlyn Macnab from Ekurhuleni at the top.

“We both had three bogeys early in the second round,” said Mistry. “I birdied 15, 16 and 18 and Zethu birdied 15, 17 and 18. The difference came down to a double bogey at the seventh, so I told myself to try and limit my mistakes in the final round to give myself a chance to win.”

Myeki took herself out of the competition with a triple bogey at the second, though, and birdies at four and five pushed Mistry clear of the field. She kept control, despite bogeys at seven, 11 and 17 and a lone birdie on the back nine at 15.

“I battled with the putter and all three bogeys were three-putts,” said Mistry. “Luckily no-one made a big charge on the back nine. I am really pleased, because I dearly wanted to win. The Ackerman Championship has so much history and prestige and it’s a real honour to know my name will go on the trophy alongside so many of South Africa’s greats.”

Sarah Bouch from Serengeti Golf and Wildlife Estate finished second on 225, while Kelsey Nicholas from Royal Johannesburg and Kensington tied for third with Myeki on 11-over. Kaylah Williams from Durbanville and Clovelly’s Katia Shaff were the top performers for Western Province and finished in a tie for seventh.

Sonja Jonker from King David Mowbray Golf Club lifted the Raymond Ackerman Trophy after a four-stroke victory in the B-Division. Steenburg’s Michelle Godfrey edged out Marilyn Franklin from Westlake for the Jonathan Ackerman trophy. She won the C-Divison in a count-out on 39 points.