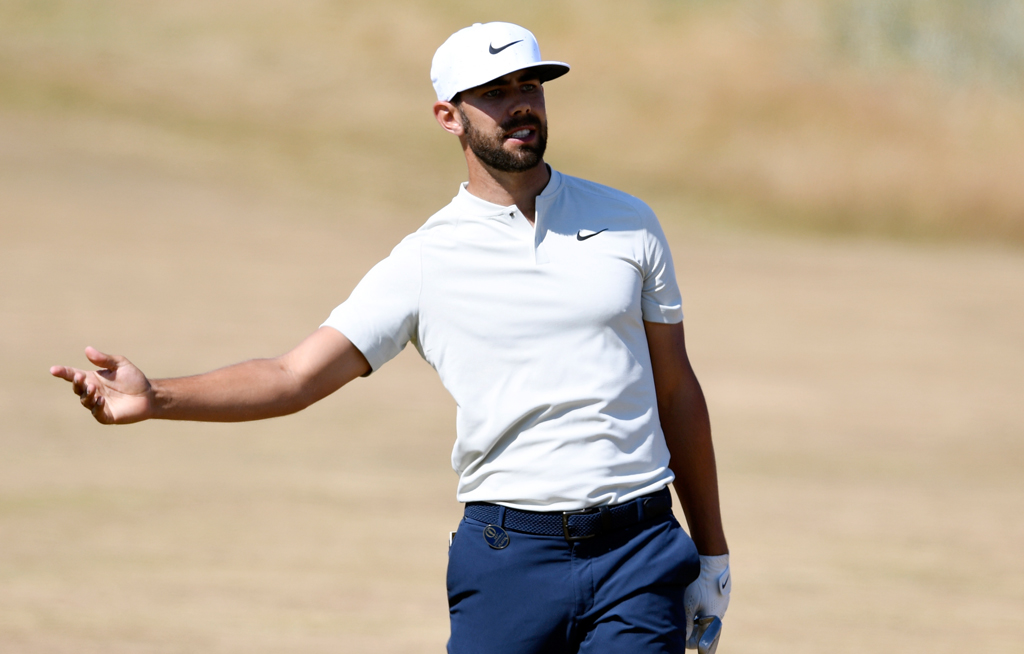 Erik van Rooyen of South Africa on the fairway on the first day of the British Open Golf Championship at Carnoustie, Britain, 19 July 2018.

CARNOUSTIE, Scotland - Despite an anxious wait on his final hole, South Africa’s Erik van Rooyen was able to nail a 10-footer for par and a second round 71 to remain in contention at four-under in The Open at Carnoustie Golf Links on Friday.

Have early leader Erik van Rooyen and @KevinTway ever been seen in the same place at the same time? TheOpen pic.twitter.com/W0rPMwq1Bj

Van Rooyen, who shot 67 in the first round, dropped his putter on his ball marker on the 18th green and had to wait several minutes before a rules official said he could replace his marker without penalty.

“I dropped my putter. I was standing over the coin looking at the hole, trying to get a feel, and it just slipped in,” said Van Rooyen.

“It was a little unnerving. I wanted to sort of get going and save par on 18, but I think having maybe just a couple minutes to calm me down helped… I actually got a little bit of a different read when I sat down and looked at it again.

“But it went in, so I’m happy to finish that way.”

Van Rooyen missed just two fairways in the first round but missed seven on day two. The Open debutant, however, did not let that affect him.

“It’s been two completely different days. Yesterday things were sort of just flowing really nicely, I hit a lot of fairways, a lot of greens. The ones I missed were on the fringe. As you know, with links golf, you can still putt from most places.

“Today was a little bit more of a grind, I missed a few more fairways, had to sort of battle and stay in my own bubble, and I think I did that. I stayed fairly calm. I think I missed it in decent spots.

One of the surprise packages of Day 1 is underway...

------?How will Erik Van Rooyen get on today in totally different conditions?

The cold Scottish rains descended on the course during the second round, and while it softened up the layout it was not necessarily easier said the 28-year-old.

American Zach Johnson (69 67) and Kevin Kisner (66 70) led on six-under in the clubhouse. They were joined by SA’s Zander Lombard who was two-under after eight holes to join the summit of the leaderboard.

Brandon Stone, who carded 68 in the first round, was one-over for the day after 16 holes as he dropped seven places to 12th.

Branden Grace was two outside the projected cut with rounds of 74 and 72 to lie on four-over. Charl Schwartzel on five-over after scores of 74 and 73 also looked likely to miss the weekend.

Dylan Frittelli battled to a 79 after his first round 71 which left him on eight-over and heading home.

Amateur Jovan Rebula will miss the cut after consecutive rounds of 79 to end on 16-over.