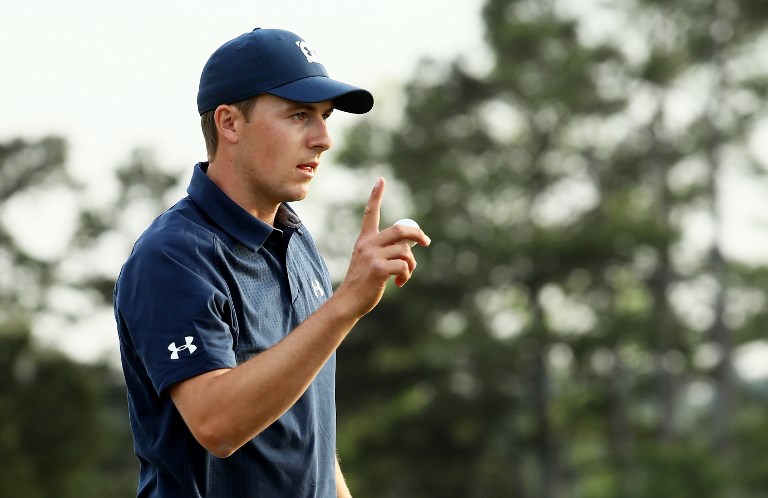 File: Jordan Spieth of the United States reacts on the 18th green during the first round of the 2018 Masters Tournament at Augusta National Golf Club on April 5, 2018 in Augusta, Georgia.

JOHANNESBURG - Tiger Woods felt the love, but it was Jordan Spieth who heard the roars as he surged to a two-stroke lead in the Masters Thursday with a scintillating six-under par 66.

Woods was back at Augusta National for the first time in three years, finally ready to challenge for a fifth green jacket after spinal fusion surgery last year.

Jordan Spieth finish his first round of theMasters in 1st place with a score of -6 pic.twitter.com/cZB42N36BQ

From the practice range to the 18th green, Augusta fans made him more than welcome, although his one-over par 73 gave them few real opportunities to cheer.

"It has been awesome this entire comeback," said Woods (42). "I got a standing ovation on the range. Coming up to the first tee, the people come out of the clubhouse and the putting green. They&39;re really into it."

The 14-time major winner grabbed his first birdie with a delicate downhill putt at the third.

File: Tiger Woods of the United States waves on the eighth green during the first round of the 2018 Masters Tournament at Augusta National Golf Club on April 5, 2018, in Augusta, Georgia. Credit: Patrick Smith/Getty Images/AFP

He followed, however, with back-to-back bogeys.

There was more trouble lurking around Amen Corner, where Woods was right off the tee at 11 and his shot from the trees hit a fan and dropped into the rough.

"It was a great shot there," said Woods, who ended up with a bogey. "Unfortunately people ran out and it clipped them. Otherwise, it&39;s just short right of the green, an easy up and down from there."

A dip in Rae&39;s Creek at 12 cost him a shot, although he limited the damage with an impressive 18-foot bogey putt.

He pulled strokes back at 14 and 16 and produced two crisp tee shots at 17 and 18 as he capped his round with a pair of solid pars.

"Seventy-three is fine," Woods said. "I could have easily let it slip away. And I fought hard to get it back and I&39;m back in this championship."

That bullish assessment came before Spieth caught fire, stringing together five birdies on the back nine as he seized a two-stroke lead over fellow Americans Matt Kuchar and Tony Finau.

The 24-year-old Texan, who has struggled to find consistency on the greens this season, was even through seven after two birdies and two bogeys.

Spieth rolled in a 14-foot eagle at the eighth, and two-putted from 40-feet for a birdie at 13.

He rolled in a nine-footer at 14, and his pitch at 15 left him a four-footer. Birdie putts from within 10 feet followed at 16 and 17 before a terrific bogey save at 18.

"I felt like I putted well, but I didn&39;t putt amazingly well. I just hit some really solid iron shots on that back nine to go with just some solid, inside of 10, 12 feet, putting," said Spieth, whose wire-to-wire Masters victory in 2015 was sandwiched between runner-up finishes in 2014 and 2016.

Spieth, the reigning British Open champion, added that for him the highlights of his round were the eagle and bogey saves at seven and 18.

In the trees off the 18th tee, he could only punch out to the fairway. But his fourth shot left him a tap-in.

"The way that I hit it is the way that I pictured it," he said of the chip. "Sometimes that happens, and most of the time it doesn&39;t."

Finau didn&39;t even know if he&39;d make it to the first tee after suffering a "pretty excruciating" ankle injury celebrating a hole-in-one in the par-three contest on Wednesday.

Has Tony Finau just dislocated his ankle and put it back in? ------ pic.twitter.com/VNHv4vwWgF

But once doctors told him he could do no further damage, he was determined to play and was rewarded with a debut Masters round that included six birdies and two bogeys.

File: Tony Finau of the United States plays his second shot on the 15th hole during the first round of the 2018 Masters Tournament at Augusta National Golf Club on April 5, 2018, in Augusta, Georgia. Credit: Andrew Redington/Getty Images/AFP

Kuchar had five birdies on the back nine to join him on 68.

Northern Ireland&39;s Rory McIlroy, who can complete a career Grand Slam with a first Masters victory, headed a group of seven players on three-under 69.

Li, the first Chinese man to crack the top 50 in the world rankings, moved to four-under with an impressive run of three birdies over Augusta&39;s Amen Corner trio of holes -- 11, 12 and 13 -- but dropped a shot at 18.

Spain&39;s Sergio Garcia endured a nightmare start in his bid to join Woods, Nick Faldo and Jack Nicklaus as the only players to successfully defend the Masters crown.

File: Sergio Garcia of Spain tips his cap on the 18th green during the first round of the 2018 Masters Tournament at Augusta National Golf Club on April 5, 2018, in Augusta, Georgia. Credit: Jamie Squire/Getty Images/AFP

Garcia matched the most strokes needed on any hole in Masters history with his 13 at the par-five 15th -- where he hit five consecutive balls in the water.

Garcia signed for a nine-over-par 81, tied for next to last place with amateur Matt Parziale.