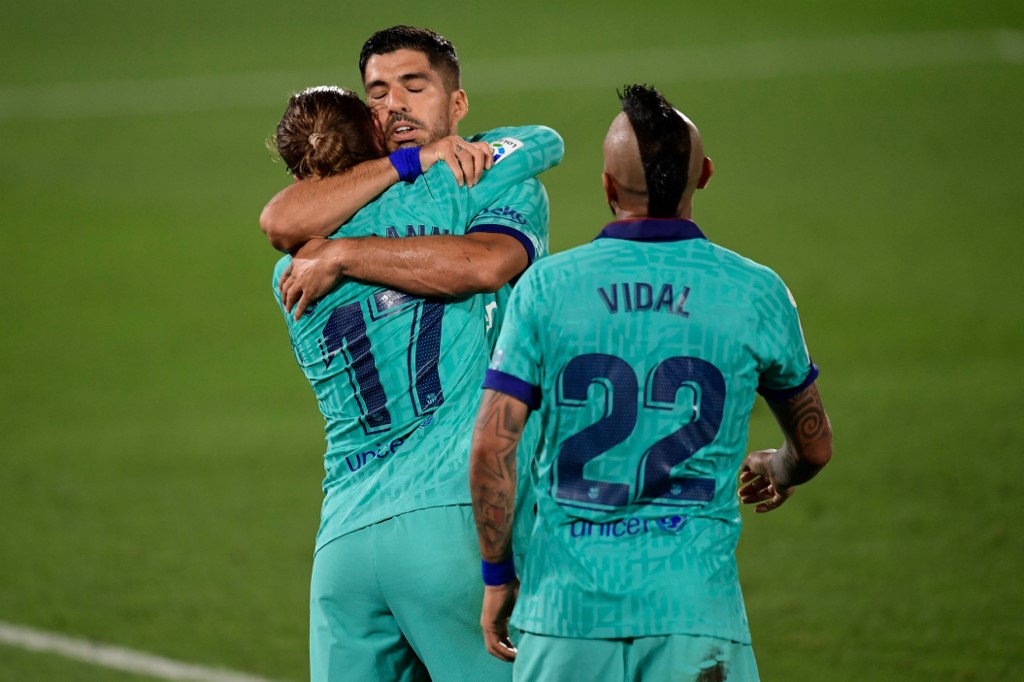 Barcelona's French forward Antoine Griezmann (L) celebrates with Barcelona's Uruguayan forward Luis Suarez (C) after scoring a goal during the Spanish League football match between Villarreal and Barcelona at the Madrigal stadium in Villarreal on July 5, 2020.

MADRID, SPAIN- Antoine Griezmann answered his critics in style on Sunday by scoring with a sensational chip as Barcelona thrashed Villarreal 4-1 to keep their faint La Liga title hopes alive.

After the humiliation of being brought on in the 90th minute against his former club Atletico Madrid, Griezmann was back in the starting line-up at La Ceramica and repaid the faith with a stunning goal, teed up by Lionel Messi.

"It was the kind of goal only great players can score," said Barcelona coach Quique Setien. "He played a spectacular match."

Messi also laid on a curling Luis Suarez shot into the top corner after Gerard Moreno cancelled out a Pau Torres own-goal that had put Barca in front. Ansu Fati then added a fourth late on.

An impressive victory for Setien's side reduces the gap back to four points behind Real Madrid, who earlier ground out another 1-0 win over Athletic Bilbao at San Mames, with a Sergio Ramos penalty proving the difference.

Madrid's resilient performance, and their third 1-0 victory in a row, offered a stark contrast to a goal-fest from Barcelona that was certainly easier on the eye but instructive on the title race too.

An end-to-end contest, full of chances for both sides, showed Messi, Suarez and Griezmann at their free-flowing best yet the defence was opened up with ease by Villarreal, who might have scored more.

Madrid's discipline and organisation has made them firm favourites with four games remaining.

"We needed this match a while ago," admitted Setien. "We have to keep adding points and we'll see what happens."

Griezmann had experienced his lowest moment since joining Barcelona on Tuesday in the draw against Atletico but this was the perfect response.

He celebrated his goal by sharing a warm embrace with Messi.

Villarreal looked a difficult opponent after winning five games out of six since the restart, a run that has put them in in touching distance of the top four.

This defeat leaves them three points behind Sevilla, who play Eibar on Monday.

The first half was perhaps the most entertaining in La Liga since the restart, with four goals and chances for two or three more.

Barca were ahead within three minutes, Torres diverting Jordi Alba's cross into his own net under pressure from Griezmann at the near post.

Ramos on the spot

But Villarreal were level 11 minutes later as a superb pass from Samuel Chukwueze sent Paco Alcacer scampering in down the right and he did brilliantly to switch to Santi Cazorla on the opposite side.

Cazorla's drive was parried but only to Moreno, who finished.

Messi laid on two sumptuous assists before half-time but the finishes were even better.

After chesting the ball down in the centre circle, Messi touched and turned, leaving his marker for dead.

He drove through two Villarreal defenders before pushing the ball left to Suarez, who arrived from the angle on the edge of the box and curled first time into the far corner.

If that was power, Griezmann's was finesse, Messi and Suarez combining before Messi dragged back to the Frenchman, who caressed a delightful chip over Sergio Asenjo and in.

Messi thought he had his goal in the second half but Arturo Vidal was offside.

Suarez was taken off, presumably rested, and Fati added a fourth off the bench. The teenager cut in from the left and pulled his shot back inside the near post.

After edging out Getafe on Thursday, through a Ramos spot-kick, Madrid repeated the trick at San Mames, their captain's nerve from the spot combining with a gutsy display for a pivotal win.

Ramos was perhaps fortunate not to concede a penalty himself late on when, off the ball, he seemed to slip and tread on the foot of Raul Garcia, but Madrid escaped.

Instead, the defender's 10th goal of the season, the best tally of his career, proved decisive.

"It's a massive win," said Ramos. "We knew today was going to be one of the biggest games that we have left.

"It's always a difficult game away at Bilbao and we saw it like that. We're happy with another crucial three points that put more pressure on Barcelona."