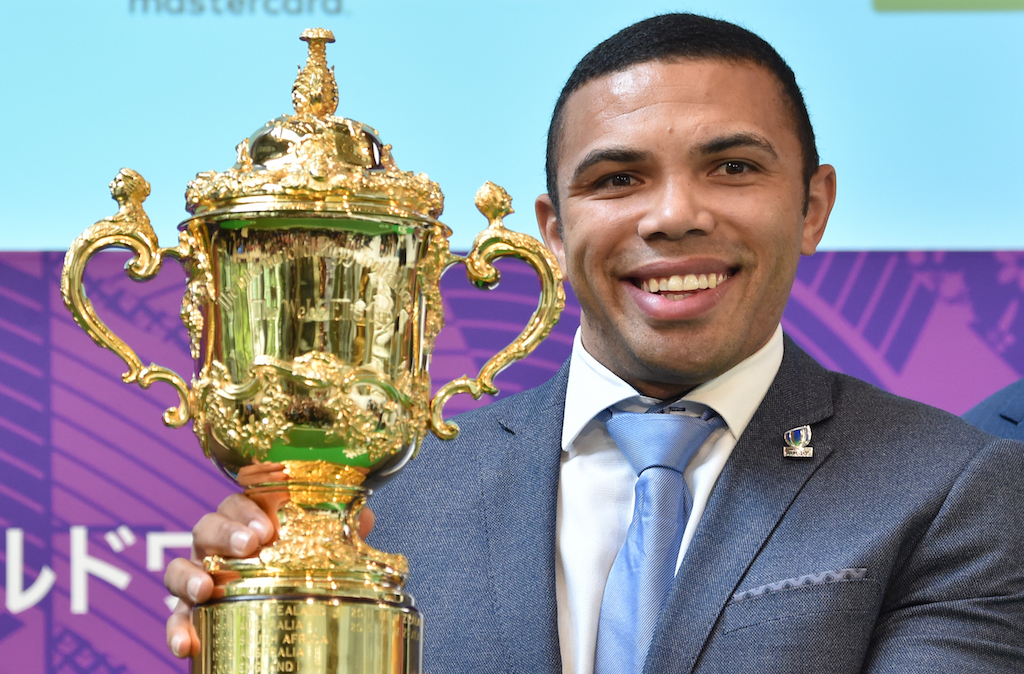 Bryan Habana poses with the Webb Ellis Cup during a 100 Days to Go Kick-Off event for the Rugby World Cup 2019 in Tokyo.

TOKYO - A 2019 World Cup victory for South Africa under captain Siya Kolisi could be as impactful as their historic win on home soil in 1995, former Springboks winger Bryan Habana said.

In June 2018, Kolisi became the first black man to captain the Springboks in a full test match and the flanker will hope to lead South Africa to a third World Cup title in Japan later this year.

For many, including Habana, Kolisi's promotion is a crucial step as rugby continues to break the shackles of its past image in a country where racial tensions in sport often spillover into politics.

"Rugby had just been officially opened to all walks of life in South Africa and having Nelson Mandela walking out on to Ellis Park is probably one of the most unifying forces that has ever happened in our country," Habana said in Tokyo.

"Having Siya Kolisi be the first black person to captain South Africa shows what our country is on route to and, given our history, that is very unique.

"If Siya has the opportunity to be the first black captain to win a World Cup outside of South Africa that will be pretty special, pretty inspirational and will give a lot of hope to people who need it a lot more than anything else."

Habana, the all-time leading Springboks try scorer and a World Cup winner in 2007, believes Kolisi has the right temperament and personnel around him to handle the pressure.

"He is grabbing the opportunity with both hands," Habana said at an event to mark 100 days until the start of the Japan 2019 World Cup.

"He brings something very different and very unique to his leadership, in terms of his energy and his passion for life.

"He has got some great leaders around him that make his job easy. You look at the likes of Handre Pollard, Duane Vermeulen, Lood de Jager - guys who captain their provinces.

Habana was hopeful Rassie Erasmus' team will be ready for the World Cup despite an inconsistent 18 months.

"I think if one looks at South Africa's record over the last 18 months it hasn't been great," admitted Habana, who has seen South Africa beat New Zealand and France but also lose to England and Wales.

"But then compare it to our run-in to the 2007 World Cup, when we lost 49-0 to Australia a year out from the World Cup and then a year later we went on to win it.

"What I think Rassie and Siya have got right is the balance of the side in terms of youth and experience.