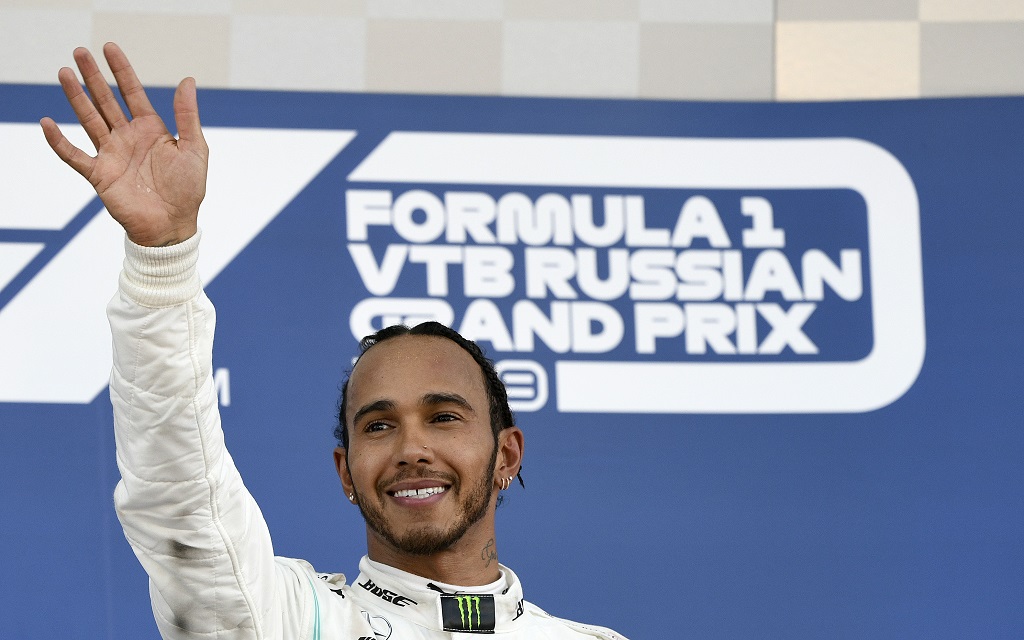 Winner Mercedes' British driver Lewis Hamilton celebrates on podium after the Formula One Russian Grand Prix at The Sochi Autodrom Circuit in Sochi on September 29, 2019.

RUSSIA - Lewis Hamilton seeks to equal Michael Schumacher's record 91 Formula One wins at the Russian Grand Prix in Sochi on Sunday despite fears over a potential coronavirus fall-out from allowing 30,000 fans to attend.

The six-time world champion is one win away from what once was believed to be an untouchable total, but he will be a clear favourite to succeed on a track where he has triumphed four times in six years.

He has also reeled off six wins in nine races this season to open up a 55-point lead ahead of Mercedes team-mate Valtteri Bottas in the title race, the Finn and former team-mate 2016 champion Nico Rosberg being the only other victors since Sochi arrived on the calendar.

READ: One race at a time, says Hamilton as sixth title looms

Another Mercedes win at the former home of the 2014 Winter Olympic Games would also be a record for most successive victories by a team at a single Grand Prix.

But all involved with the champions are aware that not only is the event set to be the first sporting occasion to host a major crowd in the COVID-19 era, but it will also see the team shadowed by a Netflix film crew.

The organisers say 30,000 spectators are expected and that the race is sold out.

The cameras will be recording content for the third 'Drive to Survive' series – and tip-toeing around their subjects, hoping to avoid a repeat of events in Germany last year.

Then, at the German Grand Prix at Hockenheim, run in teeming rain, Mercedes celebrated 125 years of motorsport with their worst performance of the season – a flu-struck Hamilton ending up classified ninth and Bottas crashing out from fourth.

"But this time, we hope we can have great content – and have a great race."

Hamilton, lauded this week as one of Time magazine's 100 most influential people in the world this year, has approached the race with humility.

"I never thought that I would be here, that's for sure," he said after his 90th career triumph at the Tuscan Grand Prix two weeks ago.

"It just does not seem real to me."

His greatest rival this weekend is likely to be team-mate Bottas, winner on the tight Sochi track in 2017, his maiden triumph.

The Finn has proved himself to be a force on the circuit that suits his style and knows he has to wreck Hamilton's party to stay in the championship race.

After two pointless exits with car failures, Max Verstappen of Red Bull will be seeking a return to his earlier form.

"It's not easy in Sochi and the track is not a favourite for us with a lot of long straights – it's not easy to overtake," he said.

While the 30,000 fans attending the Olympic Park circuit enjoy a rare glimpse of live sport, F1's top officials are reported to be anxious about the potential threat from coronavirus.

Russia has exceeded one million cases of Covid-19 – one of only four nations to do so – and after nine events run behind closed doors in strictly-controlled bubbles, this relaxation of the tight controls has not been welcomed warmly by all in the paddock.