Hussey hails 'focused and driven' Australia ahead of SA series 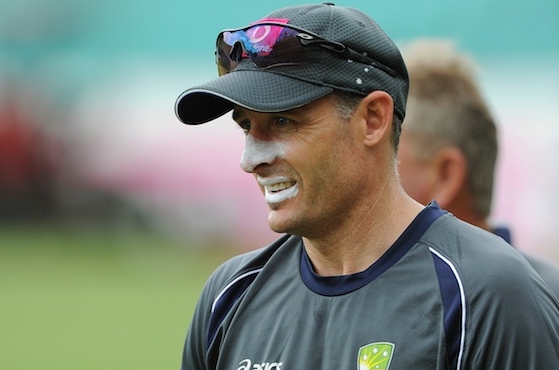 Mike Hussey is in South Africa with the touring Australian side as they prepare for the start of the three-match Twenty20 International series in Johannesburg on Friday.

JOHANNESBURG - Former Australia batsman Mike Hussey said on Tuesday he may not know exactly what his title is but he is delighted to be back with the team to help head coach Justin Langer build towards the Twenty20 World Cup on home soil in October.

Hussey is in South Africa with the touring Australian side as they prepare for the start of the three-match Twenty20 International series in Johannesburg on Friday.

"I'm not really sure what my title is, whether it is mentor or batting coach," Hussey told reporters on Tuesday. "But I don't really mind, I just want to get out there and help as much as I can and throw a lot of balls."

Hussey previously worked as a batting consultant for Australia at the T20 World Cup in 2016, and Langer has asked him to return ahead of the next edition of the tournament.

"I'm hoping to stay involved with the T20 team right through the World Cup," Hussey says. "It is a fantastic environment, I really like that the guys work so hard and there is some real excitement about the tournament that will be on our doorstep.

"They are focused and driven to do well and motivated to put in the performances that will get them into that squad."

Hussey said he had mostly been working with the middle-order batsman and welcomed the return of Matthew Wade, whose form in the domestic Big Bash T20 competition earned him the chance for a first international appearance in the format since 2016.

"I played with Matty Wade, and I really like the place he is in right now. I think he has a great understanding of his game.

"I am rapped that he has got an opportunity and I really hope that he can take it and cement his place in the middle order."

He expects the side to hit the ground running with the recent completion of the Big Bash, but said South Africa would also be in form after their tight 2-1 series loss to England.

"A lot of the guys are coming off Big Bash, so they have been playing really good cricket. I think it is going to be a tough challenge though; South Africa are a really good team and are coming off some tough cricket against England."

Following the series start in Johannesburg, the teams move to Port Elizabeth on Sunday and finally Cape Town on 26 February. They then clash in three One-Day International matches.