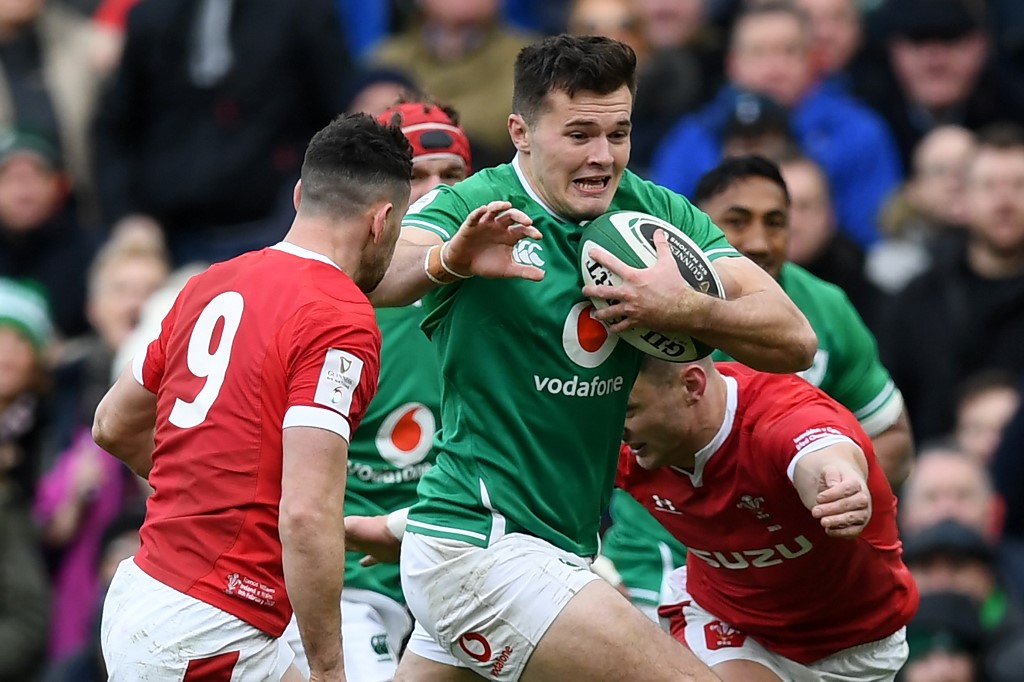 FILE: Ireland's wing Jacob Stockdale (C) runs with the ball during the Six Nations international rugby union match between Ireland and Wales at the Aviva Stadium in Dublin, on February 8, 2020.

Dublin - Jacob Stockdale insists Ireland can win the Six Nations as they prepare to return to action, even though England are firm favourites to claim the title.

Andy Farrell's side are fourth in the table, four points behind England and France, but those two teams have just one game remaining in the championship, which was put on hold by coronavirus earlier this year.

Ireland host pointless Italy this Saturday in an empty Lansdowne Road but face a far tougher task in Paris a week later against fellow title-chasers France.

Ireland can gain a maximum 10 points from their two remaining games but England are heavy favourites, with only a match against Italy to come.

"For us, as a team, realistically we've got a Six Nations to finish and we're never going to not aim for silverware," said Stockdale, who scored seven tries in 2018 as Ireland romped to the Six Nations Grand Slam.

"Realistically, for us, I think it's entirely achievable to get 10 points out of the next two games and pick up a trophy at the end of it.

"I think that's a realistic goal for us, something we'll definitely aspire to."

Stockdale is also eyeing glory in the Autumn Nations Cup, an eight-team tournament that replaces the usual tours by the southern hemisphere giants.

On a personal level, the wing is keen to end a try drought that has seen him try-less in his past seven Tests.

The Ulster star is his own harshest critic but has closed his social media accounts after receiving horrific abuse online.

"For me personally, I'm never going to deal well with disappointment," said Stockdale, who has scored 16 tries in his 28 Tests.

"That's part of having a competitive nature. It's always going to be a disappointment when you haven't played well.

"For myself personally, it's about being able to block out that outside and internalise how I'm feeling about the game and having two or three guys' opinions that I really trust and leaning on them for that is massive for me."

Stockdale said the Ireland coaching staff kept in touch during lockdown as much to check up on players' mental health as to give them playing tips.

He kept himself busy restoring a 1966 Mustang car he bought on eBay, phoning round for a mental health charity and getting engaged.

He said Ireland's players were battle-hardened after appearing for their provincial sides.

"It has definitely made the transition a bit more seamless, but from a coaching point of view and a cultural point of view, the team and management have done really well to make sure we're connecting really well and that we're talking things through and understanding each other again.

"You kind of forget how the lads around you want to play, certain nuances of the game."