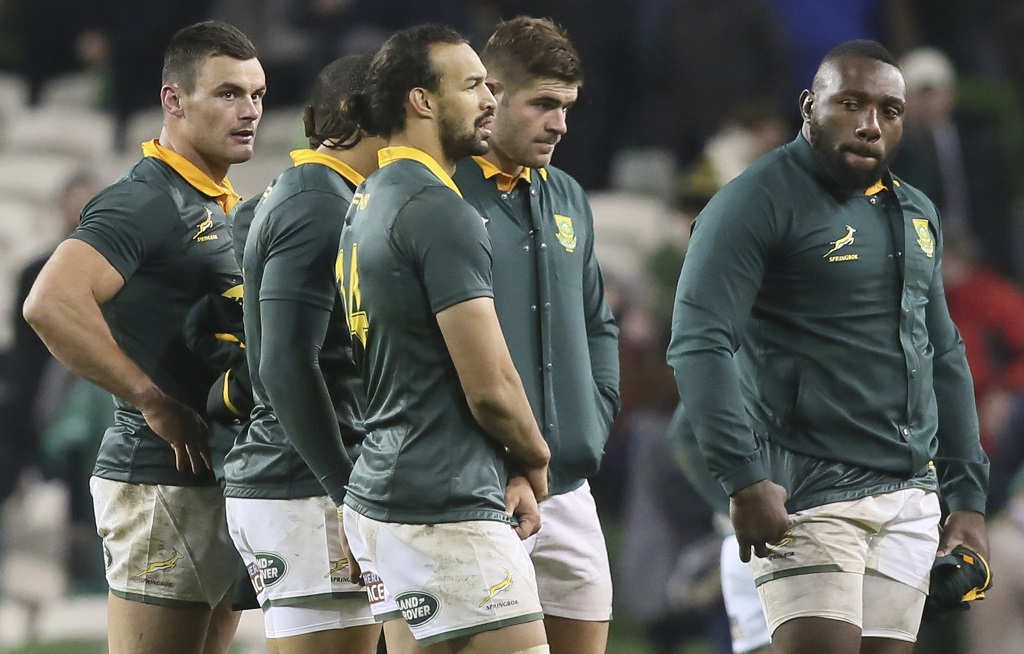 South Africa's players react to their defeat at the end of the rugby union international Test match between Ireland and South Africa at the Aviva Stadium in Dublin on November 11, 2017.

DUBLIN – Ireland recorded their biggest win over South Africa on Saturday with a 38-3 hammering at Lansdowne Road.

The Irish ran in four tries, three in the last 10 minutes, to extend the woeful Springboks winless run to five matches.

Especially pleasing for Joe Schmidt was the fact that three of his inexperienced players, Andrew Conway, South Africa-born hooker Rob Herring and the impressive Jacob Stockdale scored three of the tries. Rhys Ruddock nabbed the other.

Full time in the Aviva Stadium. Ireland 38, South Africa 3.
Great to get the Guinness Series off to a winning start. Thanks for all the support.TeamOfUs GuinnessSeries pic.twitter.com/6fVtLF9XXS

Debutant Bundee Aki gave the perfect answer to critics of his being selected under the residency rule in hammering prop Coenie Oosthuizen so hard in the second minute the latter -- who had only just been recalled to the side -- had to be carted off the pitch.

Johnny Sexton put the hosts into the lead two minutes later with a crisply struck penalty from long distance.

The Irish were causing the Springboks endless problems in the set scrum provoking the visitors to concede penalties and freekicks in desperation.

The Irish playmaker kept the scoreboard ticking over with another penalty, stemming from the best move of the match which saw wing Conway drive deep into South Africa territory, to make it 9-0.

The lively Conway then somehow collected the ball from his Munster team-mate Murray&39;s kick after Courtnall Skose made a hash of catching it and the 26-year-old scooted clear despite four Springboks being round him.

Sexton went close to adding the extras from the touchline but the Irish still held a healthy 14-0 lead after 25 minutes.

It took half an hour but finally South Africa put some pressure on the hosts inside their 22 only for Ireland&39;s South Africa-born No8 CJ Stander to win a penalty for his adopted country.

The Irish finished the half on the front foot deep inside Springbok territory but couldn&39;t add to their lead going in at 14-0.

South Africa got much-needed points early in the second-half, Elton Jantjes converting a penalty, taking him past the 200 point mark in Test rugby -- after Stander was penalised for a high tackle on veteran prop Tendai &39;Beast&39; Mtawarira.

What a win for Ireland! A record score against the Springboks.https://t.co/IjI2dktd6Vbbcrugby pic.twitter.com/nkQAZIPQvm

Sexton settled Irish fans nerves, after the hosts had started the half in scrappy fashion allowing the Springboks a glimmer of hope, with a penalty in the 55th minute to restore the 14 point lead.

The Sprinbgoks though could not put anything of note together in terms of moves and the Irish weathered the small tempest.

Ultimately the hosts then ran away with the match as first Ruddock went over -- just as he did the last time they met in Dublin three years ago -- after great work by Conway.

Then it was the turn of another replacement, Herring, to touch down and with the Boks now reeling, Stockdale -- who had been magnificent in defence -- went over in the corner after a stunning move.

Joey Carbery, who had come on for the imperious Sexton, converted it from the touchline to round off a sublime day for the hosts.