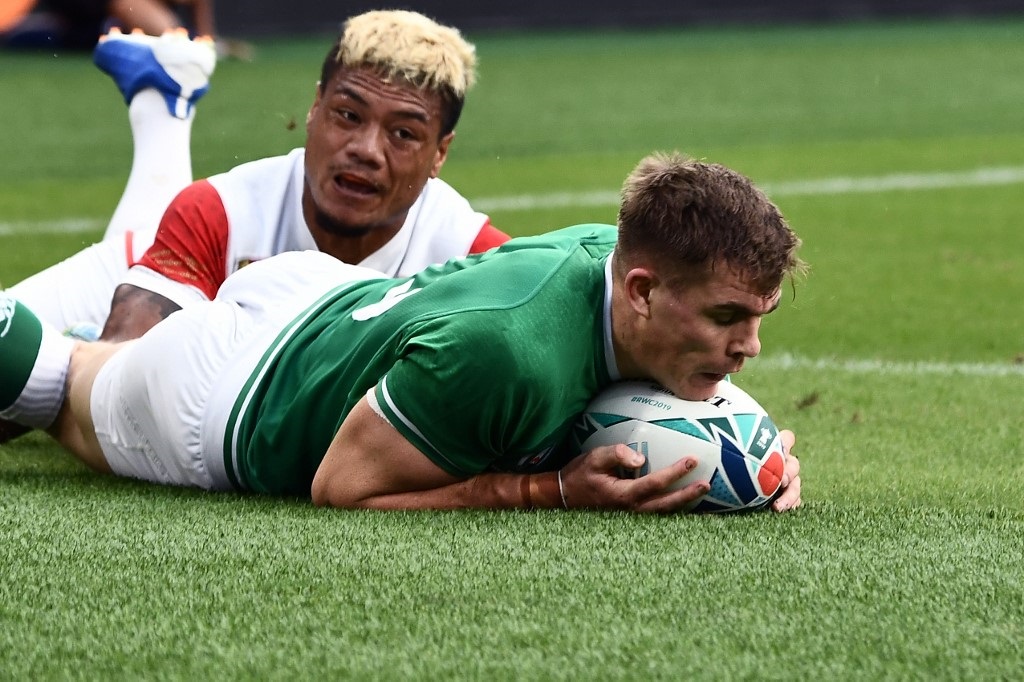 Japan's flanker Kazuki Himeno (C) is tackled during the Japan 2019 Rugby World Cup Pool A match between Japan and Ireland at the Shizuoka Stadium Ecopa in Shizuoka on September 28, 2019.

Ireland run out against Russia for their Pool A encounter in Kobe City looking to save face.

At this stage it is hard to say whether the fact that they are meeting one of the minnows so soon after their shock defeat is a good or a bad thing. They may have preferred to face slightly stronger opposition to prove that they can bounce back. This clash offers little more than the chance to boost some confidence and post a big score.

Pool A seemed very straightforward at the start of the tournament but Japan changed the complexion of the group slightly as they beat the Irish to go top. It also meant something of a lifeline for Scotland. Ireland should earn a bonus point against the Russians which would go a long way in putting the quarterfinals out of reach of the Scots.

The last time Ireland met this opposition was at the World Cup in 2011 and they ran in nine tries on that occasion for a 62-12 victory. With that likely to be the theme again, you can take 15/10 on number 11, 14 or 15 to score the first try of the game or the same price on any forward to dot down first.

There are very short prices on some of the Irish players to score at any time during the game but you can get 7/10 on CJ Stander or 11/10 on Johnny Sexton, who will realise a boyhood dream when he captains the side. There’s 9/10 available on Rob Kearney, who scored when these sides last met, to add a try of his own in this match.

For those who enjoy taking speculative bets on the number options you can take 9/10 either way if you decide the match total will end in an odd or even number. History tells us that the match totals of the two meetings between these sides ended in even numbers.

For Ireland, this match comes at a time when a confidence boost is much needed in their penultimate game of the group stages. A bonus point win would be just the tonic and you’d expect them to get it here.