James Anderson ruled out of second Ashes Test with injury 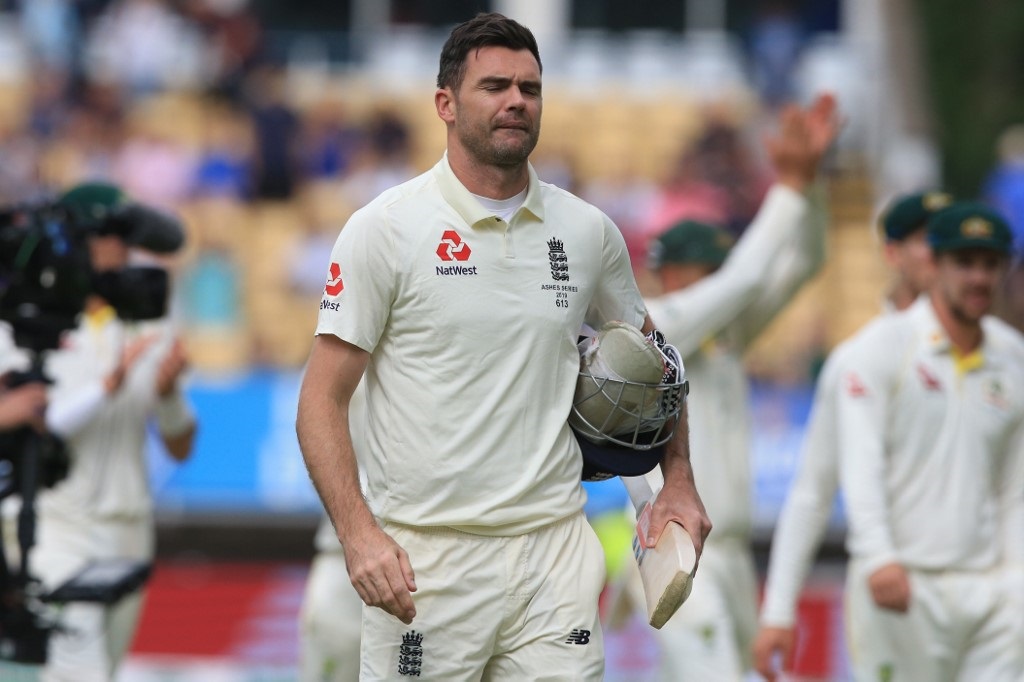 England's James Anderson walks from the field after England are bowled out on the fifth day of the first Ashes cricket Test match between England and Australia at Edgbaston in Birmingham, central England.

LONDON - James Anderson has been ruled out of the second Ashes Test, with England uncertain when he will be fit to return after injuring his right calf.

England's record wicket-taker broke down after just four overs in the series opener at Edgbaston and did not bowl again as Australia romped to a 251-run victory.

Scans have confirmed he has no chance of taking part in next week's game at Lord's, the second of the five-match series, with assessment taking place "on an ongoing basis".

Anderson's absence is a huge blow for England, whose deflating defeat in Birmingham came just three weeks after they won the World Cup.

After pulling up injured on the first morning in Birmingham, Anderson, 37, was restricted to two batting cameos at number 11.

The veteran, who has taken 575 Test wickets, had not played competitive cricket for a month leading into the match after injuring the same calf playing for Lancashire.

"The MRI confirmed that Anderson has suffered a calf injury," said a statement from the England and Wales Cricket Board on Tuesday.

"As a result of the injury, he will commence a rehabilitation programme working with the England and Lancashire medical teams.

"Anderson will miss the second Test match, which starts at Lord's on Wednesday, August 14. He will be reassessed on an ongoing basis."

Former England captain Michael Vaughan does not expect to see Anderson on duty again until the fourth Test at the earliest and warned his absence could have a big impact in both dressing rooms.

"My concern is you don't underestimate the psychological effect of Jimmy Anderson has on the England team, but also the positive effect it sends through the Australia team," he said.

"For them to arrive next week and the week after to know they won't be facing Jimmy... that is monstrous."

A debut for paceman Jofra Archer, one of the stars of England's World Cup campaign, could lessen the blow but he must first prove his own fitness for the five-day game.

He was carrying a side strain throughout the tournament and has been sent to play for Sussex 2nd XI to get long spells with the red ball under his belt.

England captain Joe Root had no regrets about including Anderson for the Edgbaston game, saying he had passed every medical test.

"It's one of those freak scenarios where he pulled up -- because it's the same calf, we're not sure whether it's a slightly different injury," said Root.

"Jimmy in those conditions, if he bowls 15 overs, things could have been very different in the first innings in general.

Root said picking Archer would not represent a gamble if he gets through the required workload this week.

"With Jofra, we're in a slightly different situation where he'll have played a lot of cricket in between and we'll have a clearer idea of where he's at," he said.

"We'll turn up to Lord's and make sure in the next few days we don't make any shotgun decisions."

READ: 'I'll go to bed dreaming of getting Kohli out,' says Anderson

England's defeat at Edgbaston means they face an uphill battle to wrestle the Ashes back from Australia, who have not won a Test series in England since 2001.

The home side have a number of issues to address aside from Anderson's absence, needing to shore up their batting and find a chink in the armour of Steve Smith, who made two centuries in the match.