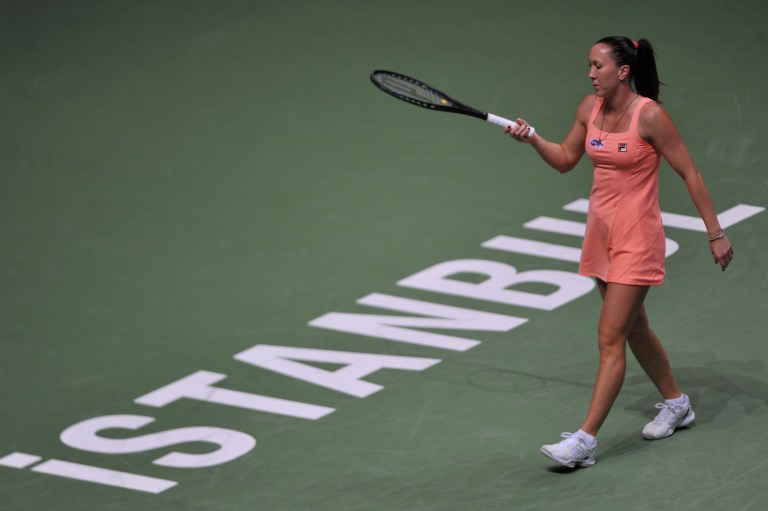 Serbian tennis player Jelena Jankovic reacts on October 26, 2013 during her WTA Championships semi final tennis match in Istanbul against Serena Williams of the US.

ISTANBUL - Former world number one, Jelena Jankovic, appeared to question Serena Williams&39; sportsmanship after losing a close three-set match to the game&39;s leading player in the semi-finals of the WTA Championships.

Williams, who claims to be exhausted near the end of a long season, reacted with fretful worrying, and sometimes distracting behaviour while struggling to a 6-4, 2-6, 6-4 two-hour win over Jankovic.

It included weeping into her towel, gesticulating and arm-waving, bending over and slumping, yelling and calling out, and both moving during the rallies and conducting the game at different speeds.

"I never saw her do this when she&39;s leading," Jankovic said of Williams&39; go-slow moments."

"You know, every time she has a lead, she&39;s running for the balls and she&39;s hitting those big serves."

"For some reason, every time she starts losing, she starts serving slower or not running for certain balls. That&39;s something that as a player you have to pay attention."

"But when it&39;s an important moment, a huge serve comes up, so you have to be on alert every time. You never know if she&39;s going to come slow or really fast one.&39;

"It&39;s not easy to focus. It&39;s important for me to focus on my game and not really let those kind of things affect me and not allow me to play my game, but it&39;s the way it is."

"She&39;s the number one player in the world, and she plays so well. She deserves to be in this spot. But I think also when you play, winning or losing, you have to be up there and be a good sportsman."

Nothing in the rules of tennis says a player shall not play at different speeds.

However Jankovic appeared to be suggesting there are ways of conducting yourself not covered in the rules but which are eloquent of your attitude to the game.

"You know, I think also sometimes it was difficult for me - I have a cold, and maybe if I started losing I could start dragging myself and not run for balls, and I can do the same. It&39;s how you want to play the game. That&39;s up to you," added Jankovic, again sounding critical.

Then Jankovic qualified her statements.

"And there is nothing wrong with that. We are all competitors, and you compete the way you want to compete. You have a game plan, and you execute it. I think at the end of the day, the most important is who goes through. Serena did that today, and well done to her."

Her comments sounded like a sequel to other feisty exchanges between the two.

At Charleston in April, Williams claimed she was not ready to receive serve and made Jankovic restart her service motion, telling her "you gotta wait," with Jankovic replying "how long do I have to wait?"

There followed further dialogue which was concluded with Williams saying: "Honestly, you got a problem? I&39;m not the one," retorted Williams.

Williams plays her last match of the 2013 season against Li Na in the WTA Championships final on Sunday.