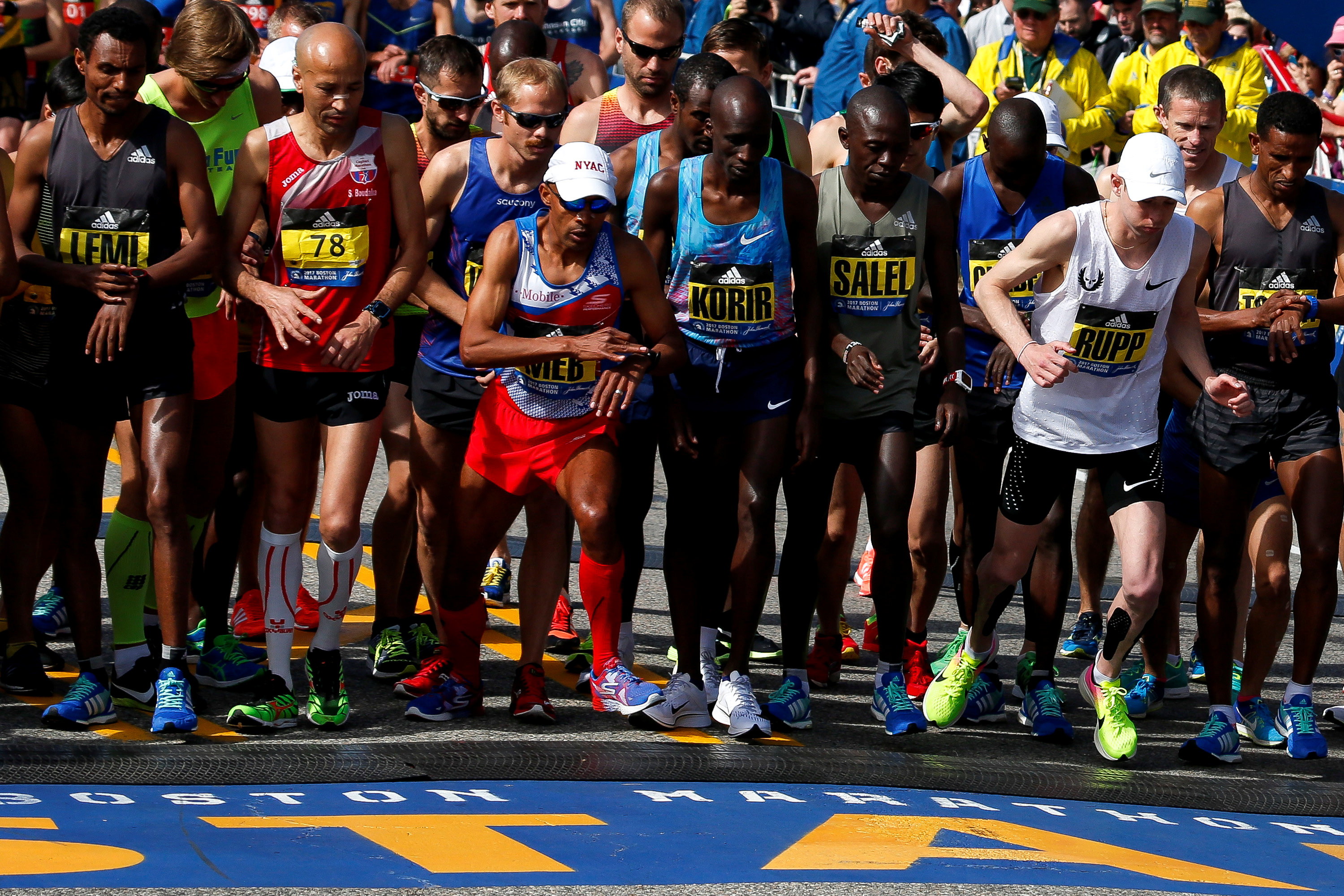 The elite men's runners leave the starting line for the 121st running of the Boston Marathon in Hopkinton, Massachusetts, US April 17, 2017.

BOSTON – Geoffrey Kirui and Edna Kiplagat led a Kenyan clean sweep at the 121st Boston Marathon on Monday, both timing late bursts to perfection to claim the men's and women's races of the prestigious event.

Kirui waved and smiled as he took the tape in a time of 2hr 9min 37sec, with Rupp finishing in second.

It was a masterful performance from the young Kenyan, who made his move with a 4:52 mile at the 22-mile mark that saw him pull clear of Rupp.

Rupp battled desperately to stay in touch but was unable to respond as Kirui kept the pace up to leave the Oregon-based American in second in 2:09:58. Japan's Suguru Osako was third in 2:10:28.

Kirui's time was well outside the world marathon record of 2:02:57 set by Kenya's Dennis Kimetto in Berlin in 2014.

Kirui later revealed he had pulled clear of Rupp after deciding to "test" his own finishing power.

"I saw he (Rupp) was a strong guy. Not easy," Kirui said. "So I tried to push a little bit to test myself. And I saw that he had not come with me, so I pushed a little bit more."

Kirui said he now planned to concentrate on marathon running after failing to find success in track events.

Your women's champion of the 2017 Boston Marathon, Edna Kiplagat! pic.twitter.com/GRW0uhYHV4

"I tried many times in the track but I see my future in marathon," he said.

In the women's race, Kiplagat conjured a similarly decisive burst over the closing stages to claim the race for the first time.

The 2011 and 2013 world marathon champion took the tape in 2:21:52 after breaking away from the field with around eight miles to go.

Kiplagat, 37, was greeted by her children and family members as she crossed the line.

Rose Chelimo, the Kenyan-born runner who now represents Bahrain, was second in 2:22:51 while Jordan Hasay of the United States was third in 2:23:00.

The Kenyan double came as a welcome boost for the East African superpower of long-distance running. Kenyan athletics was left reeling earlier this month after news that Kenya's 2016 Olympic women's marathon champion Jemima Sumgong had failed a drugs test.

Kenya was last year admonished by the World Anti-Doping Agency (WADA), which accused the country of non-compliance with its anti-doping code.

The Boston Marathon is the world's oldest annual marathon and one of the most prestigious races over the distance on the athletics calendar.