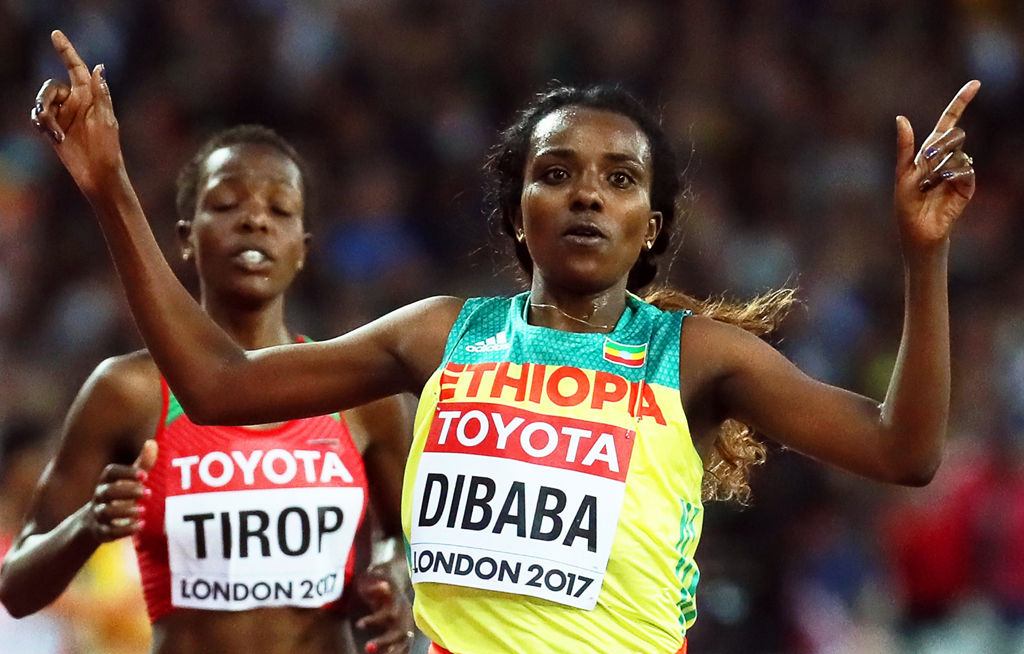 Ethiopia's Tirunesh Dibaba (R) celebrates while crossing the finish line to take the second place in the women's 10,000m final at the London 2017 IAAF World Championships in London, Britain, 05 August 2017.

But Kimetto is a bit of a mystery this time around, having failed to finish two of his four marathon starts since 2014, including this year's Boston Marathon in April due to an injury.

Kenya's Stanley Biwott, the 2015 New York Marathon winner, was second at London last year in 2:03:51, making him second-fastest in the field Sunday in his Chicago debut.

And Olympic runner-up Feyisa Lilesa of Ethiopia, last year's Tokyo Marathon winner, comes to Chicago off a New York Half Marathon triumph. He was third at Chicago in 2010 and second in 2012.

Training is good with 2 weeks until the @ChiMarathon pic.twitter.com/SbqeFTrGw9

The defending Chicago champion is Kenya's 35-year-old Abel Kirui, the 2012 London Olympic marathon runner-up who captured world marathon titles in 2009 and 2011 and edged Dickson Chumba by three seconds last year in 2:11:23. Kirui was fourth at this year's London Marathon.

Ethiopia's Zersenay Tadese, 35, was eighth in the 10,000m in Rio and is hoping to complete a marathon for the fourth time in his career.

Dennis Kimetto is CR at Chicago and also WR holder, how will he fare in #chicagomarathon, #bankofamerica, #nike, #abbottwmm, #adidas, pic.twitter.com/O9nkbKqpoE

Dibaba won 5,000 and 10,000 gold at the 2008 Beijing Olympics and defended the longer crown four years later in London. Last year in Rio, Dibaba was third in the 10,000 with the fourth-fastest time in history.

Now she is chasing the Chicago Marathon women's course record of 2:17:18 set by Britain's world-record holder Paula Radcliffe in 2002. And Dibaba won at London in April in 2:17:56, becoming the third-fastest woman at the distance on a similar flat course.

"I've always been building to marathons," Dibaba said. "I want to use my 10k foot speed and make history."