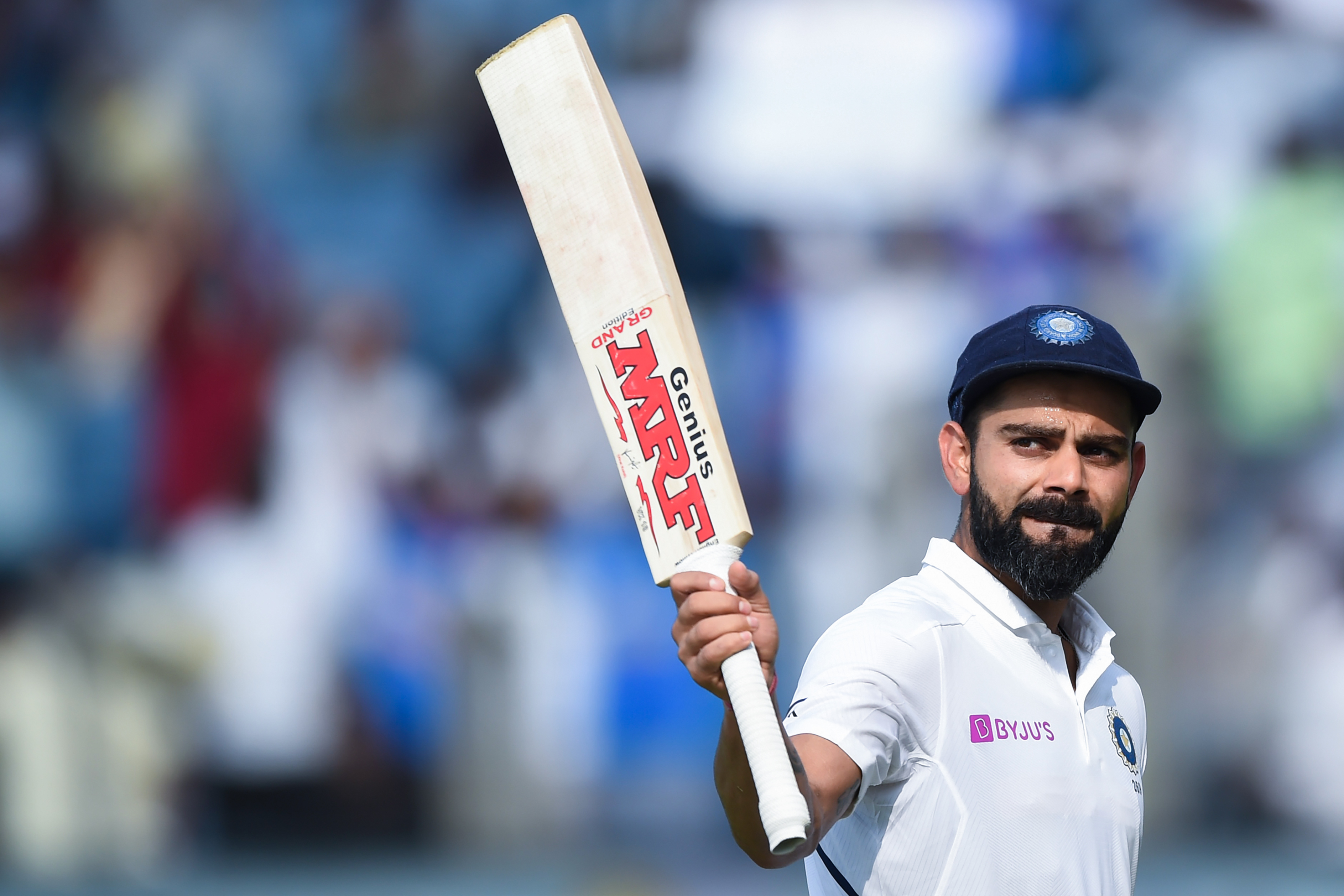 File: Skipper Virat Kohli struck a dominant century in India's maiden day-night Test to put the hosts on course for a big first-innings lead over Bangladesh on Saturday.

PUNE - Skipper Virat Kohli struck a career-best 254 not out as India declared their first innings on 601 for five on day two of the second Test against South Africa on Friday.

Kohli, who recorded his seventh double hundred soon after tea, put on 225 runs with Ravindra Jadeja to pulverise the South African bowling in Pune.

Jadeja was out attempting a big heave off-spinner Senuran Muthusamy and was caught at long-off for 91 as Kohli walked off with his partner to have a go at the opposition batting in the final session.

Playing his 50th Test as captain, Kohli surpassed batting great Don Bradman's tally of 6,996 runs and then swept Muthusamy for two runs to reach 200 in his 81st match amid a standing ovation.

The benchmark puts him in the top 50 Test run-getters, a field led by Indian icon Sachin Tendulkar with 15,921 runs in 200 matches.

Muthuswamy had Kohli caught at slip on 208 with his left-arm spin but TV replays showed the bowler had overstepped the line and the delivery was a no-ball.

Kohli and Jadeja soon launched an attack against the opposition bowlers with a string of fours and sixes from the right-left batting pair.

King Kohli, as he is fondly called by the Indian media, smashed Muthusamy for a boundary to go past his previous-best Test score of 243 and returned unconquered with 33 fours and two sixes.

Jadeja completed fifty in 79 balls and hit eight fours and two sixes in his 104-ball blitz.

The skipper started the day on 63, surviving hostile fast bowling from Kagiso Rabada and Vernon Philander.

He brought up his hundred before lunch with a delightful straight drive for a boundary off Philander.

His 178-run stand with overnight partner Ajinkya Rahane -- who made 58 before becoming spinner Keshav Maharaj's 100th Test victim in the only wicket to fall Friday -- took the attack to the opposition bowlers.

Agarwal made 108 and put on 138 for the second wicket with Cheteshwar Pujara, who scored 58, after India elected to bat first.

Rabada took three wickets on Thursday to return figures of 3-93.

A series victory for India, who won the first of the three Tests on Sunday, will see them beat the record of 10 straight home series wins they share with Australia.