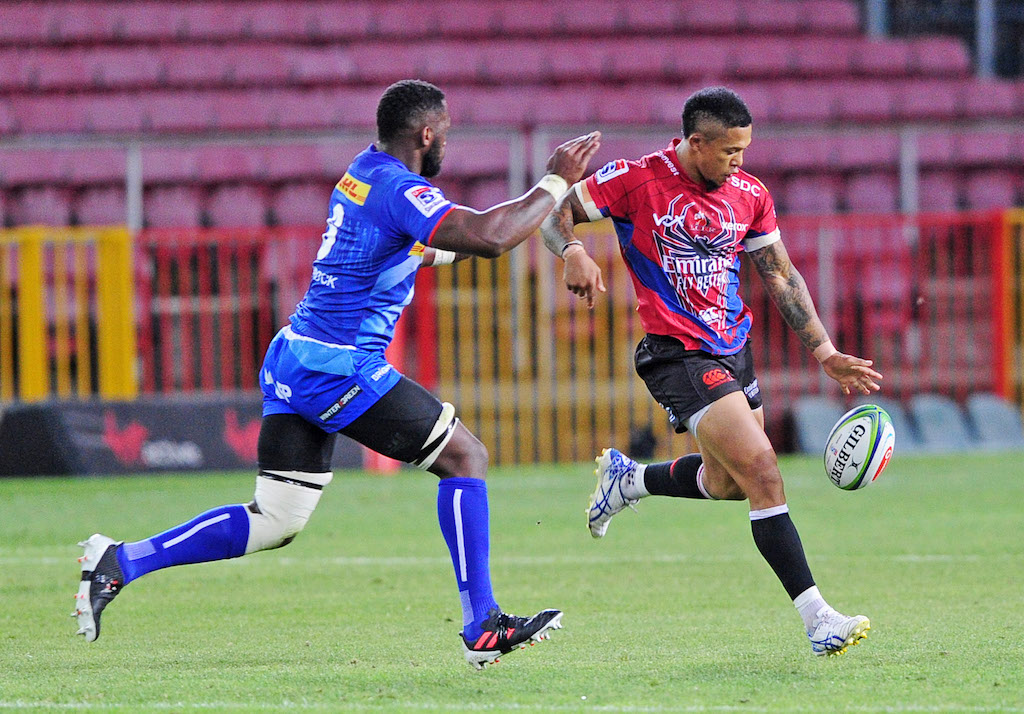 Elton Jantjies of the Lions kicks ahead as he is challenged by Siya Kolisi of the Stormers during the 2020 Super Rugby Unlocked game. BackpagePix/Ryan Wilkisky

Earlier, the Pumas upset the Griquas 27-21 in a game that kicked off in 37 degrees Celsius (98 Fahrenheit) heat between teams considered the weakest among the seven contenders.

A much improved second-half performance behind closed doors brought the Cape Town-based Stormers success at their Newlands stadium as they scored 17 unanswered points before surviving a late Lions rally.

It was the Stormers first match since rugby in South Africa was suspended due to the coronavirus pandemic.

They lie third in the standings with a match in hand, five points behind frontrunners the Cheetahs, who have won twice at home.

Kolisi, who skippered the Springboks to victory over England in the World Cup final in Japan last November, admitted his star-stacked side need to improve.

"There were a lot of individual errors from all of us during the first half and we were lucky to be only four points behind at half-time," said the flanker.

"We acknowledged our mistakes during honest half-time exchanges and the team played much better in the second half.

"A victory earns four points, however it is achieved, and we will move on and prepare to face the Pumas.

"There is a lot of room for improvement and I anticipate a much better performance in our second outing."

The Stormers, whose starting team included seven World Cup winners, had a bye last weekend when the seven-round domestic version of Super Rugby kicked off.

"We were constantly being penalised at the breakdowns, which kept putting us on the back foot and impeded our attempts to play with rhythm.

"What encouraged me, though, was that we performed much better than against the Sharks and this new group of players is beginning to gel.

"At least we have taken bonus points from our first two matches and it will be nice to have home advantage next weekend when the Cheetahs visit Johannesburg."